IT WAS A perfect travel day, with crystal blue skies and white puffy clouds floating above us. My husband, Jim, and I, along with our friend Patti, were headed from Mexico City, where we'd been basking in the artistic legacy of Frida Kahlo and Diego Rivera, to Oaxaca, where we would soon experience our first Dia de los Muertos--Day of the Dead. Our spirits were high. 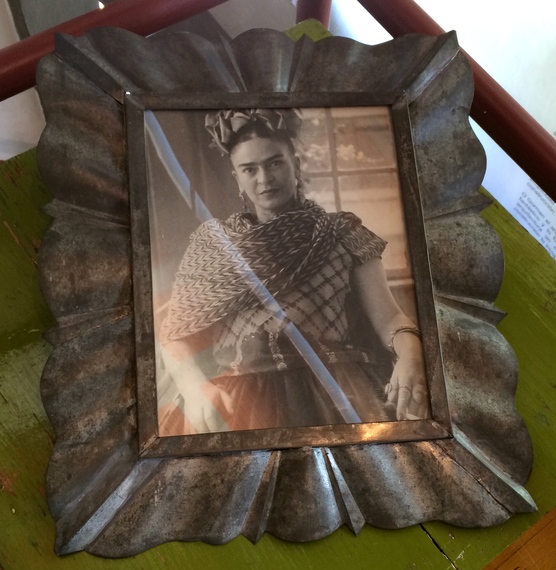 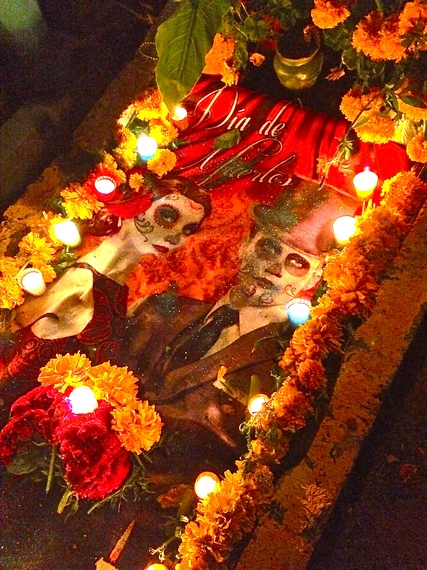 A Grave at The Day of The Dead Celebration in Oaxaca, Photo by Beth Arnold

The trip from Mexico City to Oaxaca is about 300 miles. Once we boarded and settled into our comfy seats, we closed the shades, adjusted the a.c. vent, and eased our seat backs for the trip ahead. While Jim did some work on his computer, Patti and I watched Cormac McCarthy's The Road, which was perfectly apropos since we were on the road ourselves--riding a Mexican bus. 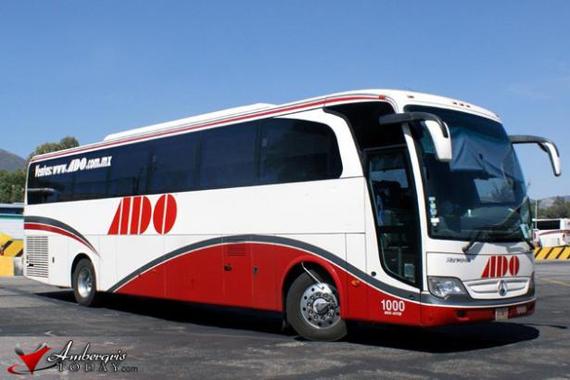 Yes, rather than enduring the time suck and hassle that air travel anywhere now promises--the long, expensive taxi ride to the airport, the shoving, surly crowds, and the chaotic security and boarding processes--we opted for a Mexican bus. "Did it have chickens on board?" too many Americans have asked me. In fact, not only were the buses new, clean, and generally luxurious, so were the bus stations we encountered. Our calculation was that a less expensive five hours of riding comfortably while enjoying the countryside beat an hour and a half of flying over it--with all the logistical trouble that would've entailed.

Are you old enough to remember when air travel was a delight to experience? When people dressed up to jet through the skies? When seat size and space between rows was generous? When full meals (included in the fare) were served on real dishes with metal cutlery? When passengers could enjoy a complimentary glass of wine before lunch and dinner? Once upon a time, air travel was civilized. And, in fact, it couldn't have been more pleasant. Generally.

But over the past decade or so, we've seen the airline industry--especially the U.S. airline industry--gradually reduce their "services" to customers to the point that the phrase airline service has pretty much become an oxymoron. (At least the cheap European airlines clarify their lack of service up front and don't try to disguise it with spin--and they charge less.) The disgusting level of corporate greed that U.S airlines have implemented in their policies--and that reveals utter disrespect toward their customers--is no reflection on hard-working flight attendants who are stuck with carrying them out. But for passengers, the whole air travel experience has truly become abysmal while airline profits are solidly up.

I remember the first time I flew from Paris to San Francisco when United Airlines offered Economy Plus® seating. When I heard about it, I foolishly thought the company was giving its transatlantic passengers a viable middle ground between Economy and Business classes. Since I was living in Paris and was a frequent overseas flyer, and this extra bump was only maybe $20, I jumped on it. Wow, I thought, this is how I'll fly from now on.

I soon realized I was wrong. This low price was United's way (a tactic often used by companies introducing new services of all kinds) of enticing its customers into enjoying more space and comfort, especially on long routes. Then, once they get used to it, the company jacks up the price. In the case of Economy Plus® seating, the extra $20 turned into $50 or more, and this upgrade had to be paid separately for each leg of your journey. Soon each ticket was significantly more expensive if customers gave themselves this little bit of Economy Plus® luxury. 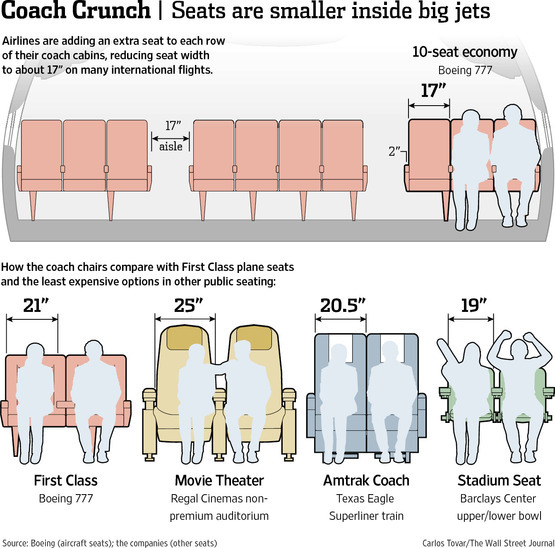 Via the Wall Street Journal and Boeing, (aircraft seats); the companies (other seats)

The next move--and all the Big Four airlines (American, Delta, United, and Southwest) made it--was to reduce the pitch and width of their Economy seats, so what first seemed like a teeny touch of Economy Plus® opulence soon turned into the only way one could fly without being squashed the entire trip. As the airlines crammed in more and more seats--and rows--to increase their profit margins, they decreased their customer satisfaction proportionately. And the airlines' standard line--I don't know how their employees can bring themselves to deliver it--is that they're offering "a variety of seating choices" for their passengers.

Previous to this new "service," the airlines had started dismantling the entire process of consumer airline travel and repackaging each part as a separate profit center. We saw meals drop away, then free baggage and movies--basically anything that could be separated from the price of the not-big-enough seats. In this way, items that had previously been part of the airline's basic service now cost extra.

The first time I saw an experience divided for more revenue streams was at Elvis's home, Graceland, where we used to have to take out-of-town visitors. In the distant past, the price of a ticket meant a visitor could see Everything Elvis--the house, the plane, the cars. But then they changed it so that the basic ticket only covered the house itself. The more you wanted to see, the more you had to pay. Soon others caught on to this idea, which my husband and I call The Graceland Syndrome. 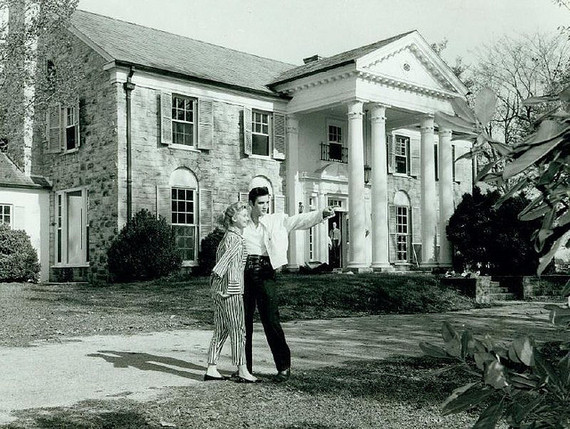 But none embraced it more than the airlines.

Did the corporate bigwigs anticipate the repercussions? Charging for baggage resulted in more and more customers carrying on their bags instead of paying for checking them, which in turn made the boarding process increasingly unpleasant as customers jockeyed to board first so they'd find room to stow their bags. Inevitably, there became too many bags for the onboard space provided, and some customers made an art out of waiting till the last minute for airline personnel to offer free checked bags. Not to mention there was more aggression about space, period. To add insult to injury, some airlines are trying to solve these problems by charging for carry-on baggage.

A few weeks ago, I wasn't surprised when I read that the U.S. government is investigating possible collusion among the big four U.S. airlines to limit available seats and to keep airfares high. The Justice Department's civil antitrust investigation will focus on whether these airlines illegally signaled to each other whether they would add new routes, flights, and extra seats.

I'm sorry, but who's surprised? Is it too much to ask for the Big Four to lower their tremendous profits a tad and put their customers first?

Like most people traveling, I'm not lucky enough to fly First or Business Class, except very occasionally. And like most people, when I do travel by air I'm irritated by the unpleasant experience that is shoved down my throat at increasingly high cost. Air travel has become what many Americans derisively compare to "bus travel."

Meanwhile, Jim, Patti, and I rode a very comfortable Mexican bus instead of flying to Oaxaca. While Jim read the pages of the document he was editing, Patti and I leaned back and watched Viggo Mortensen protect his cherished son as they battled the vicissitudes of being alone on a post-apocalyptic road.

Interestingly, at a movie theater recently I saw a very slick commercial for a new and improved Greyhound, complete with plush seats, air conditioning, and WiFi. When was the last time you saw a bus ad? This one seemed aimed at a new, younger generation of travelers. The airlines had better take note. 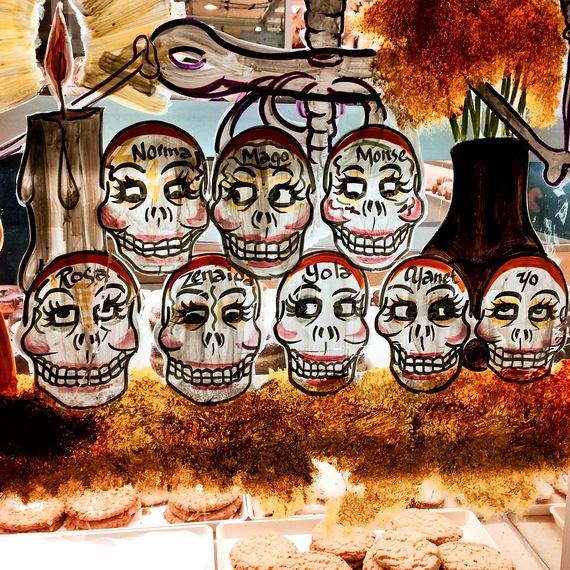 Beth Arnold is an inveterate traveler, an exile returned from Paris, a writer who has been traveling across the U.S. and observing the current culture here. You can see more of her work at BethArnold.com, where in her Letter From Paris she observed the culture of France. She has also been working on an Internet startup for gifting called Cherrypic'd. CherryPic'd is connecting people to people and the gifts they want. Go to CherryPicd.com to be part of the first wave of CherryPic'd Users!