An electronic billboard in Caldwell, Idaho that compares President Obama to James Holmes, the 24-year-old man accused of killing 12 people in an Aurora, Colo., movie theater on July 20, has sparked outrage in the community, reports The Idaho Statesman.

The billboard often features anti-Obama messages, and is sponsored by The Ralph Smeed Foundation, the supporters of the late activist for libertarian causes in Idaho. Foundation member and former state lawmaker Maurice Clements, told The Idaho Statesman the billboard is a response to Obama's 'broken promise' to bring home the troops.

"We’re all outraged over that killing in Aurora, Colo., but we’re not outraged over the boys killed in Afghanistan,” Clements explained to the paper, and added that he's not trying to connect Obama to Holmes, he's just comparing the way society reacts. "We’re not saying that Obama is a lunatic,” he said.

Regardless of what the billboard is really comparing, the message is not going over well with the area's residents, who are outraged, calling it "offensive," "abhorrent," and "pathetic," reports NBC News.

"This billboard is offensive to all those lives lost and affected by the shooting," wrote Fabiola G. Monrroy on the Facebook page of KBOI-TV, which first reported the story. "Just pathetic, even if this is their expression of the 1st amendment."

Most of the messages on the TV station's Facebook page echo Monrroy's sentiment, and Canyon County Democratic Party communications director Judy Ferro, told the Idaho Press-Tribune that she believes that even the late Ralph Smeed would object to it. “There’s no factual basis to it at all … it’s just offensive," she explained. 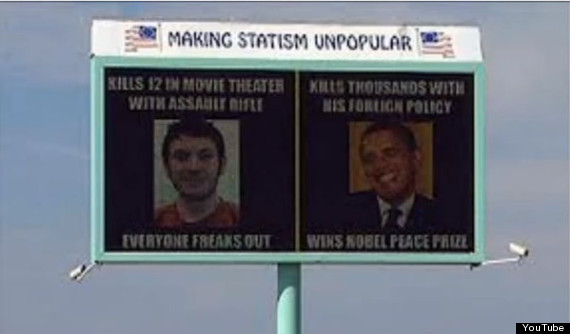