"God makes it clear in Scripture that deaths of people and livestock at the hands of savage beasts is a sign that the land is under a curse. The tragic thing here is that we are bringing this curse upon ourselves."

Who wrote this assessment and what is he referencing?

In a recent editorial posted on the website Rightly Concerned, established by an organization called the American Family Association, Bryan Fischer, former chaplain of the Idaho state senate, suggests that there should be an open hunting season imposed on Yellowstone grizzly bears. 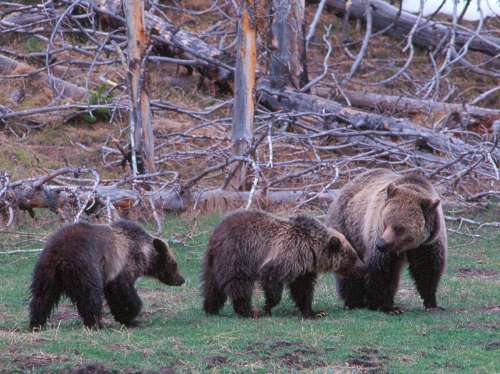 His implication is that the biological recovery of grizzlies in the environs encompassing Yellowstone National Park is a "curse" allegedly confirmed by Biblical scripture. While many would argue, in rebuttal, that saving grizzlies from extinction in the Lower 48 States has, in fact, been a major conservation success story and a sign of hope for dwindling wild carnivore populations around the world, Fischer suggests that because the bruins have had dangerous mortal run-ins with people and prey upon domestic livestock, that the rare creatures should be eliminated.

In addition to condemning grizzlies, which today inhabit less than four percent of their original range in lower North America, Fischer goes on to dismiss human-caused climate change -- a position that puts him at odds with leading clergy from all of the major religious faiths. Those people of faith do not regard science and conservation biology as a threat to spirituality, but confirmation that the Almighty bestowed Homo sapiens with a brain capable of intelligence to coexist.

There were two human fatalities caused by grizzly bears in the intersecting region of Wyoming, Montana, and Idaho this year -- a rare occurrence even as grizzlies expand their range. At the same time, Yellowstone National Park notched record visitation, much of it driven by millions of people and their families who want to catch sight of grizzly bears and wolves. Thousands of wildlife photographers and artists also converge upon the park to gather reference material. Around 600 grizzlies inhabit an ecosystem that covers 18 million acres or nine times the combined areas of Delaware and Rhode Island.

As statistics illustrate, it is more dangerous to hike through an area that has grizzly bears than a wildland that does not, but not by much. But it is also more exhilarating, inspiring, and satisfying to have places where wildness -- God's creation, if one wishes to call it that -- has not been ruined.

And degree of danger is relative. The odds of being attacked by a grizzly bear in the Greater Yellowstone Ecosystem are far less than being injured in an auto wreck on the way to the local market, being struck by lightning, and choking on food at the dinner table.

Kerry Gunther, Yellowstone's chief grizzly biologist, prepared data that shows over a recent 22-year period 62 million visitors came to Yellowstone and notched some 17 million hours camping outdoors. Of those 62 million people, 32 were injured in encounters with bears, many of the incidents caused by humans getting between mother bears and cubs, stumbling upon a place where bears were feeding on an animal carcass or as the result of bears that had become conditioned to human food. Gunther figured that the odds of being attacked by a grizzly in Yellowstone are one in 2,000,000.

The National Weather Service reports that the odds of being struck by lightning are one in 500,000. Is the reverend Fischer also cursing the sky?

To read Fischer's condemnation of grizzlies, based on a rather sensationalized story that appeared in the Los Angeles Times, click here.