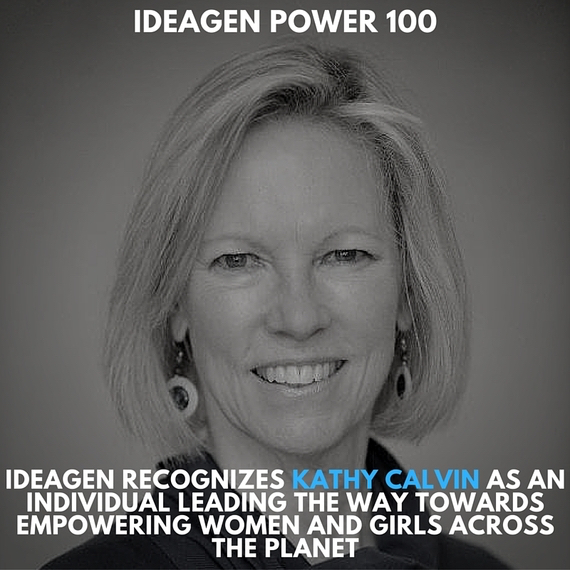 George Sifakis:
Welcome to Ideagen Ideas Leader Radio. Today we have an exclusive interview with one of the 2016 Ideagen Power 100, UN Foundation President and CEO, Kathy Calvin.

Sabrina (Ideagen):
I do really find it interesting that you say Ted Turner's goal was to be innovative and bold, and so is the UN Foundation. Going off of that what inspired you to join the UN Foundation?

Kathy :
Well, I hadn't worked in the non-profit sector and when Ted and the former president Tim Wirth invited me to join, I thought, "Wow. What do I know? What could I bring?"

I'm not a foreign policy expert, but in the end what inspired me was that I could see something big was happening in the non-profit sector. It was really becoming the place to be ... lots of innovation, lots of exciting opportunities to engage and make a difference. I thought the UN was the biggest brand around and would be a really interesting place to try to promote the partnership idea which was just becoming an idea at the time, about 15 years ago.

Lastly, I realized that one of my strengths and assets is that I'm pretty good at translating. At AOL I translated the new internet world to non-techies. When I was in politics I translated the candidates views to voters.

I love that I can help translate what the UN does on a daily basis to save lives and keep girls in school and ensure refugees have assistance. Those are very important things to be able to tell people about, so I love that opportunity to help change the world by helping translate what's going on and coming up with ideas and opportunities for people to be part of it.

Ben (Ideagen):
Kathy, that's fantastic. Kind of going off this idea of inspiration and speaking from your experience, you're not originally a foreign policy expert but you're able to be part of something interesting or you have a place or partnership coming together.

How does your role within the UN Foundation continue to inspire you as you work towards fostering a more peaceful, prosperous and just world?

Kathy:
I get to work with an incredible range of incredible people from meeting Malala to meeting Archbishop Desmond Tutu to Kofi Annan who was the former Secretary General who is now on our board, to Muhammad Yunus who is the founder of the Grameem Bank, to a 9 year-old girl, Katherine Commale who was one of our champion fundraisers for our Nothing But Nets Campaign to Hollywood stars who have put their energy behind making sure girls stay in school. It's so exciting to see people take their passion and be able to do something with it, and that we can help connect them to it.

I've also been really inspired by some business leaders who broadened their vision of impact to include how they are adding to the development space and they're not just saying, "Well, we're doing charity or philanthropy in our communities in a traditional form," but they're really leaning in and using their marketing expertise and their market-building expertise and their employees to make a difference in the world, whether it's through education or water facilities or delivering vaccines. There's so many interesting ways that the business community has gotten involved. Usually when a business leader makes a case for development, it's very inspiring.

George:
That's right, Kathy. I think you hit on something that we're focused with that idea again which is engaging the business community because they're playing such an outside role of impact as well, and so they need to be at the table to provide some of the critical solutions to many of the world's most vexing issues.

On that point, Kathy, what key lessons and vantage points help you to successfully carry out your role?

Kathy:
You called me a tri-sector athlete in the beginning in the intro and I have worked across 3 sectors in government, in business ... well, actually media, and now in the non-profit sector and it's given me an insight as to how each sector operates and how they can better work together to solve global challenges. Sometimes the sectors don't even speak the same language, and I think sometimes we just assume the non-profit world has the market cornered on compassion and the business world has the market cornered on efficiency.

In fact, I see those sectors coming much closer together and I think the future will be hybrids ... organizations that we call the fourth sector, but certainly organizations will care about all those issues and the employees that they'll be attracting, younger people, will certainly hold them accountable for doing that. That's really exciting and I think is a vantage point that we all have to use as we look forward.

Second, I had a mentor once, a former boss from AOL, Steve Case, who always said, "Remember, it's a marathon, not a sprint." That's a really important thing. Over 10 years we have significantly reduced child mortality and changed the future for girls and boys around the world, but it is a marathon and you have to be able to invest and stay with it, bring more people on board and keep working it.

That's a mantra that I use around here all the time to help people focus on the best way to get things done is, first of all, that old adage from Africa ... "If you want to go fast, go alone. If you want to go far, go together." Obviously we all want to go fast and far, but we're learning how to do it together in some new and powerful ways.

Third, I think it's been fascinating to watch the UN change from an institution that only considered it's genuine partner to be member states of the government. We're now seeing that the civil society and the private sectors are equally important partners that deserve a place at the table and can be relied on to help really deliver what needs to be done.

For more information on Ideagen and the UN Foundation, visit: