It's impossible for me to write about the Aspen Ideas Festival, a festival spanning seven days presented by The Aspen Institute and The Atlantic, featuring scientists, writers, artists, mathematicians and leaders from all over the world, without mentioning Walter Paepcke. Believe me, I've tried. Three drafts of previous attempts are in the trash bin next to my desk. Part of my reluctance in talking about Walter Paepcke is because he is my grandfather, but that is also why it is impossible for me not to mention him. And for the record, Paepcke is pronounced, Pepka, not Pepkey. People have corrected me over the years, "Oh you must mean Pepkey," they will say. And while I often think to myself, he was my grandfather, don't you think I know how to pronounce his name? I was brought up to be polite, so I usually say nothing. But let the record reflect, it's pronounced Pepka.

A brief, I promise, history -- Walter Paepcke, president of the Container Corporation of America, came to the all but forgotten town of Aspen in 1945. Inspired by its beauty he began to formulate the Aspen Idea. "The Aspen idea is the cross-fertilization of men's minds," Walter Paepcke said in 1957. Like all good ideas, his was a vision of an ideal. He thought Aspen the perfect place to host a celebration of Goethe. In 1949 the Goethe Bicentennial Convocation brought a couple thousand people to Aspen during post World War II when antisemitism and anti-German sentiments were high. Deeply influenced by the Bauhaus movement, Walter Paepcke invited artists, musicians, writers and poets from all over the world to speak and attend, including Albert Schweitzer on his first and only trip to the United States, where he was quoted as saying in French during a press conference, "You are so nice to me! You treat me like a big banker or a prizefighter." 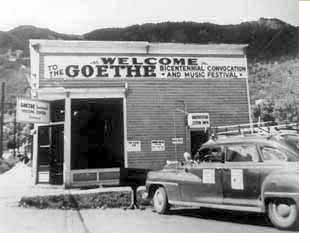 In 1950 Walter Paepcke, with Mortimer Adler and Robert Hutchins created The Aspen Institute for Humanistic Studies. "Issues change from day to day, but your values remain constant," he was known to have said. My mother, Paula Zurcher, told me my Grandfather once complained, "Whenever I go to a party and there is even just one who is in the cardboard box making business, he will come up to me and that's all he wants to talk about. And if there is one really boring topic in the world, it's cardboard boxes." Walter Paepcke believed businessmen would greet an opportunity to study the classics in a physically beautiful setting, while discussing values in leadership and in business, with enthusiasm. It turns out, he was right.

"The Aspen Ideas Festival is the single best thing that the Institute has done since my father died in 1960," my mother told me. "I'm just sorry it's so popular I can no longer attend because I'm too infirm."

Kitty Boone, the program director, has worked tirelessly to bring together a fantastic lineup of presenters, moderators and speakers for the festival, which runs from June 27 - July 3. This year's festival includes, "Cracking the Genetic Code," "What We Believe and Why: An Exploration of Values," "Arts and Culture: Art Matters," "Jobs and Economy," "World Affairs: Democracy on Trial," and "War & Peace in the Modern World."

There are so many sessions it is physically impossible to go to everything. But of the dozens of sessions I have attended so far, there were a couple that particularly resonated. The first was, Our Moral Imagination with the inspirational Jane Shaw British Anglican priest, scholar and Dean of Grace Cathedral, introduced by the multi-talented Anna Deavere Smith. "How are we motivated to think about what it's like to be another person?" Jane asked early in her talk. Her question made me think about my daughter, Emma who is 10 and autistic. I reflected on my journey from trying desperately to find something that would change Emma's brain to responding to the little girl who was right in front of me.

As Jane Shaw spoke about empathy, "a deep responsiveness to that which is different from us," I thought of my Autistic friend, Ib, whose empathy and compassion are a model all humans would do well to emulate. Jane talked about how art and poetry are doorways into another's soul and I thought of Amy Sequenzia's powerful poem, Happy To Be Myself. Amy Sequenzia is a nonverbal Autistic who communicates by typing.

At the urging of an Autistic friend, who wanted to better understand why neurotypicals lie, I went to "NPR On Stage Presents 'A Fish Tale: Is Lying Okay?'" with Jon Hamilton, Alix Speigel and Shankar Vedantam. They showed an animated film about two brothers who lie about catching salmon. During the Q&A Jon Hamilton, who covers neurology for NPR said, "There is one group who have a difficult time lying. People with autism, they have a terrible time lying." It was the only time I heard the word "autism" uttered during the entire first half of the festival. But even so, I was grateful that it was spoken, if only once. Perhaps it will be a topic covered in one of the sessions next year. I hope so.

Louie Psihoyos, who directed the amazing Academy Award winning documentary, The Cove and is working on a, yet to be titled, documentary about "an unlikely team of activists who come together to solve humanities biggest problem...," said during the festival's opening, "A few thoughtful people can change the world."

My grandfather was one of those people. Through tremendous fortitude, determination and hard work he took an idea and changed countless lives, not to mention the fate of one small mountain town called Aspen.

"There are two ways you can make an impact on people," Walter Paepcke said. "Either give them a million dollars or spit in their faces. I can't give them a million, and I don't want to spit in anyone's face. But I can interest them, and that is what I'm trying to do..." The Aspen Ideas Festival, by bringing together such an illustrious group of people is making an impact and in doing so embodies Walter Paepcke's original Aspen Idea. 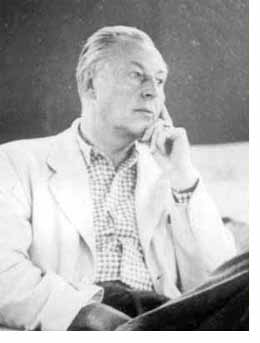 To read about my daughter and Walter Paepcke's great granddaughter, Emma, and her journey through a childhood of autism, click 'here'