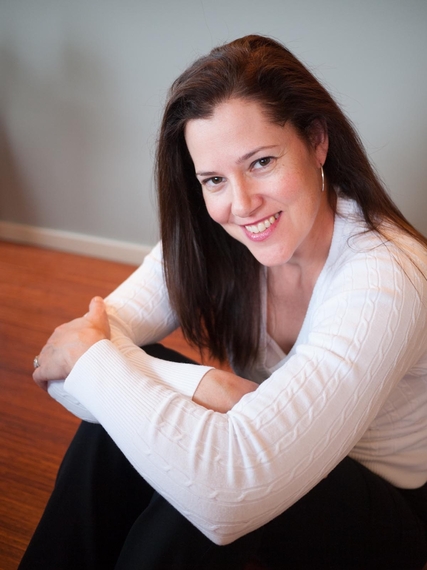 Ingrid's just-released novel, Identity, involves thorny legal and psychological issues raised by a single mother, Renata Sanchez, who was impregnated by artificial insemination. Though she signed an agreement to keep the donor's identity secret, she is convinced that making her child's father part of her child's life is best for her daughter. Fina's task is to uncover the identity of the sperm donor. Complications ensue--the biggest being the donor-father is murdered only hours after his identity is made public. The case turns into a homicide investigation and Fina must find out not only who murdered the father, but why he was killed.

Identity is a classic whodunit. After working as an education and entertainment writer, what made you become interested in writing mysteries?
I love to read mysteries. I was always interested in writing fiction, but when you're 22 years old, it's difficult to decide you're going to have a career as a novelist. I pursued writing in other areas, but always wanted to write fiction. I'm a strong believer in writing what you want to read, and I love mysteries and thrillers. So, that led me down this path.

You entered the certificate program in Private Investigation at the University of Washington. Tell us what you learned and why it's important for your writing.
I wrote an amateur sleuth series before, and it didn't sell. I decided to go in a different direction: I would have a professional investigator as my protagonist. The amateur investigator was quite limiting. I call it the "Cabot Cove Syndrome" because it reminded me of Jessica Fletcher from Murder She Wrote, where a new body is discovered in a small town every week. It didn't make much sense given the town's population. I decided to have a big city, professional investigator in my series.

I entered a program at the University of Washington to learn about investigation. It was a terrific program taught by a defense attorney, a civil investigator, and a criminal investigator. It gave me a solid background in the investigation process. It also provided an opportunity for me to decide which rules Fina Ludlow would break in the novels. It was a great experience because we had expert guests in accident reconstruction, computer crime, a lab technician, and other people involved in crime investigations. For me, one of the great things about being a writer is having the opportunity to investigate areas you would never otherwise know anything about. I recently attended a presentation at a gun range. I've been to the county morgue, and have talked with detectives in the Seattle Police Department. It's been great fun and helps me bring authenticity to my writing.

Referring to your first Fina Ludlow novel, Loyalty, Entertainment Weekly said, "Kinsey Milhone, you've got competition." Do you intend to keep this series going?
I plan to for the time being. I'm daunted when I hear that Robert Parker wrote 73 Spenser books. I can't imagine being able to come up with so many stories and keep it fresh. But for the time being, I'll certainly keep going with it. I love the character and feel there's the chance to keep her growing and evolving. The moment I get bored is when the readers will get bored.

Have you encountered any difficulties writing a series?
Writing Identity was interesting because I had to keep in mind readers who had read Loyalty, and those who had not. It's a tricky balancing act because you don't want to bore people who've been on board from the beginning, but you don't want new readers to feel clueless. That was challenging and it was great to have a group of readers to call on--along with my editor--to give me feedback. I also had to make sure that Fina wasn't getting stale or static and that she made some changes.

Identity deals with artificial insemination (AI) and personal identity, issues which have risen to the fore of late. There was even a movie, "The Kids Are All Right." Any thoughts about that?
What first caught my attention about the issue of AI was an article about some men who, through AI, had fathered scores of kids. It struck me as mind-boggling because it could create many family issues. Other countries have limited the number of children men can father through AI. America hasn't set those limits.

I like issues that are porous, meaning there are many different areas to explore. I thought the concept of artificial insemination fit in nicely at a time when we're all discussing the nature of the family unit. There's room for different opinions and debate. I want clarity to prevail in my own life, but not in my books. (Laughter). Gray zones are good in novels. We're now coming upon a generation of young people who were fathered through AI, and they're starting to decide what they want to know about their lineage.

Identity has plenty of crackling dialogue. Your first Fina Ludlow novel, Loyalty, was recently optioned by a Hollywood studio for a television series. Did you have a film in mind when you wrote either novel?
No, that wasn't on my mind. I love movies and watch a good deal of TV. I wanted simply to create a good experience for readers. I know when a novel is optioned, it can become unrecognizable if it's made into a movie. So, it doesn't make any sense to write something with the notion that it could become a movie or television show. It's not going to end up looking anything like what you created.

Which actor do you see playing Fina?
I can't say because I think it's really great that each reader comes up with an idea of the character. If it becomes a television show, the creative team will have its own idea. But, I think it's great for the reader to be given a certain amount of information by the author; then it's the reader's role to experience and take ownership of the character. I don't want to impose my idea on others. I'd rather they come up with their own conceptions of Fina. There's nothing as fertile as a reader's imagination and I don't want to step on that.

Which writers were your earliest influences?
I come from a family of readers. We were read to and read a great deal on our own. I loved the Nancy Drew series. Part of what was so exciting was finishing one and going to the bookstore or library to get the next one. I loved The Phantom Tollbooth as a child. As an early teen, I enjoyed school reading. I recall reading Shakespeare, Edith Wharton. I loved Ethan Frome but I also remember reading and enjoying Danielle Steel. Growing up in a book-loving household left me with pretty eclectic tastes.

What's next for Ingrid Thoft?
I'm just about ready to send the manuscript for book three in the Fina Ludlow mystery series to my editor. I think a long nap is next. (Laughter). After that, I'll try finding something new. I'll read the paper and watch news stories to see if anything really catches my eye.

Congratulations on writing Identity, the second in what is sure to be a very popular series about a young woman investigator who's not afraid to get her hands dirty.