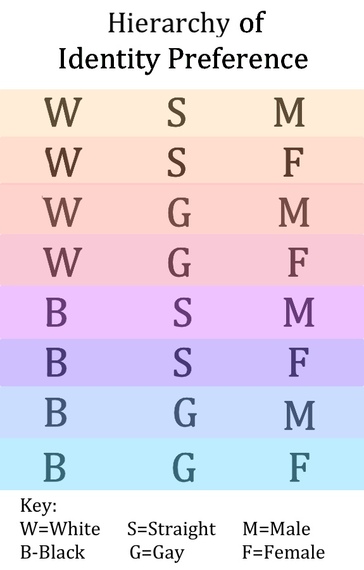 Back in the 80s, starving writers like me could get invited to some very chic Manhattan dinner parties if they had a reputation for keeping the conversation witty and stimulating. So one such night, around the time a third bottle of wine was being poured, I came up with a game. I asked the guests to take three of the principle traits that applied to them - race, sexual orientation, and gender- and come up with the order they would let go of each characteristic if they had to replace it with another.

This took some explaining, so I used myself as an example. "So I'm a white gay male. Let's say tomorrow morning I had to wake up either straight, black, or a woman. Which would I choose first?" So, changing one trait, my options would be: white straight male, black gay male, and white gay female. But the list got longer if I changed two traits, e.g. I could also be: white straight female, black gay female, and black straight male. If all my traits were flipped, I would be a black straight woman. All told, everyone had seven options they could list in descending order of preference, (as visualized in the graphic above.) The idea was to determine in which configurations you would feel most like your current self, and in which, the least. Harmless entertainment, right?

My "harmless" query turned out to push a lot of buttons, and I didn't propose it at any other parties. In fact, I'd almost forgotten it when, a decade later, O.J. Simpson went on trial for murder.

Living in L.A. during the Rodney King riots, I understood well enough the jaundiced eye with which the black community viewed the criminal justice system. But when even residents of a battered women's shelter cheered O.J.'s innocent verdict, I realized that my game had accidentally hit upon an interesting truth. Identity was constructed in layers, not labels. The reaction of these abused women illustrated how the layer of being black determined their experience in the world more than the layer of being a woman.

Fast forward to ten years later. After a vertiginous descent into meth addiction and drug dealing, I spent nine months in prison. There, the highly segregated races did manage to agree on one thing: disgust was the only acceptable reaction to homosexuality. After a rocky start, thank God I also discovered that my fellow inmates' craving for caffeine trumped even their fear of catching my sexual preference. By doubling my monthly order of coffee and doling it out generously, my bunk actually ended up becoming a popular place to hang out. And during one of my little "salons," the sociologist in me could not resist trotting out my old thought experiment.

Choosing from my hypothetical list, staying white was the highest priority of all of the white inmates, even if it meant having to swap genders or sexual preference. Some, titillated by the idea of girl-on-girl sex, preferred the idea of being a white lesbian to being a white straight woman, but most chose being a white gay man above that. (A few insisted they would still screw around with women "on the side," thinking themselves quite sly in sidestepping the premise.) But none felt that staying a straight man would be worth it if it meant experiencing life with a black skin. Being white was not only central to their identity, but absolutely essential to their self-esteem. It was the one thing they could point to in a largely failed life that made them feel superior to someone else.

It took me a while to survey some black inmates, as both camps generally shunned any substantive interaction across racial lines. Somehow though, my gayness served as a kind of visa to the other side of the racial divide. The black inmates could see that I had been initially shunned by the other whites, and that gave me some credibility when it came to understanding marginalization. The whites didn't want to jeopardize their free coffee, so as long as I was discreet, I could ask my questions.

After about a month or so, I had enough responses to reveal an overwhelming pattern. The first choices of all the black inmates had one thing in common; a willingness to change race. Ironically, this made their answers almost identical to those of the white inmates. As one black prisoner told me: "Waking up white? Shit. Sounds like a vacation to me."

I got this kind of comment several times, and followed it up with more questions. It's not that anyone actively wanted to be white, I found out, or felt bad about being black. It just seemed to them that if they could be white, it would make for a much less stressful existence. Leon, who occupied the bunk to my right, and had an unerring knack for the casually profound remark, put it this way:
"It would be nice to just walk down the street and not be noticed."

His words came back to me a few years later, when I sought to find examples of white privilege for those who had no idea they even had it. It was the right to be anonymous, for one. To walk down the street without being noticed.

One thing you could say about the "Aryans" I met in prison is that they were pretty honest about their racism. Like the white supremacists at a Trump rally, such people make it easy enough for the rest us to sincerely utter those self-soothing words: "I'm not a racist." But actually, we are.

Kindler, gentler racists, perhaps, but if you're raised in America, it's simply impossible not to have unconsciously adopted the biases of the racist society you grew up in. And even though there is no term like "internalized blackophobia," being the target of racism from without hardly protects a person of color from experiencing it within.

That's where my questions, or rather the answers to them, can be used as a diagnostic tool- not just around questions of race, but gender and sexual orientation as well. When you ask yourself who you'd most likely trade places with, you also discover who you'd least likely trade places with. How much your choices conform to the differentials of power and status in the country is useful information to have, even if it might be a little uncomfortable to find out.

Note:
W, S, and M are at the top of the chart because "white," "straight" and "male" are the most advantaged categories in America. B, G, and F are at the bottom only because "black," "gay," and "female" are their inverse categories. I certainly am not suggesting straight white men are in any way superior to African-American lesbians - a few of whom I know and would kick my ass if they thought that's what I believed.
There is no category for Latinos or Asians of Immigrants or trans people because more gradations would make the exercise unwieldy in the extreme. (At least that's what my swarthy Mexican husband told me to say.)