If Washington is Hollywood for ugly people, why not just pretty up that side of the American discourse, too? After all, if we're going to have to watch bravado-filled speeches and dishonest cable news interviews, why not have some eye candy, too?

Using imagery from the 2008 election, in which Barack Obama raised, however briefly, the spirits and hopes of a nation, this George Clooney joint -- it was adapted into screenplay, directed by and starring the already-outspoken star and advocate -- explores the juxtaposing constants of public inspiration and private flaws in politics.

Clooney stars as a Presidential candidate with seemingly all the momentum, and Ryan Gosling his "up-and-coming" press secretary who, per the official synopsis, "finds himself involved in a political scandal that threatens to upend his candidate's shot at the presidency."

Speaking to USA Today, Clooney said that he had to wait a few years to produce the film, waiting for inevitable cynicism to creep back in after the elation following President Obama's election. The noted liberal made it about Democrats to, in part, avoid accusations of bias, though it doesn't quite stick to party lines.

"Of course it's political; it takes place during a primary," he told the paper. "But it's more about process than platform."

He also noted that, 'Republicans hate the beginning of the movie, the Democrats hate the end. So we're good."

The film, which co-stars Philip Seymour Hoffman, Marisa Tomei and Evan Rachel Wood, is set to open the Venice Film Festival on August 31st; for more, click over to USA Today.

Clooney also stars in upcoming dramedy, "The Descendants," which will play at the Toronto Film Festival, while Gosling's "Drive" will also take the screen in Canada in September. Gosling can be seen this weekend in much lighter fare, the romantic comedy, "Crazy, Stupid, Love." 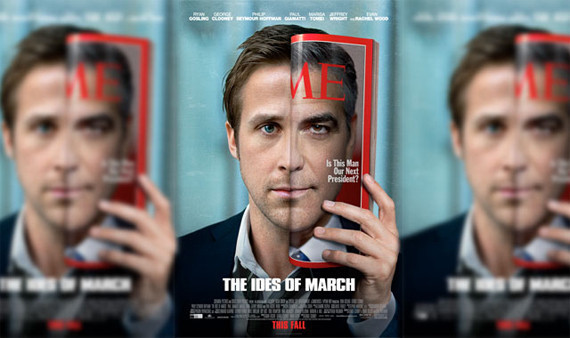