The 2012 Iditarod Trail Sled Dog Race kicks off this weekend, sending 66 dog-powered sleds on a two-week, 1,100-mile slog across Alaska. Dubbed "the Last Great Race on Earth," it's one of the longest, toughest and most popular sled dog races anywhere.

Thanks to those same superlatives, though, it's also one of the most controversial.

Animal advocates have long claimed the Iditarod is too extreme, citing its history of dog deaths -- 142 since 1973, according to the Sled Dog Action Coalition, including 20 since 2005 -- and reports of abuse. Those issues still hound the race in its 40th year, even as supporters point to safety measures such as microchips, drug tests, health screenings and mid-race checkups, plus the dogs' training and genes.

"Anyone who has ever witnessed a sled dog race can attest to the enthusiasm that sled dogs demonstrate for their sport," chief Iditarod veterinarian Stuart Nelson wrote in 2010. "Running is what they are born to love." (Nelson and other Iditarod officials didn't respond to MNN's questions for this story, but spokeswoman Erin McLarnon explained that it's because they're too busy with pre-race duties.)

Sled dogs certainly are bred and raised to run, and they often do seem thrilled to oblige (as in this photo). But separating any dog's love of work from its loyalty to humans isn't easy. And since racing is the only life many sled dogs know, some animal advocates say they can't be considered truly willing participants.

"We know dogs like to have fun and run, but this is a completely different scenario," says David Byer, senior corporate liaison for PETA. "They're running for hours a day in brutal temperatures. No animal is going to enjoy pneumonia or hypothermia. This is not something that is good for the dogs, no matter how they are bred."

But while PETA opposes mushing in general -- not a popular stance in Alaska, where the sport dates back centuries -- many animal-rights groups are less absolute. The Sled Dog Action Coaltion supports recreational mushing, for example, and the Humane Society of the United States is neutral, aside from concerns about the Iditarod.

"The HSUS does not oppose the use of dogs in sledding," the group says in a statement, "but has concerns about recent dog deaths in the Iditarod, and urges the organizers to reach for a higher animal care standard." Iditarod officials already boast of a high care standard, including pre-race evaluations, blood testing, ECG recordings and mid-race health exams. "The [Iditarod Trail Committee] has made some reforms," the HSUS acknowledges, "such as reducing the maximum size of dog teams from 20 to 16, in order to allow the mushers to keep better tabs on the animals."

Nonetheless, it adds, "race organizers continue to mass-market the race and hype the competition among mushers who are continually attempting to break speed records. Race times are declining, and that is putting more dogs at risk."

How much are race times declining? Here's a graph of the winning time for every Iditarod, based on archived data from the Iditarod Trail Committee: 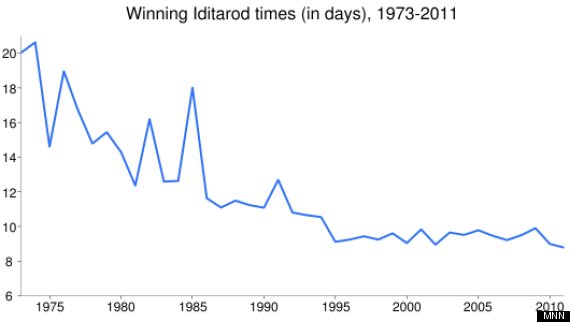 Of course, faster race times don't necessarily mean more danger. At least one dog has died in most Iditarods, with an average of about three per year, and six died in 2009. But then no dogs died in 2010 or 2011, despite some of the fastest times in race history (including a new record). Nelson, the chief veterinarian, has credited a new focus on treating gastric ulcers, one of the top ailments of Iditarod dogs.

Some critics remain skeptical, though, arguing deaths are inevitable given the race's length and pace. "They're running a massive distance, and they're doing it with little rest because they're all trying to win," Byer says. The Iditarod's 1,100-mile course officially honors sled dogs in the famous 1925 serum delivery from Anchorage to Nome, but the SDAC points out some key differences: "In the serum delivery, a train carried the medication from Anchorage to Nenana. From there the dogs ran the remaining 674 miles in relays. ... There were 20 serum mushers with dog teams, and no dog ran over 92 miles." Top Iditarod dogs now cover about 125 miles daily.

So what is an appropriate pace and distance for sled dogs? The answer likely varies, but it's worth noting that dogs were distance runners long before people came along. All dogs are technically still gray wolves -- a species known for extensive roaming in the wild. Domestication has brought major changes (try getting wolves to pull your sled), but did wolf evolution still help prepare dogs for the Iditarod?

Sort of, says University of Wisconsin-Madison wolf researcher Adrian Treves. Wolves can cover lots of ground when they're hunting or roaming -- Treves co-authored a 2009 study on wolf dispersal patterns around the Great Lakes, which included several accounts of wolves roaming hundreds of miles in relatively short periods. One young male traipsed 428 miles during a five-month span in 2003.

"Canids (the dog family) in general are adapted to coursing pursuit of prey (long-distance running)," Treves writes in an email to MNN, explaining that this distinguishes them from cats, "who stalk and sprint short distances to take prey." L. David Mech, an internationally renowned wolf expert from Minnesota, adds that wild wolves average about four to 28 miles daily, and can travel up to 46 miles in a day if needed.

Still, Treves says races like the Iditarod are different. "The Iditarod and other races are relentless long-distance races with few breaks for the dogs, compared to long-distance dispersal," he writes. "[Dispersal] is meandering and includes frequent breaks, because it is not goal-directed but a process of searching, we believe."

Aside from conditions in the Iditarod, a parallel debate focuses on "behind the scenes" cruelty -- namely alleged abuse and culling of dogs. "Thousands of dogs are bred for this, but not every dog is a fast runner," Byer says. "Those that can't measure up are often killed." There have been sporadic reports of abuse in recent years, both in the Iditarod and at kennels. Musher Ramy Brooks was penalized after the 2007 race for striking his dogs, for example, while two other Iditarod mushers -- John T. Hessert and Doug Bartko -- were found guilty in 2008 of animal mistreatment at their kennels.

Iditarod supporters say such instances are rare, pointing to improvements in race monitoring and kennel standards. But even though it wasn't tied to the Iditarod, a notorious 2010 culling case in British Columbia has revived calls for stricter animal protections in the U.S. as well as Canada. Alaska has relatively vague animal-welfare laws compared with other states, which groups like SDAC and PETA say has allowed cruel practices to persist there. But in the wake of Canada's culling case, a new task force in Alaksa is developing standards to toughen the existing law.

One member of that task force is Maureen O'Nell, director of the Alaska Society for the Prevention of Cruelty to Animals. Calling it a "golden opportunity," she says the panel "needs to pull from other state laws to gain from the experience, successes and failures of other groups." The Alaska SPCA doesn't oppose the Iditarod, she writes in an email to MNN, but it does want the state to take better care of all its animals — including sled dogs. "It is time for Alaska to create standards of care for animals," she says. "Standards of care define the basics of the condition in which animals can/should be cared for. This is just the foundation of creating animal-protection rules."