Connie Barlow, my science writer wife, and I have been traveling North America for 11 years as evangelists for big history and religious naturalism. We have addressed more than 1,700 religious and non-religious groups -- ranging from Catholic, Protestant and evangelical Christian churches, to New Thought, New Age and Eastern spirituality groups, to Unitarian Universalists and secular high school, college and university students. Our passion, our calling, is to show how a fully evidence-based view of human nature, death and the trajectory of big history can inspire us to cooperate across political and religious differences in service of a just and thriving future for all.

Our commitment to proclaiming the wonders and practical benefits of a deep-time perspective has never wavered, even as the core elements of our message have continued to evolve. Currently, I'm on a crusade to counter our culture's rampant idolatry of the written word. In practice, this means that, like the New Atheists, I am prone to point out the scriptural injunctions in my own tradition that modern sensibilities rightly recognize as morally repugnant.

For example, even the most conservative of Christians alive today do not respond to our disrespectful sons by inviting neighbors to join in stoning them to death. Nor do we advocate capital punishment for the sin of working on the sabbath. No western voice rises in support of ancient Middle Eastern customs of slicing off the hand of a thief or beheading blasphemers. In spite of scriptural admonitions, we apply modern moral reasoning -- secular reasoning -- that has emerged through the centuries as cultural conditions themselves evolve.

Biblical literalists who pick and choose which passages to preach and which to studiously ignore are thus faced with a nagging inconsistency. The way forward, I suggest, for all Christians -- liberals as well as moderates and conservatives -- is to join this crusade against idolatry of the written word as we embark together on the cross-cultural enterprise of interpreting our evolving world as best we know it today.

To begin, let us appreciate why this stubborn idolatry of the written word not only happened but was inevitable in our human journey. Here I shall quote from p. 27 of my book, "Thank God for Evolution":

Imagine early humans fanning out of Africa in waves, driven perhaps by climate change, resource scarcity, overpopulation, and certainly by our inborn spirit of adventure. The only acquired knowledge or memories of the ancestral home and lifeways that would carry through the generations would be those embedded in songs, ceremonies, and orally transmitted stories. Tens of thousands of years pass. People now inhabit all continents except Antarctica. Some have settled into fertile valleys and have domesticated favored plants and animals. Villages form. Knowledge is still transmitted orally. Then a threshold is crossed. Early forms of writing are used to record debts and other important information. Chiefdoms, kingdoms, and other large-scale organizations of cooperation and social complexity appear, like mushrooms after rain. Finally, we witness the whir of cultural change encompassed in the last several thousand years: city-states, theocracies, and political and religious empires. The importance of writing has escalated; now even religious wisdom is preserved and passed on as scripture.

Now imagine one of your own ancestors, from not so many generations back, who owned no books, had no access to libraries and who was never taught to read. Imagine your ancestor living in a village or tribal setting in which nobody else could read, either. Then imagine a stranger appearing -- a stranger who arrived with a scroll of vellum or parchment from which word-for-word perfectly recited stories would unfold -- and out of simple and seemingly senseless traces of ink. Surely this was a miracle! The magical parchment would from then on be perceived as a far more potent object of veneration than, say, a mute sculpture of a golden calf.

All of us alive today hail from ancestors lucky enough to have been born into cultures that thrived long enough for those ancestors to reproduce. Their cultures thrived, in part, by faithfully passing along information via stories -- from one generation to the next -- that contributed to both personal wellbeing and social cohesion. These were stories that motivated our ancestors to carry on with a hopeful heart through any discomfort or setback. These were stories, too, that encouraged cooperation and trust among neighbors and sometimes even strangers, so long as their sacred stories and the rites that rose out of them were pretty much the same as one's own.

From an evolutionary standpoint, those cultural stories imbued our ancestors with fitness. Thanks to the stories, our ancestors knew how to live successfully with the resources and limitations of their particular bioregions. They knew with whom to cooperate. Thus our ancestral tribespeople and villagers were nurtured to care, indeed sacrifice, for the well-being of their people such that invaders were held at bay -- or such that they themselves could launch successful raids and invasions.

As conditions changed, so would the stories. Invention or acquisition of new technologies or domesticates would nudge the stories to shift. So would climate change, environmental degradation, geological catastrophes, migration into new landscapes, enslavement or any other significant shift in external conditions.

Orally transmitted stories would thus evolve over time as conditions changed and as generations faced new challenges. Century upon century, the stories would freely transform -- that is, until stopped in their tracks, until engraved in stone and declared the unchanging revelation of God. 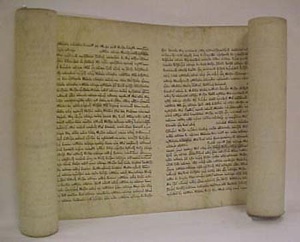 Alas, when a story becomes Scripture, it ceases to evolve -- at least in any functional, intentional way. Skillful and charismatic interpreters of unchanging Scripture can, of course, maintain the relevance of the sacred stories for a good deal longer by continuing to evolve the interpretations. Supposed miracles can be reinterpreted as metaphor; historical "fact" can be recast as value-laden parable. But when the interpretations themselves fall to the temptation of idolatry of the written word, absurdity eventually prevails.

Ultimately, the temptation of converting fluid stories and interpretations of stories into dead-end Scripture and creed makes it nearly impossible for God (reality mythically personified) to continue to offer the kinds of functional modifications that our ancestors consistently sensed and assimilated. Thus, we moderns may find ourselves in church on a Sunday morning listening to a minister who preaches in full accordance with modern evolutionary sciences, yet whose sermon is immediately followed by liturgical recitation of an ancient statement of fantastical belief.

This happens to me quite frequently. Not long ago I delivered a guest sermon in an Episcopal church, preaching "The Gospel According to Science: Evolutionary Good News," as I sometimes call my message. Following the sermon I returned to my seat behind the altar, then rose with the congregation to solemnly profess in unison belief in a series of alleged miracles, as printed in the order of service. The Nicene Creed was adopted centuries ago by Christian leaders who had no inkling of the continent of my birth and who were quite certain that the starry heavens ceaselessly travelled around the focal point of this Earth. The church officials who gathered in A.D. 325 on the peninsula that divided the waters of the Black Sea from those of the Mediterranean would adopt a set of words that long would be used to distinguish the faithful from the faithless, the beloved flock from those destined for flames or conquest. I knew, too, that this creed had been used as justification for countless instances of abuse and terror, torture and execution. Yet here we gentle people stood on this lovely morning, reciting words once responsible for so much suffering, words which, thankfully, few of us take seriously any longer.

Richard Dawkins, Sam Harris, PZ Myers, Jerry Coyne, the late Christopher Hitchens, and other so-called New Atheists have not hesitated to point out the absurdity of this situation -- indeed, the hypocrisy of it. In our heart of hearts we know, too, that there is something deeply misguided about pummeling our youth on Sunday mornings with ancient stories about mustard seeds and Sadducees while ignoring their own fascinations with topics and peoples the biblical writers could not have fathomed: supernovas and Ardipithecus, space flight and polar ice.

It is true, of course, that our modern understanding of the cosmos and human evolution, as well as our profound abilities to manipulate (for good or ill) climate and ecologies, would be impossible without the written word. Progressive scientific knowledge and technological achievements absolutely depend not only on the written word but also on systems for dispersing, storing, sorting and ultimately retrieving the written word. Moses had no access to Google search engines, nor its immediate predecessor: Science Citation Index.

Yet there is a foundational difference between religious Scripture and the sprawling scientific archive. Only the latter is encouraged to expand and evolve. Indeed, although each new generation of scientists continues to value the contributions of past "prophets" (e.g. Galileo, Newton, Einstein) no less than religionists value their own prophets, only scientists recognize that the highest form of reverence is to stand on the shoulders of their mentors -- not prostrate before them.

Thus my call: Those of us who wish to continue calling ourselves Christian must no longer enslave mind and heart to inert fossils of ancient texts and creeds. As Jesus himself is reputed to have said, "and greater works than these shall you do" -- but only if, following the admonitions of Moses, we guard against all idolatries, including today's rampant idolatry of the written word.

The New Atheists thus are doing us all a service by jesting and poking fun at the ridiculous and scandalously immoral passages and stories that still lurk in so-called Scriptures of the Abrahamic traditions. Let us rise to the challenge. Let us unshackle our religious stories and texts, and welcome evolutionary growth within our religious traditions. Let our hope and trust in the future be fed by a new story of 13.8 billion years of grace, a story in which time and again new opportunity emerged from the ruins of catastrophe. Let our gratitude encompass the gifts of ancestral stars in which God/Reality/Nature forged all the complex atoms that comprise our bodies. Let us find a new salvation in the prospects for fulfilled and honorable lives in this world. Let us nurture compassion for self and others by learning the story of our evolved minds. Let us evolve a faith grounded in God/Reality/Nature as we know It/Him/Her today, a faith that can weather any storm.

And let us elevate our children and youth with stories that excite them, that build faith and trust, evoke gratitude and compassion, and provide guidance relevant to today's challenges and choices. Let us yoke together, as religions have always attempted to do, all the knowledge of today's world, all the histories that have brought humanity to this moment. Thus, let us bring new words into our liturgical gatherings -- words like, supernova and stardust, Tyrannosaurus and Tiktaalik, evolutionary psychology and bioregional ecology.

Let us grow up together!