Back in April, Meet The Movie Press reported through agency sources that Warner Brothers is currently casting for a Green Lantern film in 2020. Though unconfirmed by the production company, it's exciting news for fans and nerds like me who would love to see the iconic character come to life on the big screen. And for me, the casting choice is obvious: John Stewart, the Black Green Lantern, should be played by Idris Elba.

Elba hinted his interest in playing John Stewart in 2013 when he responded to a fan-fiction Twit-pic of him in the Green Lantern suit. We don't know the details of his contract with Marvel, but who knows what could happen in five years. 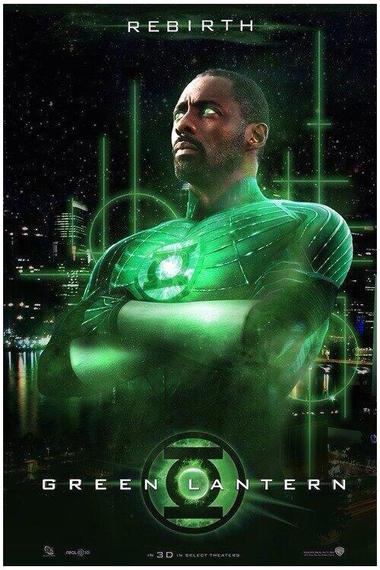 Though Elba is a fan-favorite, there are other names attached to the Stewart character. Grammy award winning artist Common was rumored to play him in Justice League: Mortal, but the movie was shelved. R&B singer and actor Tyrese is campaigning to play Stewart and may have already met with Warner Brothers about the role.

With all due respect to Common and Tyrese, I don't think they are the best fit. Tyrese is frequently comic relief in the recent notable movie he's played in, such as Four Brothers, Transformers and Fast & Furious series, etc. Audiences may not take him seriously as super-hero of Stewart's magnitude. Common possibly could channel some of his LUV performance into Stewart, but he may be too smooth and laidback to play a man with the weight of the universe on his shoulders.

The actress/actor and the part need chemistry. This idea applies exponentially when to super-heroes, because directors are working to connect to fans' strong, nostalgic conceptions of who "should" play their favorite characters. It isn't only about star-power, one reason why the Green Lantern movie, starring Ryan Reynold's as Hal Jordan, flopped.

Another reason the film didn't work the first go around was because Hal Jordan's character was unfamiliar to many of the film's target audience members. Stewart was one of the most popular characters in DC's Justice League cartoons. For and a whole generation of millenials, John Stewart is the only Green Lantern we know. Yes, casting Elba in a genre dominated by white males is a progressive move, but the choice to use the Stewart character over the many other Green Lanterns is a legitimate connection to popular nostalgia, something comic-book adaptation film make billions off of. Though the issue of race is there, the bigger reason is that it just makes sense - and cents.

Some concerns about Elba playing Stewart is he's "too old" (even though Stewart's character in the JLU cartoon was a middle-aged man, and later appeared with grey-hair). But this isn't a big issue, since the directorial vision would probably be crafted around him and his age. Plus, we've seen older actors rock their super-hero roles. Christian Bale owned Batman and most of us can't imagine an Ironman other than Robert Downey, Jr. Age ain't nuthin but a number.

Elba also has the star-power to make the film a box-office success. Hollywood tends to pledge allegiance to A-listers, which is often a huge impediment to character diversity and limits the big roles actors and actresses of color can pursue. The Top 100 most successful science-fiction movies casted a person of color as the lead only eight times (and Will Smith was six of them). Though these statistics are problematic, casting Elba would "sell" the movie to wider audiences while still increasing the diversity in comic-book adaptation films, the film industry's hottest genre. Maybe it has and will take the success of the biggest stars of color for Hollywood to realize diversity doesn't hurt their bottom-line.

It's important for audiences to see three-dimensional characters of color at the center of their own narratives. Super-hero mythology is important facet of pop culture across gender, race, and class lines. Straight white men aren't the only people who can save the world, so the success of an Afro-futuristic hero is metaphor for much more than a sci-fi fantasy narrative. Casting Elba as John Stewart would be a major milestone, since neither Marvel nor DC has made a film with a Black lead character (though Marvel is scheduled to release a Black Panther film in 2017).

But the serious stuff aside, as a fan and a nerd, I think we've had many missed opportunities for perfect match (Though Halle Berry rocked it, I wanted Angela Bassett as "Storm", and we'll probably only see part of #DonaldForSpiderman come to fruition). There has also been a fan push for him to be the next James Bond. I'm sure many would be ecstatic to see him as 007; chasing villains in high speed sports cars, infiltrating enemy headquarters, radiating bad-boy charisma, charming seductresses, and using high technology to save the world.

But I think we could use a different type of hero. Let Idris to play the iconic green cosmic cop. If you can't see it yet, close your eyes and imagine this:

John Stewart (Elba) hovers over Earth from space, suspended in a bright green aura. The instrumental to Big K.R.I.T.'s "Cadillactica" plays in the backdrop, filling endless dark-matter with cosmic synths and planet-shaking bass. The glow of his neon ring reflects in eyes of his intense gaze, as he broods over his task to preserve justice in the galaxy.

"In brightest day, in blackest night, No evil shall escape my sight. Let those who worship evil's might, Beware my power, Green Lantern's light!"

Come on guys, this one is a no-brainer.