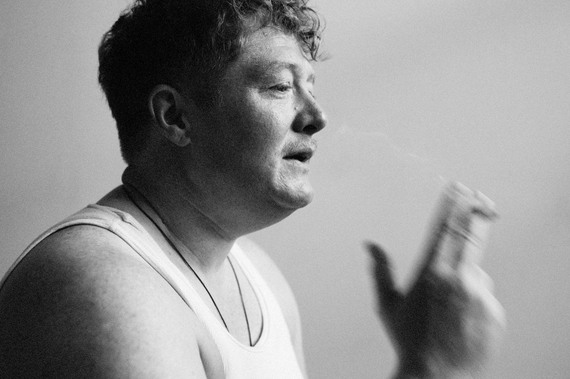 In the wake of a formative year for transgender communities, where there has been much celebration for those who have chosen to transition publicly, there seems to be little discussion about people like Becca Blackwell, a trans actor who post-transition does not conform to the gender binary that our society is comfortable with. Blackwell sat down with me to talk about how the circus saved her life, the nuances of constructing masculinity, and her upcoming solo show based on a Corey Haim PR stunt that confronts the discomfort that comes with using they as a gender pronoun.

It's amazing to see how much trans visibility has recently escalated...
In six months time!

Yeah exactly, it's been happening so fast. Do you think that the recent advances in trans visibility could have a limiting effect on what is produced creatively in these communities?
Yeah definitely, I think anytime you have something really unique and sacred, and then you blow it up, something gets lost in that exposure. Kind of like what Madonna did to voguing. The way she used it didn't exactly empower anyone from the ballroom community that she took it from. And suddenly kids across America are voguing without any clue that this came from a queer community in New York that was creating a safe space for people coming from very unsafe and unaccepting environments. I just think that when that kind of exposure or political advancement happens so quickly, certain histories may be lost or forgotten.


Since you are often cast into male roles, how does that work as for auditions? Do you have to choose a gender when you audition?
I don't even participate in that environment. I use to go to auditions with long hair, and they just did not know what to do with me. And I would be told that I was too unique and that I couldn't blend in. And you know a lot of those kind of roles are all about blending. I actually talk about this in my solo show, after working in bars I picked up this really cute little pastime of getting wasted and doing tons of cocaine.

That's so cute!
I know, right! So I put my acting career on hold and started working with Circus Amok, which is this queer socio-political circus (no animals), its free and travels all over the parks of NYC. They haven't done it in a while, but that circus saved my life. I quit bartending, cut my hair and joined this circus. It was full of incredibly talented weirdos; they were my people. And it was really like a family, we fought, and it was really hard at times, but it was instrumental to saving me spiritually, artistically and emotionally. And it was through that community that I became part of some amazing shows and worked with all these incredible people in the down town world. And from there it was always word of mouth, and I no longer needed to audition because everything came from within our own community. At one point I realized that I was one of the three only trans actors working consistently. And now there are a lot of young trans people coming up which is so awesome to see. But for me, coming up as a trans actor, it was just a glass ceiling that I wasn't always sure how to handle, and my show -- They Themselves and Schmerm -- has a lot to do with this travail.

You mentioned that this comes up in your upcoming solo show, They Themselves and Schmerm, what is the show about?
Well, it's based on this weird PR thing that Corey Haim's handlers did in 1988 called Me, Myself and I. And it was his way of being like, Hey, I don't have this drug problem, look at me play baseball, and I can play hockey, I love fashion, look at me play the keyboard! And it was very fascinating because I just saw someone who was so hurt, who had been abused and had a massive drug problem -- things that I can relate to and identify with. So I used this as my container to make my own thing called They Themselves and Schmerm, within the context of my own industry problems.

I was also working on this web series called the Impossibilities, and they were casting a trans person -- you know, like before six months ago -- and my friend did this thing called Out Takes, so where I am now, I'm very lucky because I just imagine all the people before me that had to come up when this discourse didn't exist. I think Lea DeLaria is one of the first truly butch-bodied people that I've seen on TV, ever! Except for the weird over exaggerated massage lady named Helga! You know? Hey weren't actually butch, they were just big scary German women.

Yeah, your right. I hadn't considered that, but then again as queer people, I guess were always looking at any character or story and putting ourselves in there in whatever way we can relate to it.

Yes, absolutely! At least I can say for you and I, we came of age in a time where we saw nothing but heterosexual story lines that we had to find a way to correlate to or connect to it in some way. Which is what all my friends of color have had to do their whole lives. At least I didn't have to imagine being another skin color. But I guess that can go on and on, like if you're not able bodied, etc.

Things are clearly starting to change, though. Look at HBO and Netflix, by not being beholden to corporate sponsors like they are in cable, people are finally able to push it further and make some really interesting stuff. What's fascinating about that is people my age are now in positions of power, which changes the dynamic. It's not like they're all 60-year-old white men that are like, what? A Dyke! And she's not hot by my standards!? Which is why people like that have always had a problem with people like me, because if I am perceived as a man, then what is the value of a man? If a man with a vagina can be just as strong and masculine as one with a penis, then just watch the patriarchy crumble. That's something thats really hard for people raised with those ideals to come to terms with.

Would you say masculinity is the biggest threat to most men?
Yes, most men, when they meet a lesbian, want to dominate them. And look, you can't dominate me. I bench press over 200, I'm confidant, which really freaks them out, and I'm articulate. I have everything a man has, just not the talking stick -- well actually I do, but they're all lined up in my closet.

But the shackles of masculinity certainly go both ways. I mean, I've known plenty of gay men who also struggle with their own internal hang-ups around masculinity. Has anything like that ever come up for you?
Absolutely, you know, I'm on testosterone, and I haven't had top surgery because I haven't found 10 grand that I can throw down, but then I also ask myself; do I want to be a man? Currently I do all the things that a man does, yet I don't always feel comfortable using the term he, because I'm concerned that it will erase the entire struggle that she brought with me. And there was a long time where I would present as I am in a masculine way, but request that people use she with me. It's like, yeah I look like a dude, but you're going to call me she, because I want you to rethink feminine bodies. Like, I am Martha and I am George. Deal with that.

How does that affect you as an actor? Or does it?
It doesn't affect me, because I do what I want. But I certainly see other femme actresses that just want to shave their heads be really butch because that's how they feel on the inside, but they have to play this game for the sake of their careers, for the sake of the industry. As soon as a woman cuts here hair, she looses her position, not even power, just her position. It's like, Aw, you had such pretty hair -- and well, I thought I had a pretty face too, and this like really cool mind?

Becca Blackwell will be performing They, Themselves and Schmerm at Abrams Art Center from February 25th through the 28th