As a medical professional, what five medications would you try to stock up on if you knew a civil war or zombie apocalypse was heading your way? Why?: originally appeared on Quora: The best answer to any question. Ask a question, get a great answer. Learn from experts and access insider knowledge. You can follow Quora on Twitter, Facebook, and Google+. 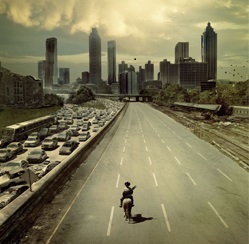 As a primary care physician and a zombie apocalypse story enthusiast, I can't resist chiming in. Of course someone with experience from either war zones or at least third world countries would be better equipped to answer.

The first issue after the apocalypse will surely be sanitation. I will no doubt stock up on gauze and rubbing alcohol -- I hope these will not count toward my five chosen medicinal items. Suture material will also inevitably be needed.

Intravenous fluids would also be high on the list of priorities, but my ability to stock up on them depends on whether I aim to establish a stationary medical care unit or backpack my way through the post-apocalyptic wasteland. Assuming I will not have an actual medical station with sterile working environment, unlimited needles and complex diagnostic tools, I have chosen to stock up only on medications that can be used based on a clinical diagnosis and administered orally.

To this day one of the greatest killers in third world countries, particularly of children, is common diarrhea. It's often treatable with simple rehydration, providing the patient with the necessary fluids and electrolytes. I'm sure everyone in their right mind will be stocking up on clean water, but if you want to avoid electrolyte imbalance, you will need to replace them as well.

Pharmacies sell ready mixed electrolyte powders in small sachets. Not the sexiest item on the shelf, but quite possibly the most likely to save your life in a survival struggle in unsanitary conditions.

In World War I microbes were as great a killer as bullets. In unsanitary conditions even the smallest cut can be fatal after it becomes infected. And I bet small cuts won't be a rare sight among survivors of the desolation.

Moxifloxacine's antibacterial spectrum covers gram-rods (e.g. E. coli) responsible for the more severe forms of gastroenteritis, gram+ cocci (e.g. Strep. pneumoniae) responsible for pneumonia, anaerobes (Clostridium spp.) found in chronic, necrotic wounds and atypical bacteria (e.g. Mycoplasma or Chlamydia) that many antibiotics are ineffective against. Most importantly, it's effective against Staph. aureus; the most common cause of wound infections.

There will undoubtedly be pain in the post-apocalyptic wasteland, be it from zombie bites, raider bullets or common fractures. Oxycodone is as effective as morphine or fentanyl, can be administered orally and has a long-lasting effect, depot tablets up to 12 hours.

Cortisone is an incredibly versatile drug. It can be used for a wide range of autoimmune diseases and skin conditions, but it also has emergency applications in management of acute asthma, hypersensitivity reactions, inflammatory swelling, various poisonings and envenomations. Prednisolone can be administered orally, once daily and used for children and elderly alike, making it my choice of cortisones.

Diazepam may seem like an odd choice, but my vision of post-apocalyptia is not a pretty sight. Poverty, hunger, squalor, rampant illness, constant threat of death, rape, mayhem... I'm pretty sure people will be cracking up sooner or later, having mental breakdowns, suicidal behavior, becoming agitated, aggressive, dangerous to themselves and others around them. Now, I'm a strong proponent of therapy, but just in case the apocalypse doesn't spare the mental health organizations, I'm going to need a way to calm people down.
Diazepam can be administered orally and has a very long-lasting effect, making it the ideal benzodiazepine for a post-apocalyptic doctor's bag. Oh, and it's also great for epileptic seizures, alcohol withdrawal and muscle relaxation when setting fractured bones.

My list is very much focused on management of immediate threats. The limited number of medicines left no room for preventive medicine like blood pressure medication or even insulin. Granted a type I diabetic will soon die without insulin, but in the kind of dog-eat-dog apocalypse I'm envisioning the needs of the many will outweigh the needs of the few and a diabetic would require a sustained source of insulin to survive.

I also left out many emergency medicines that might save the lives of few, like aspirin, nitroglycerin, asthma inhalers, adrenalin etc. because again I question my ability to provide sustained care after the immediate crisis.