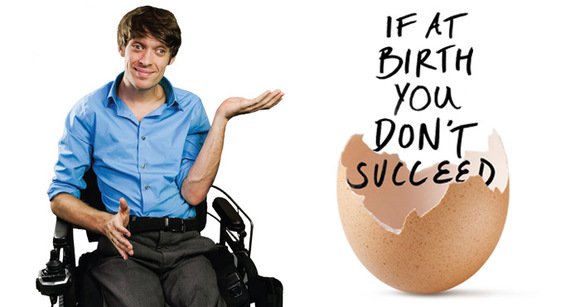 It's 8:00 a.m. on a Sunday morning and I'm bouncing on a trampoline surrounded by a film crew, shouting jokes into a camera. Soon, the doors of the Jumpstreet trampoline park in Austin, Texas, will open to a flood of children on their way to the best birthday parties ever, but for now it's empty and cavernous as my friends struggle to steady their cameras and boom poles while catapulting me up into the air like a rag doll. I'm thirty years old and being professionally silly is what I do for a living--or at least part of it.

I've been a comedian, hosted travel shows, explored world religions, started improv troupes, given keynote speeches at conferences around the country, and had a milk shake named after me called the Handicappuccino. I was also briefly an Oprah protégé and the subject of a John Mayer song (sadly, it wasn't "Your Body Is a Wonderland"). Not bad for a guy in a wheelchair who almost flunked out of kindergarten and whose only degrees are a GED and an honorary "Ducktorate" from the Disney College Program.

But on this cold February morning, I'm a fitness guru and we're filming an episode of my YouTube series Workout Wednesday. The theme of this ridiculous installment is "Bouncing Back," and I'm shouting every random esoteric pop culture reference I can think of to sell my audience on the idea that the greatest failures can also be catalysts for triumph. For me, that's been true from the start.

When I was born, instead of waiting to become an angelic, full-term bouncing cherub, I showed up two months early to my own birthday party as a three-pound, seven-ounce screaming hairless mole rat of a boy, kept alive by a series of tubes that would later become known as the Internet. I take full responsibility for this kerfuffle. Even though my mother was involved in the process, she'd gone through the whole ordeal with my brother a year earlier and he'd turned out great. There's no denying it: I was a crappy baby who failed his way into this world and I've been making the best of it ever since.

As a result of my untimely birth, I have cerebral palsy, which I guess, if you wanna get technical about it, is a neurological condition that can affect motor skills, speech, and mobility to varying degrees. In my case, it means that my movements resemble that of a marionette whose puppeteer is having passionate maritals behind the little red curtain. I use an electric wheelchair because I have no sense of balance and muscle spasticity has arched my spine like a cat's, while my legs are really just for show. I also have a lazy eye, but I believe that has less to do with the CP and more to do with the fact that as a baby I was operated on by an ophthalmologist who'd previously performed surgery only on giraffes. With my eyes unable to track, I never read, and I can't type, so I never thought I'd write a book, yet here you are, reading the first pages of my memoir like a champ. As it turns out, I'm somebody who was born in the wrong month, but at the right time to tell his unlikely--though not unlucky--story.

My success is as much a product of the age we live in as anything else. I gained notoriety thanks to a viral video, I got to work for Oprah thanks to the format of reality TV, I traveled the country using suggestions from the Internet, hell, I even met my girlfriend on Twitter. We've worked together on this book over Skype and Google Docs, while she was living in Berlin and I was six to nine time zones away in the United States. If I had been born only a few decades earlier, I might have been some mysterious recluse confined to a decrepit mansion who writes poems about what grass must feel like. Instead, I've lived a vibrant life and get to share my story with you.

In the following pages you'll read about all my career peaks and my many romantic valleys. You'll get a behind-the-scenes look of what it's like to work at Disney World and also what it's like to narrowly avoid self-castration. I hope you'll find these stories relatable, humorous, and meaningful, because if not, there's just a lot of really embarrassing shit in here. Some of these stories would have been too personal and painful to share if I didn't think they had the potential to help other people feel a little more comfortable in their own skin. For better or worse, I have now published all the things that up until this point I was too ashamed to tell my mother.

My life didn't really make a whole lot of sense to me before I started writing this book. How on earth did I get my own TV show from the most powerful woman in the world before I had my first kiss from a girl? How did somebody who couldn't get a job cold-calling people for magazine subscriptions end up in the entertainment industry? How did a kid who was unable to legally obtain a driver's license blossom into a man who was trusted behind the wheel of the Mars Rover? And how did a guy who regularly falls off toilets make friends who would literally carry him up mountains? What I've learned from taking a bird's-eye view of my life so far is that the good fortune I've had has come from seizing not just my moments but my mistakes. I might not be able to tie my own shoelaces, but if there's one skill I've perfected, it's the art of finding the humor and the purpose in every failure. I've accepted that we've all got crap to deal with and problems that we're fighting not to be defined by. At the end of the day, we all want the same stuff: fulfillment, love, support, comfort, and a hot-air balloon with laser guns attached to it. The most important thing is that we appreciate the crazy ride we're on.

The "Bouncing Back" Workout Wednesday episode ended with my friends launching me into a trampoline wall in an epic wipeout. As I lay there, sweaty and bruised, the only thing I had energy left to do was nurse my whiplash and go get some breakfast tacos. But then my friend and cameraman Chris Demarais came up to me with a twinkle in his eye and said, "You know, this place has a mechanical bull. Would you be up for filming another one?"

I considered my exhaustion and the risk of injury, anticipated the impatient line of gawking eight-year-olds, and decided to grab the bull by the horns.

"Sure," I said. "Just let me catch my breath." Because I knew that no matter how this shook out, getting creamed on a trampoline and riding a mechanical bull is a pretty badass way to spend a Sunday morning. 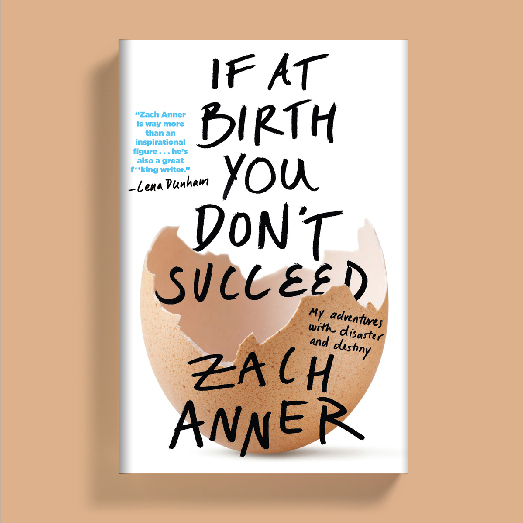 Zach Anner is an award-winning comedian, show host, and public speaker. In 2011, he won his own travel show on the Oprah Winfrey Network, Rollin' With Zach. He also hosted the Web series Have A Little Faith for Rainn Wilson's media company SoulPancake, and Riding Shotgun and Workout Wednesdays on his YouTube channel, which has over twelve million hits. Zach lives in Buffalo, New York, and Austin, Texas, and spends most of his spare time in his underwear, thinking about how he can change the world.