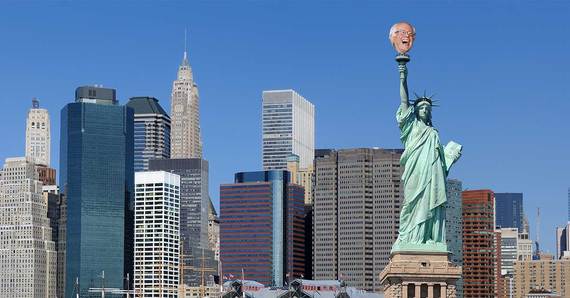 Bernie is right. The road to the White House will be paved by a win in New York. While living in New York City for the last few years I've been told that when New Yorkers come together they can accomplish extraordinary feats. Well, now is our time. If we can win New York for Bernie, our efforts will light the fire on Lady Liberty's torch, which we'll use to Bern the entire nation 🔥 🔥 🔥! Though, to be honest, it won't be easy.

The Fight Against Corruption

New York is one of the most corrupt blue states in the union and it is the beacon of the Democratic establishment. There is symbolism here. New York City has the highest wealth disparity in the country. Wall Street, big money, big media, big brother. Every entity we are fighting against is in our backyard. This is where we must break the idolization of the wealthy and create opportunities for all of us.

I've written previously about the New York Bubble. In 2014, the voter turnout was at it's lowest in 40 years, since the Board of Elections began tracking it. Only 31 percent living in NY State (21 percent in NYC) voted, compared to 1974 when 75 percent in NY State (63 percent in NYC) voted. Besides dealing with activating disillusioned voters, we have many Independents, Republicans, and other non-Democrats, like myself, that will be disenfranchised this primary. Furthermore, there are reports of registrations suspiciously disappearing from the Board of Elections' records for people that had been registered as a Democrat for years. I'm worried New York will be the Democrat's Arizona.

The good news is we've signed up 40,000 new voters in the last few weeks before the registration deadline. Polls also show that Bernie went from being behind by 48 points in New York to only being down 12 points. This was possibly attributed to landslide victories in the Western Showdown last week. Wins in Wisconsin and Wyoming in the upcoming primaries will further help our cause.

With Your Help, We Can WIN

New Yorkers can't expect to just win easily here though. We have to physically work for those votes. We're trying to climb up the Everest while big money and special interest groups at the top of the mountain throw boulders down at us to make us fall. If we do it together, however, we can WIN.

The final step will be to persuade existing Democratic voters to #FeelTheBern and get all Bernie voters out to the polls on April 19th. We will need to canvass, flyer, phonebank, talk to our friends and family, and inform anyone that is open to listening about Bernie Sanders and our platform. For those that live in New York City, it means we're gonna have to make eye contact with other people while opening your mouth to speak to them. People in other parts of the country don't know this, but New Yorkers tend to be awkward when they have to communicate with another human being on a personal level. We can be in any other part of the world and we'll smile and talk to others, but in New York City ¯\_(ツ)_/¯. We must get with it. Every New York Bernie supporter should commit to bringing AT LEAST 10 people to the polls. I've committed to informing at least 1,000 New Yorkers about Bernie and I'm probably a quarter of the way there. I promise, we can resume being the assholes we are 😜 on April 20th, when we light up a joint in celebration of our win while also protesting the War on Drugs 🌲🔥💨.

We must WIN. I would love to win by a wide margin, but even if it's by one percent, we must win. If we lose, even by a tenth of a percent, the media will be on full blast crowning her the Queen. If Bernie wins, the race will pivot and our momentum will change the narrative. The media will increase their attacks, but the people will have already been awoken by Bernie's message. We can then start blasting through other states with a large sign that says, "New York is Berning". We have to prove it. We have to bring our people to the polls. Mobilize. 13 days. This is not a joke. This is our life.

I'm not going to ask for your help. I'm going to tell you, that if you wanna win, you must put in your time.

Do you have any other method of informing voters that I missed? Comment below.

For more articles, videos, and show information, check out my website at SadiqSamani.com