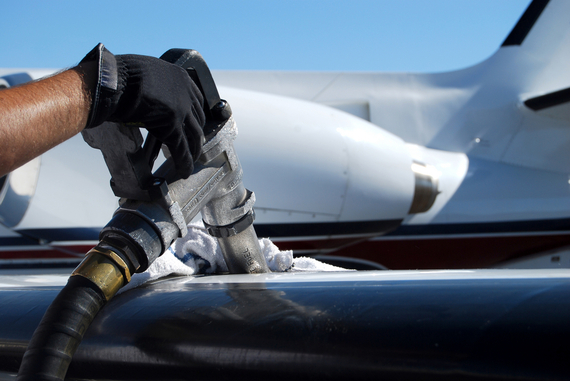 If fuel prices are so low, why are air fares so high? And will prices ever return to Earth?

They're simple questions with complicated answers. But Jake Oakman, for one, would like to know. So would many holiday travelers.

Oakman, who works for the state of Indiana, usually spends between $350 and $425 for a round-trip flight from Indianapolis to Hartford, Conn., to visit his family for Christmas. But this year, despite sinking energy prices, he faced a hard choice. He watched as round-trip fares soared past $425, then $450, then settled near $525.

"That's when I decided to drive," he said.

The 1,674-mile road trip to Connecticut will take him about 26 hours, but an analysis by Priceline.com suggests he'll pay about $172 at current fuel prices, a savings of $353. But it raises the question: Why are air fares sky-high, at least in comparison to fuel prices?

Turns out, a series of industry developments have put airlines firmly in control of prices, in a way they haven't been in perhaps a generation. As a result, fares may be about to rise even more. Fortunately, that doesn't mean travelers have to overpay for their tickets.

Historically, air fares have been tied to the price of energy. Fuel accounts for roughly one-quarter to one-third of an airline's operating cost. But that dynamic is quietly changing.

A study by the air fare Web site Hopper.com found that last month, jet fuel prices fell 12 percent, while fares only came down 1 percent. In fact, airline costs and fares aren't that closely linked anymore. Since last December, fares have increased 3.6 times faster than airline operating expenses from fuel costs, according to the site.

George Hoffer, a transportation economist at the University of Richmond, points to a recent slew of mergers, including between Continental Airlines and United Airlines, Northwest Airlines and Delta Air Lines, AirTran and Southwest Airlines and, most recently, American Airlines and US Airways. These corporate combinations eliminated so much competition that in some markets, airlines can now set their own prices. In airline parlance, this is referred to as pricing and capacity "discipline."

"It's much easier to maintain pricing and capacity discipline when it is only you and two other legacy carriers," Hoffer says.

But air fares tell only part of the story. Domestic airlines will also earn an estimated $15.4 billion this year from so-called ancillary revenue, a figure that's composed of earnings from frequent-flier programs and a la carte charges, such as luggage surcharges, according to a study by IdeaWorks, a consulting firm that advises airlines on fees. That's up from an estimated $14.3 billion last year. For someone like Oakman, that means having to pay extra to check a bag or reserve a seat, which pushes the price of flying even higher. These costs aren't always clearly disclosed when travelers shop for air fares.

Taken together, the net results are impressive: a predicted $8.3 billion industry profit this year, compared with a $5.8 billion profit last year, according to the International Air Transport Association, a trade group.

What's more, this takeoff appears to be on autopilot. Which is to say, with the exception of an occasional fare sale, airlines have little choice but to set their prices high and keep them that way. If they lower fares, that would stimulate demand for flying. They would have to add more flights to accommodate the new passengers. And there goes their capacity discipline.

"There is little incentive for them to lower fares unless people are showing a reluctance to travel," says Robert Mittelstaedt, an emeritus professor at Arizona State University's business school.

Besides, he adds, "Starbucks does not lower their prices when the price of coffee drops."

So will prices come down anytime soon? No one -- not the analysts, the airlines or the travel industry's soothsayers -- knows for sure. But most of them suspect fares will remain high, if not climb higher, as the prevailing winds favor the airlines.

"If customer demand is strong -- and relative to capacity, that's true for airlines today -- then falling costs will mean higher profits, not lower prices," says Edward Shelswell-White, who runs LexVolo, an aviation consultancy firm in Dallas. It would probably take a recession to reduce demand for fares, resulting in lower prices. Experts predict that until the economy falters, fares will stay at their current levels.

"As for people who can't afford to fly, the airlines really are not interested any more than Daimler-Benz is worried that many people cannot afford to purchase a Mercedes."

Passengers aren't out of options. Technology could help travelers find the lowest available fare. A site like Hopper.com can tell you if you've found a deal and disclose the best time to fly for a low fare. Other sites such as Yapta.com alert you to the cheapest price for your desired flight. You could also book a last-minute ticket on a site like Priceline, which sells tickets that would otherwise go unsold. These types of sites drive the airlines a little mad, because they allow passengers to play the airfare game as if they're trading orange juice futures, and they resent their seats being viewed as nothing more than a commodity.

Then again, you could get lucky and stumble upon an increasingly rare fare sale. That's exactly what happened to Oakman in the end. He didn't give up on flying and finally found a way to get to Hartford without breaking the bank. As the holidays drew closer, and just before this story went to press, he found a weekend fare sale online and pounced on the opportunity.