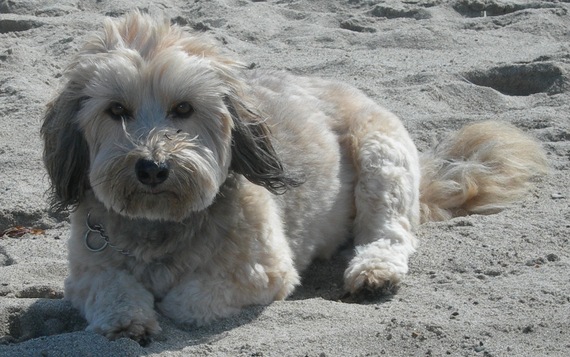 I'm so depressed. Murphy has cancer and we have to put him to sleep. I know he's just a dog but it's killing me ...

That was the text I got from one of my closest friends last week. I immediately picked up the phone to call her. "I'm just so sad," she was saying, "He's part of our family... what am I going to tell the kids?!" she cried into the phone. "...and I'm sorry to be telling you this, of all people!"

I know what she meant -- how does a dog's life and loss compare to the life and loss of my husband? They had the dog for eleven years. (My daughter had her father for thirteen). Murphy was part of their family. And now he was dying. It was sad. Their hearts were breaking. I didn't mind her telling me, though. Yes, this was a dog she was talking about, not her mother or father or husband. I've lost pets before and it's brutal. Grief is grief is grief.

I was at a friend's dinner party a while ago. I met a woman there who had just lost her mother a few days earlier. She was clearly upset, in the thick of those early days of grief. I offered her my condolences saying, "I'm so sorry for your loss, I understand." She asked me through her tears, "You've lost a parent, too?" I didn't want to steal her thunder, her grief was her own. But I did understand. Not her grief, but her loss. I said, "No, my husband died last year." She looked at me -- a look I'm all too familiar with. She was shocked. I saw her mind racing. We were around the same age. She took in my long, dark hair, my mostly wrinkle-free face, my skinny jeans... It's not that I look so young, but I don't "look like" a widow. She covered her heart with her hands, I saw her struggle to come up with the "right thing" to say. "Yours is worse!" she uttered. If grief is a contest, I guess I win.

A part of me believes that to be true. That my grief is worse than anyone's because you're not supposed to lose your husband when you're in your 40s and your daughter is only 13 years old and you're not done sharing your life with the person you love. There's something about the natural order of things. Our grandparents die when we are young, our parents die when we are adults, we lose our pets along the way, and our children outlive us all. But when it doesn't happen this way, the universe shifts. It's discombobulating. Surreal. And if you're talking to anyone who has lost a child -- and it really doesn't matter if that child is 5 years old or 50 -- there's not even a word to describe the kind of pain a parent suffers. Just ask my in-laws.

My grief seems to be unpredictable and manifests in different ways. Ever since Joel died, I'm tired all the time. Even if I've slept a solid eight hours. I'm also forgetful -- of dates, meetings, appointments. I decide what to cook for dinner, and by the time I get home with the groceries, I forget what it is I wanted to make. Joel used to run late for everything and it would drive me crazy. But now it's my inner clock that seems to have fallen off track. It's not that I'm always late, but I seem to be rushing constantly, just to be on time. I've also gained weight in my widowhood. My eating habits haven't changed. I exercise the same amount. All of these things could be side effects of my middle age. But when I mention it to doctors, friends, anyone... it all comes back to grief.

I'm not sure what grief is going to look like for my friend. We spoke after they put down her dog. She told me about the people who sent their condolences. How neighbors and friends said they'll miss seeing Murphy on walks, hearing the pitter patter of his paws when he sees a squirrel, his anxious, little bark when the doorbell rings. But they won't be setting up a meal train. No one will be sitting shiva. Everyone will miss that sweet dog, but for my friend and her family, their grief will be worse.

Widow-ish. I write about the yin/yang of grief & love...usually while eating chocolate.