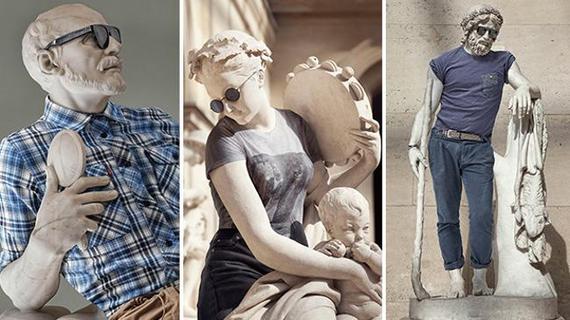 Setting aside all precedence of logic, spelling, and grammar, Donald Trump has waged his political campaign in large measure--or should I say "bigly"-- from his keyboard in 2016. Trump's use of Twitter affords the public a comparatively unique opportunity to consume the discernment processes and positions of one of its aspiring leaders in real time. From throwing invectives ("Crooked Hillary," "Goofy Elizabeth Warren," and "José Bush"), to calling on Barack Obama to resign (while simultaneously offering him a free lifetime golf membership at any of his courses), opinion varies on whether Trump's Twitter feed portrays him as strong or weak, savvy or irresponsible. Regardless of how one feels about our political options, this is a moment in which the most wide-spread and effective propaganda is no longer delivered in the form of narratives, monuments, statues, and inscriptions. Instead we have what the poet and essayist Jaswinder Bolina has called "this country's first fully linguistic campaign." No doubt academia will be analyzing the role social media platforms play in our elections for generations to come as we the people are now able to build a sense of intimacy with our soon-to-be historical figures, 140 characters at a time.

But before we had such immediate and copious exposure to these public characters, the tendency was to hold our heralded thinkers and leaders on a remote pedestal. Even in the case of someone reviled like Benedict Arnold, it doesn't take us long to generate a historical narrative and mythology that overwhelms our ability to distinguish fact from fiction. As the historian Eric Hobsbawm clearly maps out in his work on "Inventing Traditions," more often than not we allow the symbolic value of a story, law, or ritual to determine whether or not it becomes part of our collective conception of the past. George Washington did not chop down a cherry tree. The Scottish kilt was invented by an English Quaker. Mary Magdalene wasn't a prostitute. But does it matter?

For some the preservation and continuity of what Hobsbawm calls "a suitable historic past" is more important than reality. One can argue that this is why we often prefer to suppress unsavory or inconvenient details about history when it does not suit our purposes. To cite a recent example, when Hillary Clinton made her acceptance speech after securing the New York primary, she referenced the 19th Amendment which "finally gave women the right to vote." But she didn't clarify that American Indian and African American women would struggle to exercise that right for decades to follow. How many of our entertainment figures have avoided scrutiny over their alleged and proven crimes? Or, on a lighter note, John Lennon exaggerated his scouse accent and the bubbly balad "Got To Get You Into My Life" was actually about pot. The list goes on.

Yes, Trump's penchant for tweeting allows us to glimpse the man behind the curtain. But when he lashes out, offends, challenges, and self-promotes, how unique is he really? This leads me to a thought I've had more than once during this election cycle: What if some of our revered historical figures had had Twitter? Where would they fall on the Trumpian scale of personal revelation? I would have loved to witness Teddy Roosevelt or Winston Churchill or Picasso wielding their tweets to advantage. Think Kanye West is out there with his cultural and political commentary? Imagine if Lennon or Keith Moon had access to social media (for Moon I suspect there would be a lot of tweets that simply said "BOOM"). But I am a scholar of antiquity, so let's wind back the clock a little further.

If you set real quotes from historical figures in the context of the Twittersphere, you could argue that Trump isn't so unusual. Take Plato. According to the father of western philosophy, if you are a woman suffering from asthma, you might want to double check to make sure your uterus wasn't wandering around your body before jumping to the conclusion that it's just your lungs:

Of course, the whole idea of the wandering womb might make more sense if you were a student of Aristotle.

But these guys aren't too unique. Most ancient philosophers offered some kind of unsolicited advice about women and childbirth, including Hippocrates' useful tip for making sure you have a baby girl: 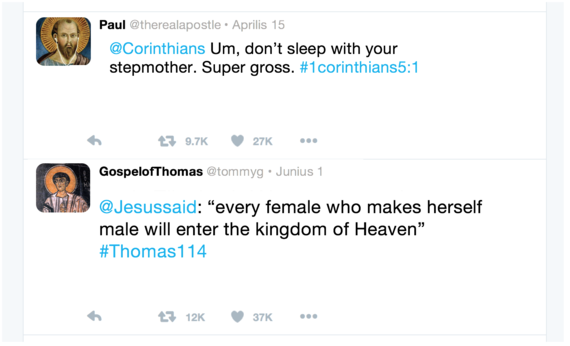 What about politics? According to Plutarch, Alexander the Great was a drunk. But he had a good excuse. In antiquity, really virile men would routinely overheat and the only reasonable way to cool down was with alcohol.

In ancient Rome, if you "lost" politically, you were what was called "damnatio memoriae": all images, inscriptions, and other traces of you were erased. Add to this that the nature of communication was (to us) painfully slow, and we lack some of the more interesting real-time conflicts that must have existed between warring factions. So let's fast forward about fifteen hundred years to what many call our first "dirty" political campaign: the contest between John Adams and Thomas Jefferson.

So where does this little experiment get us? When Trump uses offensive language in his tweets, or when he makes references to women or his perceived enemies with language usually reserved for your drunk uncle, he embodies the past. It's a past that placed people like Trump at the top of the social ladder. It's a past that has romanticized the notion of America's "greatness." The past is where his logic and his references lie. And he may not even realize it. When Todd Akin talked about "legitimate rape" in the last election, I doubt he realized that he was using misguided biological concepts that go back to Aristotle. I've written elsewhere about the ways in which our candidates, and Trump in particular, utilize political strategies that would be very much at home in the Roman empire. How would things have worked out differently in history if we had the kind of access to the everyday thoughts of our past leaders that we do now? In that respect, Twitter is a gift. What we have to decide is whether we want someone to lead us backwards or forward.

Dr. Walsh is Assistant Professor of the New Testament and Early Christianity at the University of Miami.