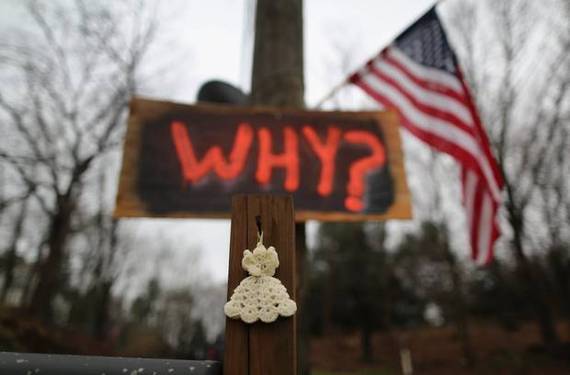 There's a reason why Americans make the pristine delineation between "radical Islamic terror" and "just another crazy person" intent on killing innocent people, or any of the other massive threats to our wellbeing (suicide, drunk driving, etc.) that are quickly glossed over by the majority of citizens. The hooded terrorist brandishing a knife on video incites enough passion to make 41 percent of Americans believe that U.S. ground troops should be sent back to Iraq; even after the counterinsurgency war ended in 2011 without a clear winner and even after the ongoing VA crisis. On the other hand, the disgruntled teen with a gun (even though gun violence kills more Americans than terrorism) never results in emails being read by the NSA or diatribes about the evils of Islam. The reason for such discrepancy in emotional reaction is because Americans see threats as neatly marketed, bite sized morsels where danger never resides in a grey area; ISIS makes for better television than discussing the causes of suicide. To be fair to gun advocates, the causes of suicide and the reasons why active shooters kill innocent people have nothing to do with inanimate objects. There are aspects of our society that have desensitized individuals to the point where others have to suffer for their problems and many people are forced to end their lives as opposed to continuing their existence due to complex issues. Not everything can be blamed on weapons, especially since killers in China murder children in nurseries with knives, but guns do play a factor in American violence. Furthermore, "terror" is almost always what others can do to us, not what we can do to ourselves.

Adam Lanza is rightfully the personification evil to most people, however we process this evil in a uniquely American manner. If this monster had a Muslim name, links to ISIS, and committed the horrific and unspeakable act of murdering 20 innocent children and 6 staff in an American elementary school in the name of "radical Islamic terror," the NRA would have sung a different tune. Republicans and conservatives everywhere would be in a frenzy, calls for war would be heard from both sides of the aisle, and the American people would be fixated on the next Muslim terrorist planning to kill our youth. Multiply this paranoia by at least 11 "planned mass shootings at a school since Sandy Hook" and ask yourself what would have consumed our society as a result of these murders.

According to Harvard University, mass shootings are on the rise:

The rate of mass shootings in the United States has tripled since 2011, according to a new analysis by researchers from Harvard School of Public Health and Northeastern University. In the last three years, there have been 14 mass shootings--defined as public attacks in which the shooter and victims were generally unknown to each other and four or more people were killed--occurring on average every 64 days. During the previous 29 years, mass shootings occurred on average every 200 days.

If the 14 mass shootings cited by Harvard were the result of Muslims killing in the name of Islam, how would our society have reacted? Is "terror" only the beheading of a journalist on video or it is also the madman who enters a movie theater and sprays the moviegoers with bullets?

No, the fact that mass shootings take place in this country does not mitigate (nor does it condone in any way) the threat posed by ISIS, al-Qaeda, or any other terrorist who utilizes Islam, or any other religion, to justify the killing of innocent people. If this is your reaction to the arguments presented in this article, rest assured that I am vehemently against everything terrorists stand for and represent. However, Ebola and ISIS have dominated the news for a reason and other far more serious threats to our nation never seem to make the headlines in a similar manner.

American deaths from suicide, mass shootings, drunk driving, gang violence, illegal drug addiction, and other dangers never elicit the same emotions in our country as a beheading video. In 2012, MADD states that 10,322 Americans died in drunk driving accidents and 290,000 people were injured in drunk driving crashes. The Centers for Disease Control and Prevention has attributed "88,000 deaths and 2.5 million years of potential life lost (YPLL) each year in the United States from 2006 -- 2010" to excessive alcohol consumption. As for drug use, according to RAND data Americans spend $28.3 billion on cocaine, $27 billion on heroin, and $13 billion on meth. Thus, according to the CDC, "Every day in the United States, 114 people die as a result of drug overdose, and another 6,748 are treated in emergency departments (ED) for the misuse or abuse of drugs." America's drug addiction correlates directly to the scourge of drug cartels on the border-who do you think they're selling to? As for gang violence, the CDC states that "Homicide is the second leading cause of death among persons aged 15-24 years in the United States." From 2007-2012, The National Gang Center reports that there were an average of 2,000 gang homicides annually.

Regarding suicide, this silent killer for some reason doesn't makes the nightly news. In 2010, Harvard University states that 19,392 people committed suicide using a gun in the United States. The Washington Post reports that the same people we send to fight terror have a much higher suicide rate than the average American:

As for veterans, from 2008-2014, an average of 22 veterans committed suicide every day according to Breitbart.com. The fact that more people have heard about Ebola and ISIS in the past month than the suicide epidemic among veterans and soldiers speaks volumes about American society and what we view as threats to our nation.

To inquire as to why there's such a deep chasm of sentiment between the various dangers we face and the word "terror" does not, in any way, condone the genocidal and dastardly acts of terrorists like ISIS. That being said, we've waged two wars and somewhat altered our ideals (especially pertaining to privacy, torture, drones, and other aspects of our war against terror) in order to keep our nation safe from groups like al-Qaeda. Therefore, let's analyze the terror threat. From 2009 to 2013, between 9 and 19 Americans died annually from terrorism according to numbers compiled by the U.S. Department of State. In 2013, the State Department lists 16 Americans (not counting the three citizens murdered in the Boston Marathon Bombing) who died from terrorism. As for terrorism worldwide, we might be waging a war against terror in order to protect people in other countries. The State Department explains the scope of terrorism abroad, compared to its impact in America:

For the vast majority of terrorist attacks in Iraq (84.1%), no perpetrator group was identified. Of the remaining attacks, more than 98 percent were attributed to al-Qa'ida in Iraq, which began referring to itself as the Islamic State of Iraq and the Levant in 2013.

The phrase, "which began referring to itself as the Islamic State of Iraq and the Levant in 2013" explains how al-Qaeda has rebranded itself in 2014. Also, while 19 Americans died in 2013, over 17,800 people (who were not American) died from terrorism.

Finally, let's say that none of the arguments presented here make sense and that everything I've written is convoluted and ignores the real danger of ISIS. Therefore, one would expect Congress to decide upon whether or not we should declare war, correct? Wrong. As stated by novelist, journalist, and Iraq and Afghanistan veteran Tom Young in his latest Huffington Post piece titled, "What You Owe Your Military," Congress has deliberately ignored its responsibilities for the sake of politics:

In an act of appalling political cowardice, the 113th Congress left Washington in September refusing to vote on or even debate an Authorization for Use of Military Force against ISIS. Leaders offered lame excuses.

... As you read this, military aircrews are likely suiting up for their next sorties against ISIS. Unlike members of Congress, they don't get to wait until it's more politically expedient.

Even with all the Republicans bemoaning Obama's tyranny, and all the Democrats claiming that the Iraq War was a mistake, Congress in aggregate doesn't have the courage or conviction to make a decision pertaining to ISIS. What does that tell you about the threat you see nightly on the news?

There's a greater chance that the average American dies from gun violence in this country than from an ISIS sleeper cell or Ebola. The real threats and dangers to America aren't terrorism, they're killers like the causes of suicide, or the guy who drank too much after a party running you over at night. The real problem is that none of these dangers make for good television, or incite "outrage" so we simply chalk them up as part of life. We rationalize violence and death in order to suit our political sensibilities and as Americans, we view the hooded terrorists "over there" as a greater threat than the active shooter wreaking havoc on our schools. Ultimately, as a sad testament to where we're at as a society, if the mass shootings in this country were done "in the name of Islam," Congress would have already acted on a declaration of war. To state this reality doesn't mitigate terrorism, it simply highlights the disingenuous manner we view violence and death, as well as the pandering nature of our politicians.