Early Tuesday morning, my friend and beloved D.C. actor Frank Britton was attacked and robbed by four men on his way home after an Opening Night celebration in Silver Spring, Maryland. Frank, who does not have health insurance, will have to undergo surgery to repair his shattered cheek. Despite this harrowing incident, his positive and sweet disposition has remained intact. 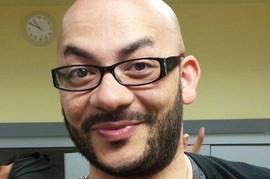 In the hours following his attack, the D.C. theater community, filled with more actors working for free and low wages than not, came together in a remarkable effort to raise money to help Frank pay his medical bills. In less than 24 hours, more than $35,000 was raised, with more than 1,000 people giving whatever they could.

These actors, whose contact with members of the media has for the most part involved theater critics and arts editors, found a surprising ally in local broadcast news. Multiple TV crews, radio stations, and journalists dedicated time to speak with loved ones, and even Frank, about his ordeal. They directed listeners and viewers to the fund raising money for his recovery, and asked for the community's help to catch the men who attacked him.

Many are quick to vilify the media for the old adage, "If it bleeds, it leads." The notion is that substantive news stories are often bumped for coverage of a violent crime. Some of us are also quick to criticize reporters who swoop in following violence in a community to interview next of kin, or loved ones awaiting news of a survivor, while in the midst of their grief. Such stories tend to focus on the violent act rather than the surrounding circumstances -- the culture -- that produced it.

By now, the nation has learned about the tragic events that occurred over the weekend in Isla Vista, California. In the days following similar tragedies, emotional family members have pleaded, often through the media, for reform that might take steps to prevent similar tragedies from occurring. But when the survivors of Virginia Tech, Sandy Hook, and Isla Vista fade from the spotlight, so does the media's focus on the underlying conditions and the threads that connect them to the violent acts.

Many news programs have done an excellent job of returning to survivors to see how they have overcome a tragedy. Recently, moving pieces were broadcast on nearly every major network around the anniversary of the Boston Marathon bombing. But far fewer continue to look at the homegrown terrorism that was at the core of this attack.

We must help the media break its cycle of moving from crime to crime without exploring the aftermath.

Today, I am grateful that Frank's attack shifted focus for local news organizations. But tomorrow, I wish they'd use their megaphone to remind local citizens to be vigilant, to inquire about better lighting and police monitoring of popular downtown spots, and to push for accountability in bringing the attackers to justice.