Witty, prolific hacker Jasper Nance is hard to miss. She has been one of the most active members of Arizona's first hackerspace, HeatSync labs, and before then she had been working on numerous near space balloon projects. When she's not busy working on her radio, microscope, photography or software projects, she finds time to teach people about engineering and science, and she even makes time for interviews.

Can you explain a little bit about who you are and what you do? 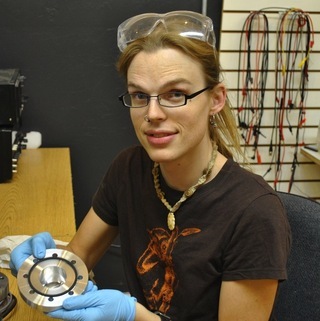 You are involved in a wide array of projects... electronics, photography, radio, microscope, astronomy, machining, software... What is the most exciting project you've ever worked on?

JN: That's a tough question to answer! I've worked on many different projects, depending on what my interests are at the time. Photography is what I get recognized for the most, though.

You are an amazing photographer, your portfolio is stunning. How did you begin experimenting with microsecond high-speed photography? Can you explain a little bit of how it works?

JN: I wanted to photographically capture a bullet in flight, as well as other similarly timed events such as explosions. I didn't have any fancy equipment when I began, I was a poor college student, so I scotch-taped double lenses together and built or modified equipment, like a flash bulb. My father let me use his garage and guns to shoot fruit [for my first test photos]. 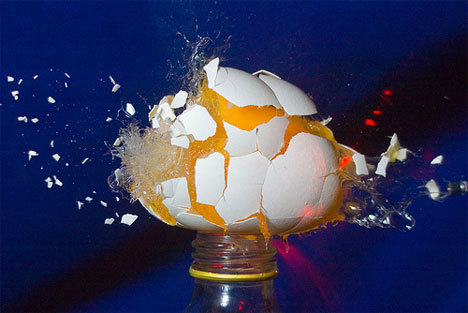 There are a lot of variables to consider when taking a high-speed photo, like lighting, timing and shutter speed...

Being technically oriented, I am more interested in the process of HOW to build and set up conditions for a photograph... making a glossy, finished product isn't my main concern. In the past couple of years, my focus shifted to take it to the next level, to make art. Most people aren't as interested in how something works as much as with how it looks... Engineers aren't normally good at marketing what they do as being fun or exciting. [laughs]

Jasper created a microsecond flash unit, time-lapse camera controller, 3D-printed LED Ringflash and an automatic camera trigger over the course of her experiments, as detailed in her informative blog.

Were you involved in the creation of Heatsync Labs, Arizona's first hackerspace?

JN: I wasn't involved with the creation of HeatSync, but I became an active member. When I joined, we had about 8 members. But we were in a closet... a software incubator that let us use the space. I joined because they were doing near-space balloon projects, and so was I. We knew we wanted a bigger space, and more members. So eventually we crowd-sourced money for HeatSync's current storefront space.

Something that initially discouraged me from attending hackerspaces was the lack of people who I could relate to and identify with. For a while I didn't see many women, queer identified people, people of color, or working-class people.

Did you ever feel any trepidation coming into hackerspaces, and if so, how did you deal with it? What advice would you give to a new (potentially shy) person going to a hackerspace?

JN: Have a project, and ask for help! Don't go into [a hackerspace] with any expectations of what other people are doing or think of you. If you ask a lot of questions, you would be surprised how nice and helpful some people can be at hackerspaces.

Maybe people don't share the same life background or experiences, but there are people who love to collaborate on projects and those are the people to seek out... people with a similar project or hobby.

If you want a more detailed explanation on high-speed photography, check out Jasper's EHSM lecture on our YouTube channel.

If you are interested in more projects like Jasper's, and others that push the frontiers of DIY and open source technology, join us at the Exceptionally Hard and Soft Meeting (EHSM). The EHSM is taking place this year at DESY in Hamburg, Germany from June 27- June 29th.