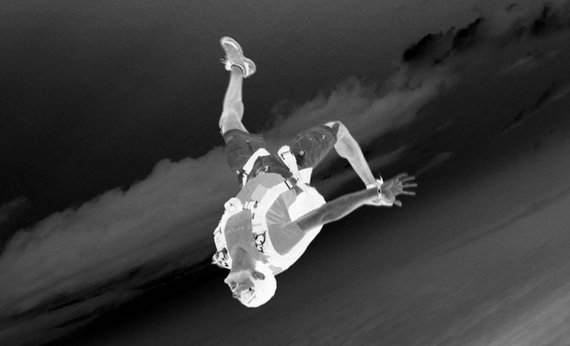 "You jump off a cliff and you assemble an airplane on the way down." - Reid Hoffman, American Entrepreneur

Blanketed under thousands of stars, the warmth of the sun, and the shade of skyscrapers, it's easy to become too relaxed that one just daydreams. But what can wake him up?

Dreaming in a state of complete security, although beautiful in its sound, has similarly become an omen to the economy. The marriage of rote learning and a pampered environment has universally done damage in the region.

Education in the twentieth century became globalized, thus, we focused on measuring performance by exam scores through rote learning - so that our services and knowledge are transferable to other parts of the world - from universities to the workforce.

In the GCC specifically, more often than not, most locals are sponsored by a company that they will work for upon graduating for a contracted amount of years. This brings up two concerns, that people who score higher and possess great intellect are often priority choices by sponsorships, which means the intellectually elite are being weeded out and hoarded by sponsors; the public sector.

Secondly, the problem we face regarding sponsorships is that university years and years following are among the most pivotal and mentally astute times for an individual, and because the individual is sponsored throughout university, there is no real incentive through his academic journey to wonder how he can apply his skills.

Think of the writer, he is not constantly writing, but he is constantly thinking about what he'll write 24/7. If the student has a secured career plan set for him, there is no need to be thinking and exercising creativity, because unlike the writer, he already knows his outcome.

In my humble opinion, as I've briefly touched on in Beyond the Barrel, I believe that the leading problem is not rooted in the type of system government rules by, as many monarchies are successful -rather the policies that inhibit development.

Hoarding in the Public Sector:

A way to dull the damaging end of sponsorship's double-edged sword is by having sponsors collaborating with entrepreneurial incubators and accelerators. This collaboration could give the student job security, but at the same time signal it is not mandatory by giving him the chance to explore the entrepreneurial route upon graduating instead. This will knock three birds with one stone. Firstly, it will enhance the sponsored company's human capital by ensuring only those passionate will be working within them. Secondly and simultaneously, it will restore the individual's capacity to think and apply as he moves through university -because although he has job security with his sponsorship, a part of him knows he is insured and secured to create -if a good idea hits him before and upon graduating. Thirdly, it will end the hoarding of human capital in the public sector.

"The local's involvement in the private sector was not intentionally neglected during the past decades, rather, the region similarly, could not anticipate what this blessed incoming of foreigners could lead to in the 21st century."

Like for every country, there's always an "if we had only done this, then we wouldn't burden this today" moment. The positive news is that regional leaders today have that realization and have been since pushing locals to diversify themselves throughout all sectors.

According to the 2015 Gulf Labour Markets and Migration Report from the Robert Schuman Centre for Advanced Studies at the European University Institute, "Emiratis comprised 60 per cent of the total workforce in the public sector in 2013, but only 0.5 per cent of the private sector's workforce."

In the United Arab Emirates, much of this statistic is attributed to its recent history. Foreign workers in Sharjah soared from 44,000 to 420,000 from 1960 to 1980s, similarly in Abu Dhabi the foreign workforce went from 59,000 to 279,000. This was due to the expansion of the union, from the exportation of oil in the 1960s which called for more workers to the unification of the Emirates in 1971.

The oil was a blessing at this time, as it supported the early foundations of the union, but also ushered in an economic learning process that made them realize they must invest beyond the barrel.

According to the report, the 2000s led to introspective thinking on ways to diversify the economy -which led to focuses on education, tourism, community development projects and international business. Inevitably, this ushered the need for more foreign specialists, which grew into greater foreign interest, which has led to the domination of foreigners in the private sector.

Incubators play a large role in pushing individuals to take a jump. In particular, as this piece is focused on sponsorships and the pivotal time of the young adult; university incubators and accelerators are the most vital. Incubators are innovation labs that encourage an entrepreneurial environment, often leading to greater contributions of goods and services to both the nation and possibly exported internationally.

The United Arab Emirates boasts the prestigious NYU Abu Dhabi, which I praise in that it provides locals with an international experience within the reach of their home, and provides for a fruitful exchange between locals and internationals.

However, national universities have the capacity to revise curriculums and expand the academy itself on their terms because they are not defined by contracts and restrictions from external parties. This agenda can be pushed forward through the growth and maintenance of university and incubation collaborations.

Universities are the pillars of a country, thus it is imperative that national universities are prioritized on agendas in meeting the survival of the innovativest challenge the twentieth century heralds.

Parents are always wondering, founding fathers of the country, and men who stay up late penning policies, all always wonder how can we push our children to jump, create, innovate, fly beyond the natural habit they grew into of being absorbed in the public sector - and produce.

Sponsorship system revisions and enhancement of national university accelerators and incubators will ensure this.

At the launch of Sheraa, HE Marwan bin Jassim Al Sarkal said, "Entrepreneurship is one of the most important determinants of economic growth in the various countries of the world. Why the university? Because the university embraces the youth, global entrepreneurs started their work at universities."

The equipment is in place; incubators. Now we must show the youth that parachutes will catch them if they jump and are unable to assemble an airplane on their way down. The parachutes will induce a risk-averse individual into a skydiver. This parachute is a sponsorship system that cultivates, not confines.

Once one's mind is unlocked to think beyond and experiences the flight of an idea, he'll forever yearn to return to that sensation; of thinking and prospectively creating.

"Once you have tasted flight, you will forever walk the earth with your eyes turned skyward, for there you have been, and there you will always long to return." ― Leonardo da Vinci"