Like America and apple pie, football and dogs just seem to go together. Maybe it's the close proximity of the biggest televised events in both sectors -- the Super Bowl on Feb. 2 and the Westminster Kennel Club dog show on Feb. 10-11 -- but the connection is undeniable.

Animal Planet knows it, as evidenced by their brilliant counter-programming with Puppy Bowl, now in its 10th -- sorry, Xth -- year. The mad men of Madison Avenue know it. And whether conscious or not, social media knows it, too: In the past seven days, there were 2,619,100 tweets about dogs and 2,281,818 tweets about the Super Bowl -- relatively similar in the big scheme of things.

Football fans have a lot in common with dog lovers. Both groups rattle off statistics ("Did you know that the Papillon is the only Toy breed to be ranked among the top 10 most intelligent dog breeds?"), talk incessantly about their favorites (did I mention Papillons?), and are glued to their screens when their obsession is onscreen, much to the frustration of non-devotees. And football players and dogs also share some key characteristics -- both groups are highly beloved, can easily become spoiled, and both spend a lot of time marking their territory (not surprisingly, this is messier, harder to clean up, and more likely to involve lawyers with non-canines).

As social scientists, we got to thinking... if Super Bowl players were dogs, what type of dogs would they be? Applying a combined 280-plus dog years of expertise in research, statistical analysis, the media and poop-scooping, we found that the way the media describes star football players is remarkably similar to the official breed standard for top show dogs.

We looked at selected Denver Broncos and Seattle Seahawks players' media coverage in online, print and broadcast media over the past few years, giving priority to the most recent coverage. Special emphasis was placed on individual profile articles, interviews, and articles that evaluated players' athletic strengths and weaknesses. From this coverage we identified key attributes most frequently assigned to the players' personality and playing style. The resulting list of descriptors included qualities such as energy level, size, independence, athleticism, physicality and extroversion.

Using these descriptors, we compared the attributes of players to official dog breed standards and breed guides. We identified breeds and players with the most overlap. Although the players and dogs were not exact matches, we looked at how prominently specific attributes were emphasized and matched the two groups accordingly. When breed selection was a toss-up, descriptors about players' personalities were given more weight than those focusing on physicality.

Some of the match-ups were rather self-evident. For example, when Seahawks defensive end Red Bryant lumbered his way into our hearts this season with his pick-six against the Chicago Bears, intercepting a Caleb Hanie pass and taking his 6' 4", 323-pound self into the end zone with obvious joy and pride -- well, if that's not a Basset Hound, we don't know what is.

Some were less obvious, i.e., Peyton Manning = Poodle. (Okay, maybe that was kind of obvious.)

Among the key findings: The Seahawks are dominated by hounds, with 60 percent of their star players falling into this group of breeds. In contrast, the Broncos' top players are remarkably diverse, representing breeds from the Herding, Hound, Non-Sporting and Working Groups, as well as one hybrid breed (the Goldador).

So who's the Doberman Pinscher and who's the Pug? Click the presentation below to find out.

This study was conducted in collaboration with Mary McCarty Earley, president of MME Research, a competitive and media intelligence firm. She holds a Master's degree in Information Science from Catholic University in Washington D.C. In her spare time, she writes a column on dogs for Persephone Magazine.

PHOTO GALLERY
If Super Bowl Players Were Dogs
Download
Calling all HuffPost superfans!
Sign up for membership to become a founding member and help shape HuffPost's next chapter
Join HuffPost 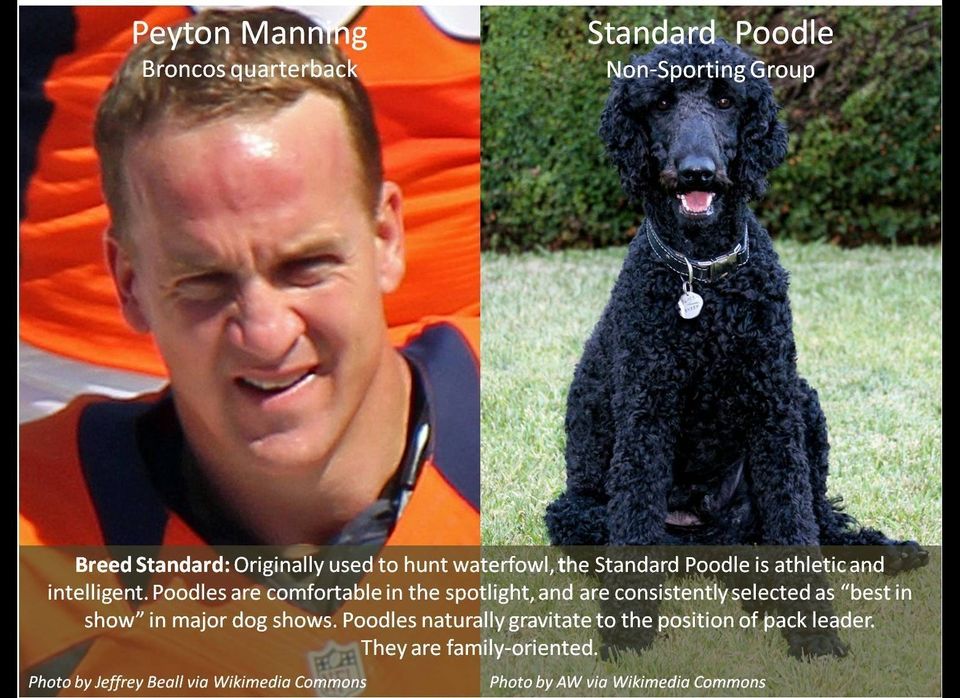 1 / 10
Peyton Manning = Standard Poodle
Breed Standard: Originally used to hunt waterfowl, the Standard Poodle is athletic and intelligent. Poodles are comfortable in the spotlight, and are consistently selected as “best in show” in major dog shows. Poodles naturally gravitate to the position of pack leader.They are family-oriented.