This year marks the whitest Oscars since 1998, with all 20 acting nominations given to white folks. Equally awesome: Zero female directors, screenwriters, or cinematographers were nominated, and according to Women’s Media Center, among the 184 nominees across 19 non-acting categories, only 35 are women.

And so the Academy Award goes to… white dudes. This stark imbalance in both racial and gender diversity in Hollywood is manifested visually on the posters that represent the biggest films of the year. More often than not, white men are selected as the representatives for the movies they star in, even when they have equally signifigant female costars.

To illustrate “Gone Girl,” Ben Affleck is more prominently pictured, despite the fact that the Gone Girl in question is the driving force behind the plot. The main poster for "Interstellar" only shows Matthew McConaughey, and wasn't "Boyhood" as much about the women in the movie as the male characters?

The Hollywood landscape is even bleaker for women of color. There have been just nine black women nominated for the Best Actress Oscar in over 85 years, which could explain why you’d be hard-pressed to find a movie poster displaying a black woman’s face.

So, HuffPost Women imagined what it would look like if *gasp* white men didn’t exist on these posters. Their absence is striking:

Here are the posters for the 2014 Best Picture nominees: 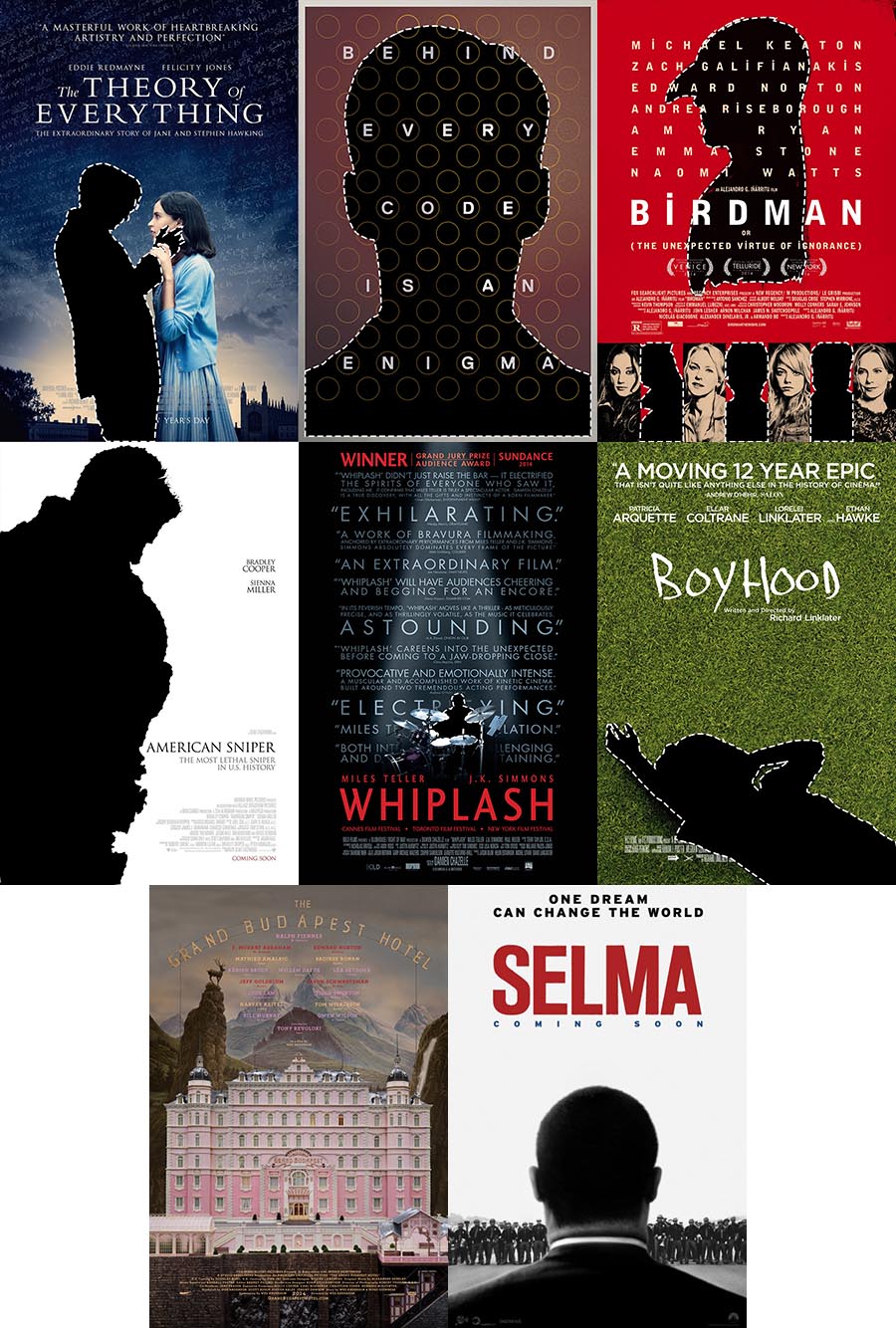 Here are the posters for the 2013 Best Picture nominees: 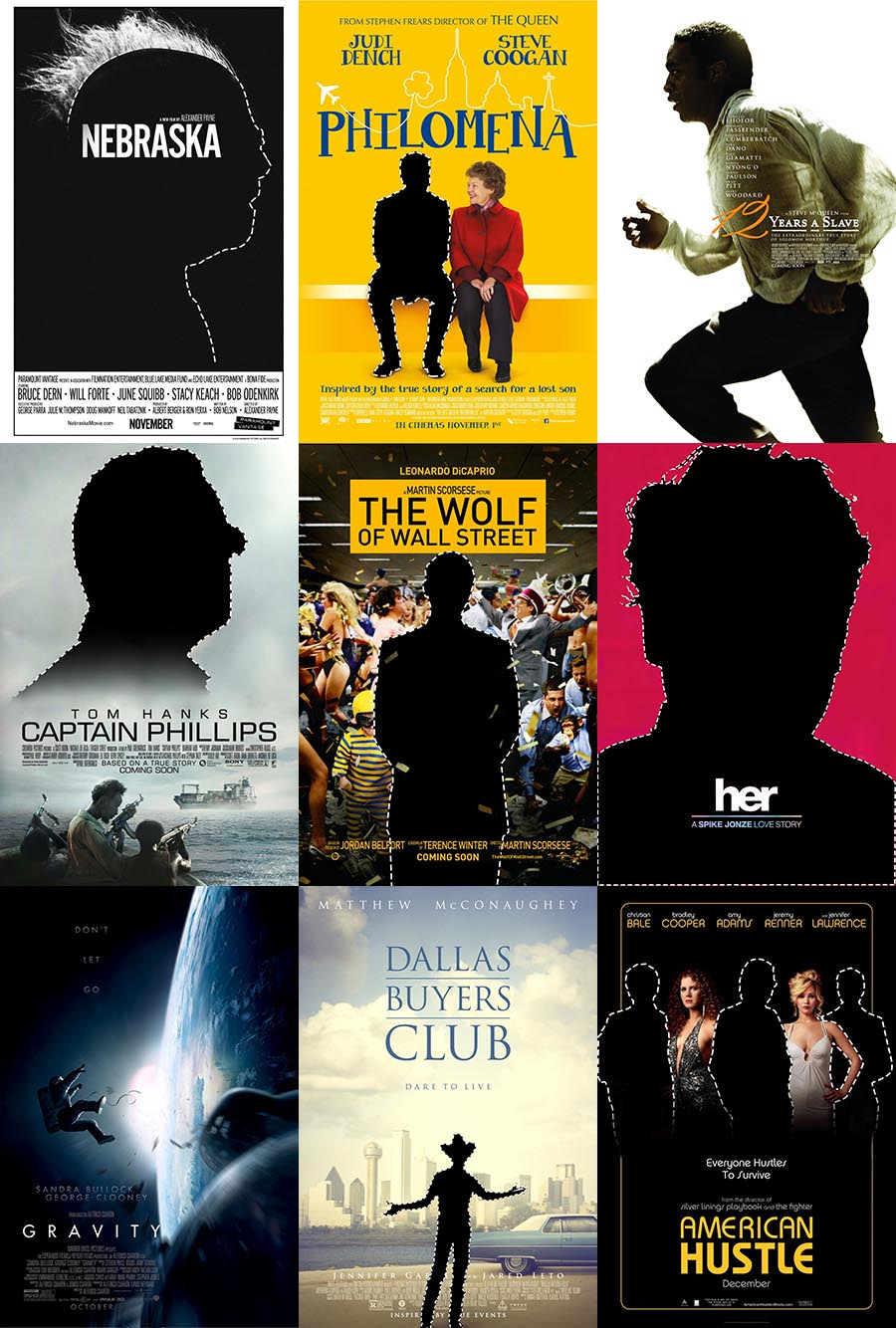 Academy president Cheryl Boone Isaacs -- notably the first black person in her position -- denies that the academy has a problem recognizing diversity, but the demographics of the organization's members tell a different story. According to a 2012 LA Times study, Oscar voters are nearly 94 percent white and 77 percent male, with a median age of 62. Those numbers certainly don't mirror the composition of those who actually see movies -- women have made up a larger share of moviegoers since 2009, and while whites are the largest racial group who see movies in theaters at least once a year, the gap has decreased over the last five years.

In a scathing December op-ed for The Hollywood Reporter, comedian Chris Rock elaborated on how that current framework enables Hollywood to remain mostly white and mostly male.

“When it comes to casting, Hollywood pretty much decides to cast a black guy or they don't. We're never on the ‘short list.’ We're never ‘in the mix.’ ... I never heard anyone go, ‘Is it going to be Amy Adams or Gabrielle Union?’” he wrote. “You can go to whole movies and not see one black woman... I go to the movies almost every week, and I can go a month and not see a black woman having an actual speaking part in a movie. That's the truth.”

Of course, jobs, and therefore nominations, should be based on merit. But until opportunities for the former, and subsequently the latter, include faces of all types, audiences who long for more diversity will continue to be disappointed.

“'Birdman' was a great film and Michael Keaton was great in it,” Reign said, “but when the producers and studio heads were thinking about how to cast it, did Andy Garcia come up in those conversations? Was Ken Watanabe's name mentioned? Did someone call Dennis Haysbert's agent?... the movie could have easily been called ‘Birdwoman’ and Sandra Bullock or Demi Moore could have shined in the role.”

If White Dudes Were Erased From Oscar Movies
Oscars Photos 2014