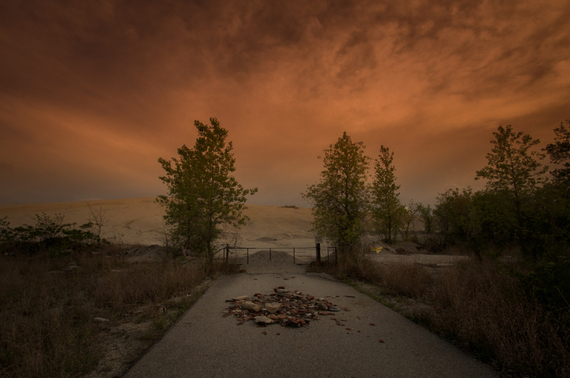 The EPA refers to it as the most toxic place in America, but it's better known as Picher, Oklahoma. The apocalyptic theatrical landscape serves as a rather cryptic backdrop to this once thriving American city, a constant reminder of what happens when mankind doesn't respect nature and the environment. Could this be what it looks when it all ends? That is exactly what I hope people will take away with my latest project and book called 'The Prelude: The Deadliest City in America.' 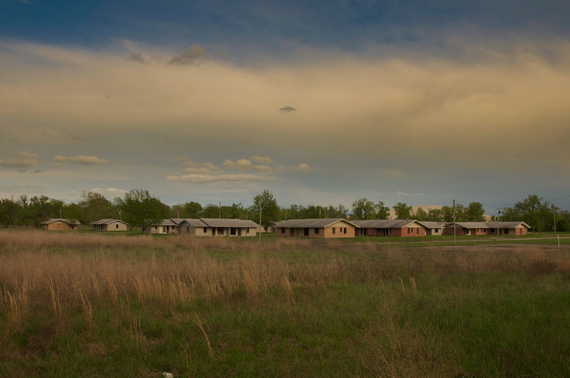 This is America. Geographically and in spirit this is the heart of America. The same thing that built this city in 1947 would ultimately destroy it years later and it's imperative people, not only know that, but see it. I knew if I portrayed the images creatively enough they could have a very deep impact on the viewer.

In 1913, as Oklahoma expanded, lead and zinc ore were discovered and mining began. A town developed overnight around the new work and was named Picher in honor of O. S. Picher, owner of Picher Lead Company. The city was incorporated in 1918, and by 1920, Picher had a population of 9,726. 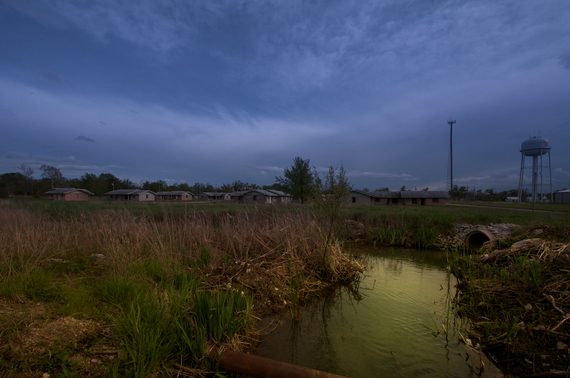 The Picher area became the most productive lead-zinc mining field in Oklahoma, producing over $20 billion worth of ore between 1917 and 1947. More than fifty percent of the lead and zinc metal used during World War I were produced by the Picher district. Mining ceased in 1967 and water pumping from the mines ceased. The contaminated water from some 14,000 abandoned mine shafts, 70 million tons of mine tailings, and 36 million tons of mill sand and sludge remained as a huge environmental cleanup problem. As a result of national legislation to identify and remediate such environmentally hazardous sites, in 1980 the area was designated a Superfund site by the U.S. government. 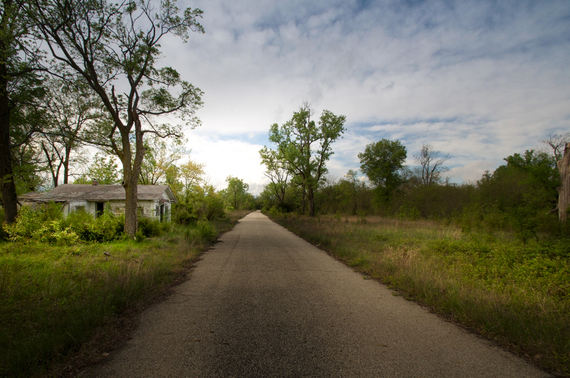 On April 24, 2006 the U.S. government decided to close Picher and relocate its residents. The contamination and other environmental hazards were found to be so severe that the evacuation was mandatory. This was now the most dangerous city in America. The years of mining and the removal of large amounts of subsurface material during mining operations, many of the city's structures have been deemed in imminent danger of caving in now sits an eerie ghost town. 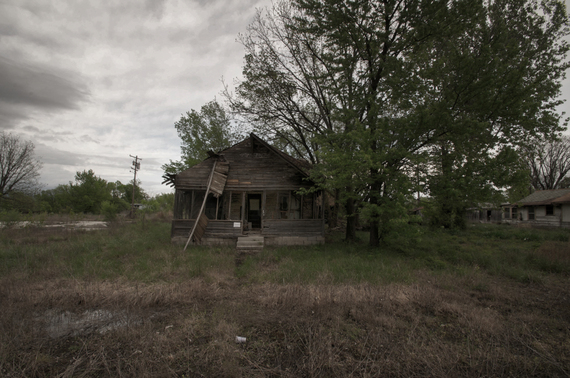 One resident remained in the city after the evacuation refusing to leave. His name was Gary Linderman, the city's pharmacist, who stayed in business providing medicine for surrounding area residents years after. In 2015, I made arrangements to meet Gary Linderman during his visit to Picher and was excited to get the opportunity to interview Linderman, but unfortunately Gary Linderman died days before my arrival. Linderman died on June 6, 2015 after a sudden illness.

I spoke to him several times over the phone and consider him an inspiration to us all. Gary knew the struggle for his town to recover was a daunting task, but he had no misconceptions about that either. He wanted to prove that if he stayed in that city that it meant the city still had a chance of survival. Gary Linderman saw a glimpse of the world ending and he never gave up hope and that is truly inspirational to me. 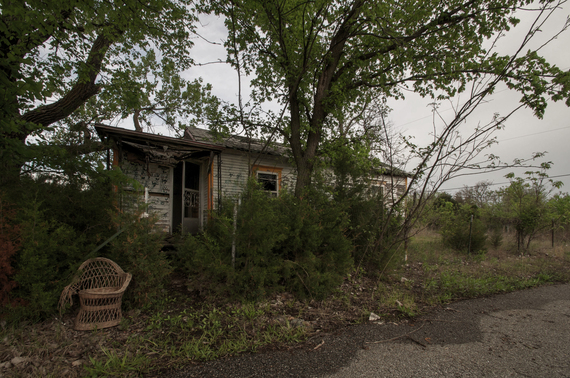 Being in the ghost town is like a scene straight out of an apocalyptic movie. The ground in Picher is so dangerously thin that it could cave in at any moment, so driving into the town wasn't an option. Signs warning the public and road blocks exist, but I took the risk of going inside on foot anyways. 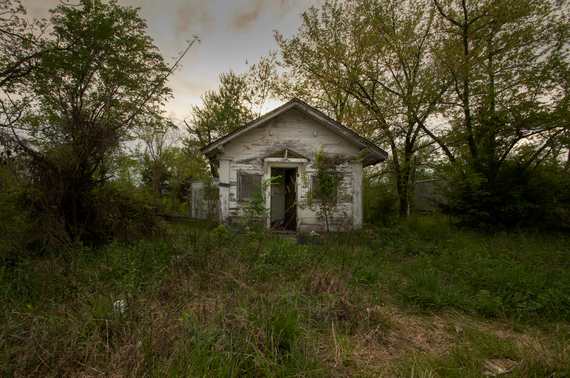 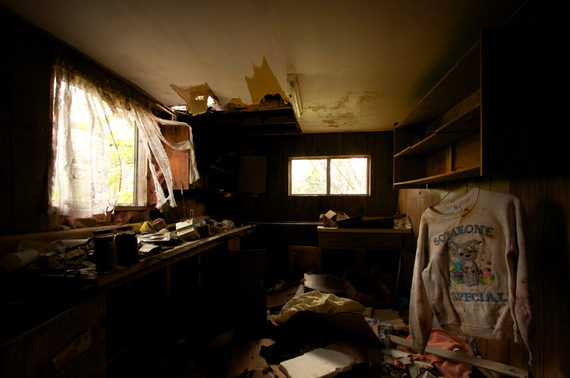 I was terrified. I remember trying to relax my hands because they were shaking so badly. I kept thinking the earth could open up any minute and swallow me and no one would ever know. At one point my foot went through the ground and I fell to the ground thinking I was going to cave in and die. In complete astonishment of the situation, I found myself photographing the hole where my foot went in, realizing later just how chilling that moment really was for me. 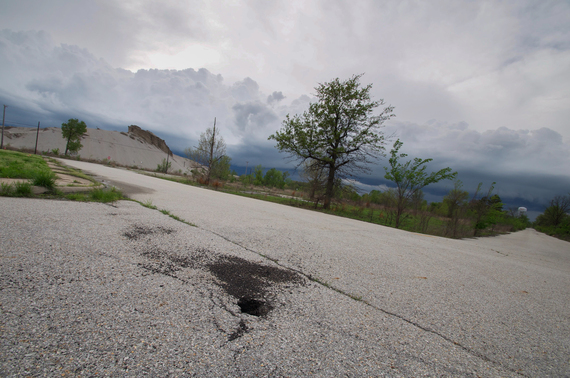 My photographs show large sand piles of a toxic mining material, known as Chat, that surround the town like cryptic mountain ranges. I continued to photograph the rows of abandoned homes, businesses and the sprawling apocalyptic landscape of the ghost town for several hours until a huge storm moved overhead, seemingly out of nowhere. 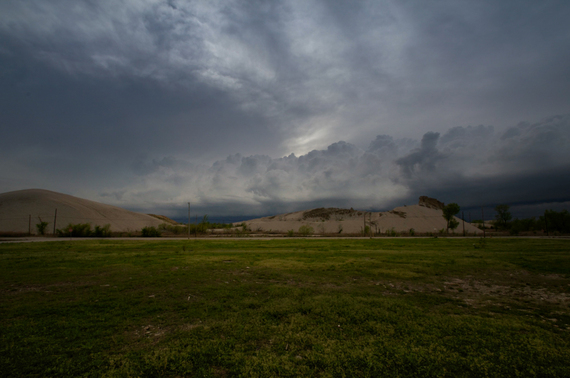 Here I am in this completely surreal environment of being in this eerie ghost town with no people. The grainy sand particles of the toxic chat blowing around hitting me in the face and then I look up and see the largest storm cell I've ever seen in my life and I said to myself this is how it all ends.

I continued to photograph the town but this time including the large storm cell as a dramatic backdrop to the images as I made my way back to my car.

I looked up and just started driving in the opposite direction just to avoid the storm since it was tornado season. I was just going as fast as I could to get away from it. 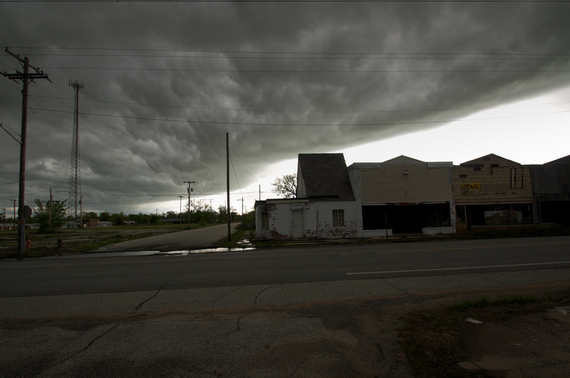 That same storm cell would later produce several tornadoes throughout Oklahoma and Texas that would devastate the region resulting in several floods. 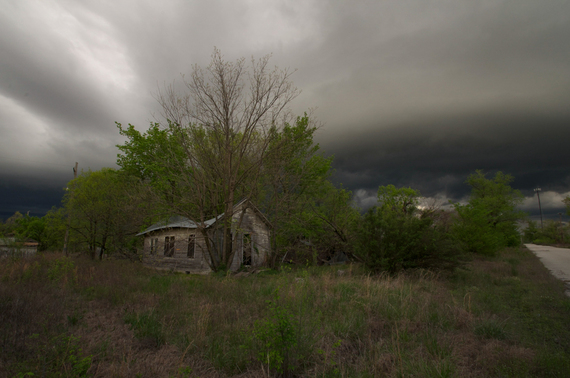 The world may not have ended, but at least on this day it felt that way. Philosophically speaking, I'm pretty sure the world did end that day, and with the death of the last remaining resident, Gary Linderman, I was the last person leaving it all behind.

I believe my images offer a diagnostic to some of the country's true ills and a haunting reminder of how destructive mankind can be.