First, it tells us that -- like most people around the world -- the media plays a vital role in shaping our opinions. As such, with all the negative press the Republican candidate Donald Trump has been getting worldwide, it wasn't really a surprise that he scored so poorly when it comes to popularity, with only 9 percent of respondents saying they would vote for him if they had the opportunity. (Of course, Mr. Trump can only blame his controversial positions and/or actions for the bad press and negative image.)

Now, while Hillary Clinton proved clearly more popular (with 44 percent of respondents opting for her), the real catch in this poll was that an astonishing 47 percent of Arabs said that they wouldn't bother voting for either candidate -- if they had the chance to -- despite an overwhelming majority of them admitting that the outcome of the U.S. election will have a big impact on our region. 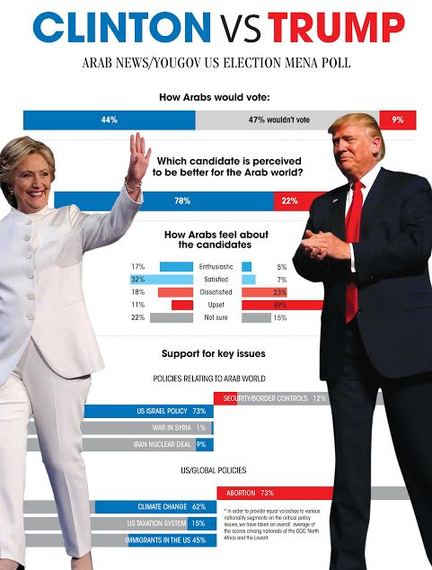 It was also interesting to see that while most respondents didn't favor Trump, many of the same respondents agreed with a number of his policies when asked about them separately. I note here that nearly 89 percent of Arabs were closer to him when it came to topics like prohibiting abortion; more interestingly, 90 percent of respondents said that they didn't mind extra border restrictions or measures if they felt their own country's security was under threat from a certain nationality of group. What happens next? With less than a week until election night, one can't but notice the Arab pessimism that persists toward an event which -- as noted earlier -- will without any doubt have a big effect on us regardless of who ends up winning. Of course, the current mood in the region is the absolute opposite of the overall sentiment back in 2008 when President Barack Obama got elected; and following all the promises and sweet-talk that came during the famous "Cairo Speech."

Now while Obama tried to press hard on difficult issues such as the Israeli-Palestinian conflict, he also took steps which had undoubtedly left the region worse off; namely, failing to act on his own red-line in Syria and the controversial Iran nuclear deal which has left Tehran (which he himself calls a state-sponsor of terror) able to cause more regional upheaval.

In other words, and as veteran Arab-US affairs analyst Hisham Melhem told this newspaper a few days ago -- President Obama "inherited a dysfunctional Middle East from George W. Bush and left a burning Middle East for his successor."

The lesson learnt? Well, I hope that we -- as Arabs -- have learned that actions will always speak louder than words. Yes, Mr. Trump may have said controversial things during his campaign (which contrary to all expectations, won him his party's nomination), but what really matters is what he does if he does make it to the White House.

Similarly, as popular as Clinton is today (although she is definitely not as popular as Obama was in the Arab world back in 2008), what will really count at the end of the day is how will she handle the pressing issues of our region if and when she gets to the Oval Office.

This is something the Israelis learnt a very long time ago and now possess a powerful lobby in Washington, the Iranians also followed suit recently and the nuclear deal was their efforts' first result. For too long, we -- as Arabs -- have relied on personal relations with elected presidents and while that worked for a short while, it is certainly not sustainable. A new president in the White House marks a new start and a new opportunity for us to begin working effectively on grass-roots, congressional and presidential levels. *This article was originally published in Arab News