So it's sunk to this: the leading GOP presidential candidate leads off a nationally televised debate by insisting that he's well endowed. No need to whip it out, Donald. America knows you are a huge dick. 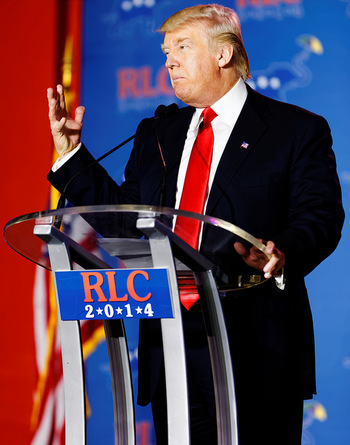 Shocked by the depth of his vulgarity, braggadocio, and scuzz, Republican opinion leaders have converged on a single metaphor: Donald Trump is a cancer on the party.

In the same week that witnessed the spectacle of Mitt Romney, the party's most recent standard bearer, denouncing Trump as a con man, Rick Wilson, a senior GOP political consultant, wrote, "Donald Trump is a hideous cancer on American political life."

Now, I am a science writer, not a political pundit. To my eyes, Donald as tumor is a more apt metaphor than the party leadership might wish to acknowledge.

What is cancer, after all? It's one of our own, gone wild. It has the same DNA as any other cell in our body, but it refuses to play by the rules.

What causes cancer? The answer is complex and not wholly understood, but this much is clear: various toxins can do damage that leads to tumorous growths.

For decades now, the GOP has been inhaling more toxins than the late, lamented Marlboro Man. Given the opportunity to address its base through the echo chamber of Fox News and other rightwing media, the party quickly gave in to the temptation to freebase lies. Addiction to propaganda soon followed.

Even online, there isn't room to catalog them all, but they ranged from the trivial to the monumental. Nothing was too mean-spirited. On the morning of the tsunami that struck Japan's main island, killing thousands of people and causing a catastrophic knockout of the Fukushima nuclear power plant, Fox News ran a crawl asking viewers "Can America Afford to Bail Out Japan?"

This was an absurd question, given that the Obama administration was offering only emergency aid. It would be as if your neighbor's house were on fire, and you ran toward it with a bucketful of water, and someone stopped you to ask, "Can you afford to rebuild that house?"

But that was indeed trivial in comparison with the Big Lies that took hold, lies that few Republican officials would deny. Among them:

* President Obama is a Kenya-born Muslim.

* Climate change is a scam perpetrated by grant-greedy professors.

* Obamacare has robbed people of healthcare.

* The legalization of gay marriage will force all churches to perform them.

* If any gun control measure passes, the federal government will seize all privately held guns.

These are incontrovertibly false, yet they have been mainstays of Republican politics since 2008. The addiction to Big Lies has led to numerous malignancies that the party has reluctantly excised. A choice example: the Todd Akin trope that women can't get pregnant from "legitimate" rape. This one's been in remission for awhile, but just last month it recurred in Idaho.

Then there are the terrible skin lesions of race. Ever since Lee Atwater's success in smearing Democratic presidential candidate Michael Dukakis with the Willie Horton ad, the GOP has relied on racial stereotyping to scare the bejeezus out of working class white voters who might not otherwise have any reason to vote Republican. Donald Trump has merely picked up the ball and run with it (if I may change metaphors for a moment).

In fact, everything that Trump has done comes from the Republican playbook. He's just done it bigger and better -- and more to the point, he's done it to fellow Republicans. No one in the party denounced Trump when he was making outrageous comments about President Obama's birthright citizenship.

Now Mitt Romney, who welcomed Trump's endorsement in 2012, wants to be the party's Surgeon General and cut the tumor out. I sympathize. Cancer's a terrible thing, and the nation needs at least two healthy parties to remain a functioning democracy.

But here's the problem: the cancer metastasized long ago. It's crowding out the truth everywhere. Just look, for example, at the party's hysteria over admitting Syrian refugees (the last entryway a sensible terrorist would use). Just consider that the No. 2 candidate in the GOP presidential race, Ted Cruz, says he would abolish the IRS. An appealing proposal, perhaps, but about as realistic as promising to run a car on nothing but air.

The cure, my friends, is a commitment to truth therapy. We saw glimpses of it in the debate: Chris Wallace of Fox News said, "Mr. Trump, your numbers don't add up" -- and proved his point.

The truth is often messy, sometimes unpleasant, and frequently demands sacrifice from us. Its first demand is this: we have to think critically and disinterestedly about anything a politician says.