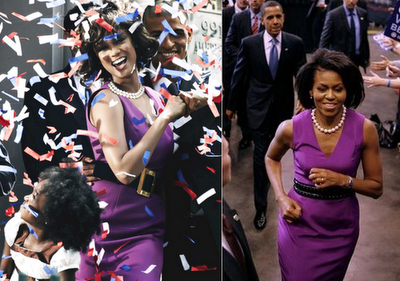 In the current issue of Harper's Bazaar, there's a full fashion editorial featuring Tyra Banks as Michelle Obama. You know, because they have so much in common. Like, they're black. They're both on TV a lot. And they're both...um...let's see...Michelle went to Princeton and Harvard Law School, while Tyra went to...Columbus University in the movie Higher Learning...and...uh...

Anyway, the preposterousness aside of, say, Tyra in a Harvard sweatshirt reading in bed while holding a pencil to her chin, arrested by her own profound thoughts, the concept is pretty clever, don't you think? Let's take a look at other powerful female political figures and their model doppelgangers:

Common traits: Chanel is one-quarter Korean and blowing up in the biz, while Condi makes it her business to keep North Korea from blowing up the world; unusual first names that begin with "C"

Common traits: Lazareanu makes a living because of her bangs, Ginsburg bangs a gavel for a living

Common traits: High cheekbones, dazzling white smiles, being the best in the business (and, frankly, knowing it)

5. Hillary Clinton/Jessica "Marc Jacobs Named a Bag after Me" Stam

Common traits: Being a bit dough-faced, sad-eyed, and like yesterday's news
Voting Made Easy
Register to vote and apply for an absentee ballot today
Register now
More:
Michelle ObamaTyra Banksfashion modelsStyleharper's bazaar
Newsletter Sign Up
An essential daily guide to achieving the good life
Subscribe to our lifestyle email.
Successfully Subscribed!
Realness delivered to your inbox