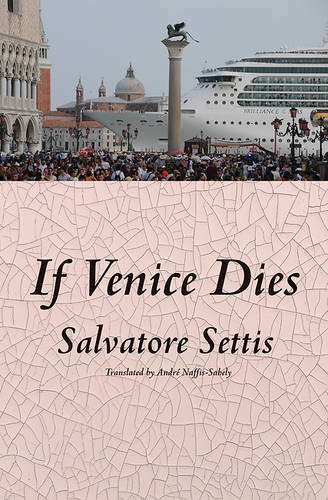 "Once we're done destroying a city's historic center, or a monument, or a cultural institution, will the new structure that replaces them really benefit the community?"

My husband's grandfather was Venetian, and a champion rower. In 1946, when he won the Regata Storica, World War II had recently come to a close, the city of Venice's coffers were empty, and his award was a gondolier's license. At the time, there was little tourism in Venice, and few wealthy families could afford a personal gondolier. Lupo, as he was known, would have preferred a cash prize like those he'd won before the war. However, he set the license aside (decades later it would be handed down to his son and then to my husband) and he continued to toil his farmland in Treporti--a remote lagoon town which today is a 40 minute ferryboat ride from Venice's historical center. Lupo's physical strength, technique, speed, and his livelihood, came from rowing his boat filled with fresh produce that same distance, every day. He knew the best way to sell his produce at a good price was to arrive early, and first. Venice, her islands, her lagoon and her land were Lupo's lifeline.

Lupo often came to mind as I read the studied doomsday sentiments in archeologist and art historian Salvatore Settis' book, If Venice Dies:

"For centuries, the urban margin in the Italian tradition was tied to the concrete experience of the citizen, who as he went back and forth from the countryside, lived it as a slow (and almost imperceptible) transition. The strengths of this natural shift lay in both the admirably sculpted aspect of the landscape, insofar as it was forged by man, as well as in the pronounced compactness of the image of the city, which had to be visible from afar."

If Venice Dies walks the reader through concepts that at times appear as complex as the twists and turns of Venice's calle, and warns against "creative destruction" of historical city centers. Professor Settis reminds the reader that the culture of conservation is a historical fact in Italy, enshrined in its Constitution, and codified into judicial law. That stated, he points to corruption, and the leaders who let 'market forces' dictate their decision making, or lack thereof. Inept or unwilling to limit or strategically manage the millions of tourists that, like invading forces, visit Italy's fragile historical centers each year, past and present leaders appear blind to their citizens' struggle to sustain their human-scale way of life as they watch greengrocers move out and cheap-trinket shops move in.

"Souvenir snapshots--where quantity trumps quality--are a testament to the tourists' ritualistic presence, and not their cultural curiosity. Photographs do not preserve a memory; instead they have replaced our remembrance and our ability to see."

The author indicates that the burdens of mass tourism--cruise ships that tower over Venice like Gulliver over Lilliput, and the "hit-and-run" visitors whose daily numbers triple that of the city's residents--leave little more than wear-and-tear and trash behind. His detailed analysis scolds government administrators whose 'solutions' would be to build a Venetian themed amusement park on an island facing the historical center, a wall of skyscrapers to protect the city from rising sea-levels and tide, and an under-lagoon transit system--all which have since been shelved.

While Settis sustains his concern for uncontrolled tourism, and his disdain for skyscrapers, he may have paused a bit longer on a problem many Venetians believe to be at the front of their city's structural decay: motondoso or the wakes of water that pound the city's fragile centuries-old foundation. Erosion caused not only by large cruise ships passing too close to the historical center, but by the lack of adequate local police control of the hundreds of undisciplined and uncontrolled speeding motorboats that, like buses and automobiles in other cities, carry passengers, supplies and goods around town. A phenomenon that has given motorboats reign in a city built to sustain the gentle wave of passing row boats, like the one Lupo raced to victory down the Grand Canal or rowed to carry his produce to market.

If Venice Dies is a pool of bubbling exasperation, concern, knowledge, cultural ideology, hindsight and foresight that citizens and administrators around the globe should heed, before it's too late.