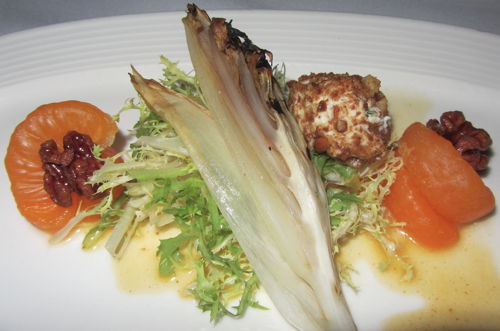 They didn't just land there after floating through the air obligingly. Oh, you knew that. "Walnuts," you retort, "come in hard, heavy, eyeball-sized, sand-colored, smoothly wrinkled shells the shape of swollen hearts."

True. They do. But those hard brown shells aren't what you'd see hanging from walnut trees. In real life, on the branch, walnut shells are sheathed in leathery green hulls, as if trying to disguise themselves as avocadoes. 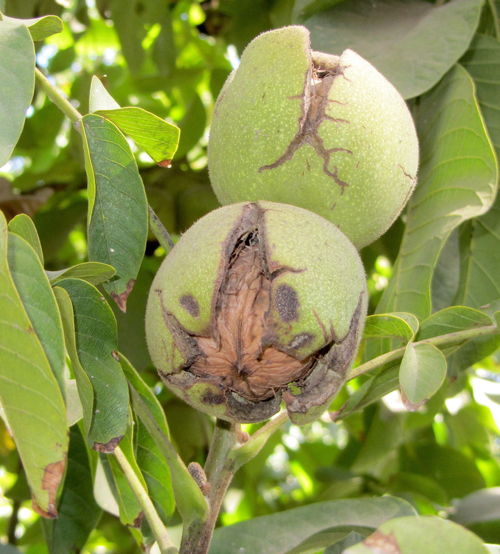 Most of us go our whole walnut-eating lives without ever knowing this. Or knowing that at the very brink of harvest time -- e.g., right this minute, at least in California, which produces 99 percent of the walnuts sold commercially nationwide -- these green hulls split while still in the trees, baring the familiar brown shells. 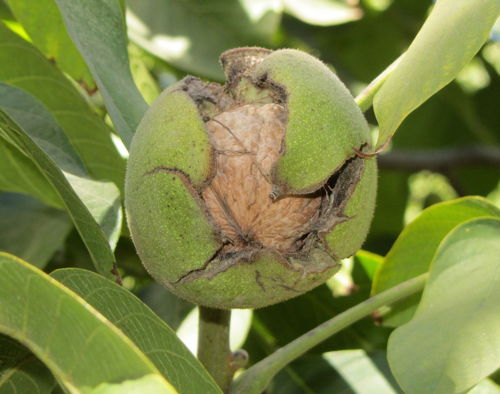 I might never have known this either, despite having been born and raised in the walnut capital of the world, had I not watched the harvest in action last week at Alpine Pacific Nut Company near Ceres, CA. 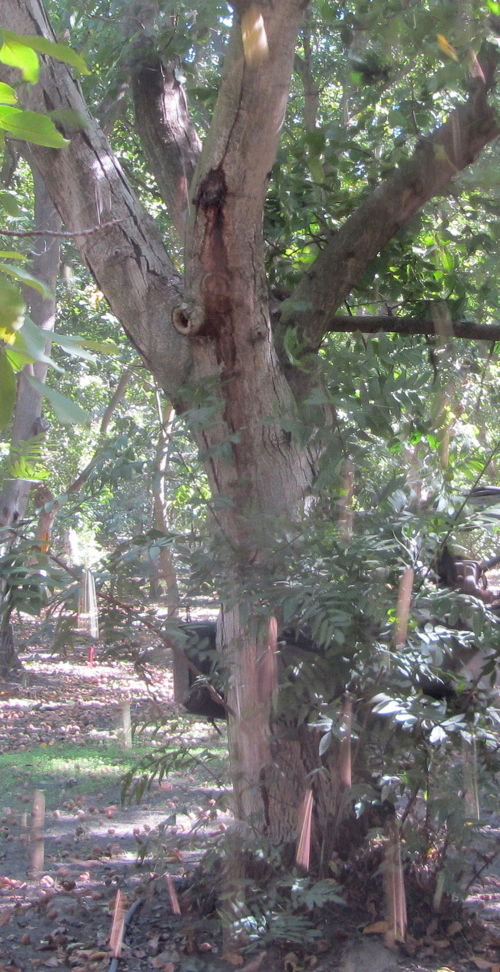 Their long-reaching, lissome boughs rising from short thick trunks, the trees baked under a blastingly hot sun like orderly rows of anguished poets wailing with upraised arms, Why? 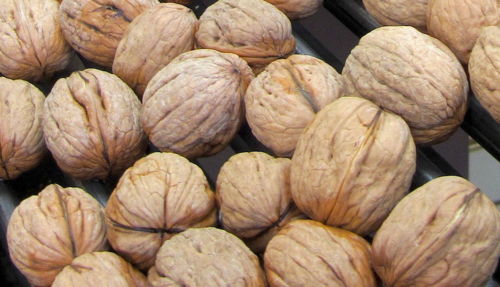 You might say the same thing about oysters. But nature hides each creamy-tender brain-shaped walnut meat within not one but four consecutive layers of protection: papery bitter skins. Fibrous membrane. Hard shell. Leathery sheath. Archeological evidence suggests that human beings have eaten walnuts since at least the Holocene era: How did our prehistoric ancestors deduce what was inside all those layers, which might make it worth banging away at them with rocks?

Later, an expert would unravel this mystery for me. But first, I watched an industrial shaking machine roaring up and down between the rows of trees. 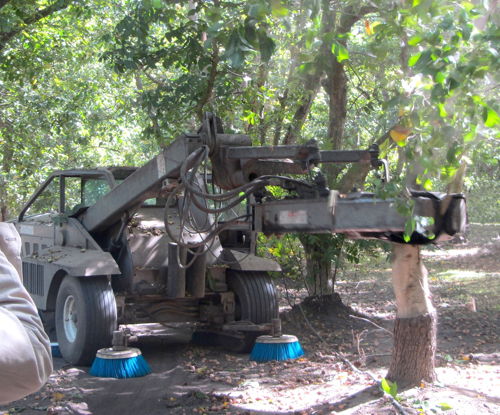 To wrestle tons of nuts from thousands of trees quickly enough to clean and dry them before the meats inside start to mold, big growers such as Alpine Pacific -- which produces some 20,000 tons per year, supplying Costco and other huge companies worldwide -- use mechanical shakers that seize boughs between their massive vibrating "jaws" to send nuts hailing earthward, sounding like an all-castanet orchestra.

The nuts are then swept up by other machines and trucked to hulling-dehydrating facilities such as the one owned by the Keyes Road company in Turlock, CA, where they undergo various procedures to sort, clean and dry them, such as this: 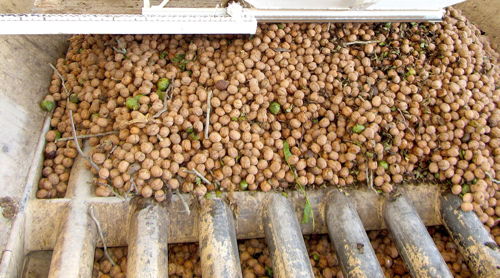 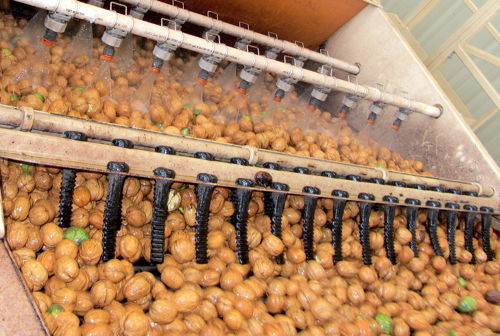 Then they travel to bulk storage and shelling facilities and are sold. Then they go into treats such as this exquisitely velvety walnut soup, created in honor of the walnut harvest by chef Mark Berkner and chef de cuisine James Ablett (who also created the salad depicted above) at Zagat-rated Taste Restaurant in Plymouth, CA ... 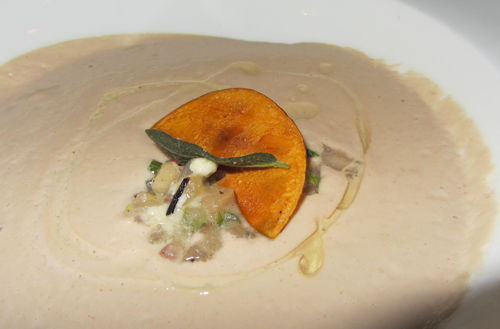 ... and this heavenly caramelized-walnut ice cream, depicted alongside a fruit-nut tart and created in the seasonal spirit by chef-owner Randall Selland and chef John Griffiths at Sacramento's also-Zagat-rated The Kitchen restaurant: 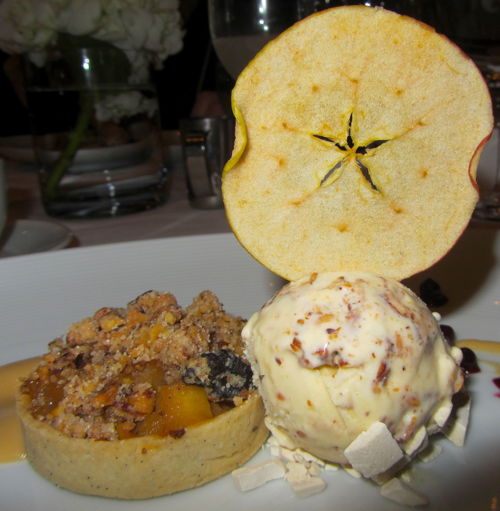 I put my crime-against-nature question to evolution expert Kristan Lawson, author of the award-winning book Darwin and Evolution for Kids.

"When we think of walnuts," Lawson said, "we think of them as something to eat -- whether it's squirrels storing them for winter or us attacking them with nutcrackers.

"Thus the walnut shell and its thick green covering are the protection that keeps a 'baby walnut tree' alive long enough to make more walnut trees. The delicious meat nourishes the germ as it grows on the branch -- comparable to the yolk in an egg." 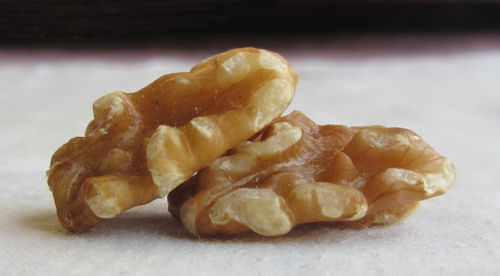 "Trees require very large seeds, because trees are very large organisms," Lawson explained. "Smaller plants such as poppies have such numerous, tiny seeds that they don't need this kind of protection. In nature they just fall undetected, safely, to the earth. Nuts are the seeds of nut trees, and they uniquely need shells.

"It's all about survival of the fittest. Over the millennia, the trees that have been the most successful in nature have been those whose seeds had the hardest, biggest and most protective shells.

"If walnuts had no shells, if their delicious meats just hung on branches unprotected, they would all be gobbled up effortlessly by every passing creature. If that was the case, no walnut meats would survive long enough to reach the ground, germinate and sprout into new trees. If that was the case, walnuts would have become extinct long ago."

In other words: Love the hull. Thank the shell.