Germans are a menace.

Long before there were Nazis, this was the prevailing sentiment in America's heartland. During World War I, patriotic Nebraskans formed "The Council of Defense" and went about intimidating anyone who spoke or published German. Propaganda, like the image below, stoked their righteous rage. 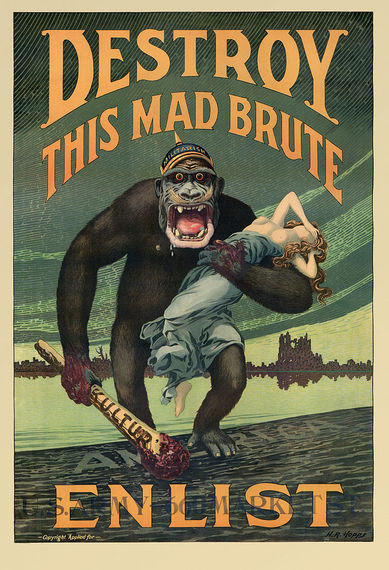 Germany's surrender on Nov. 11, 1918, did nothing to curb their bigotry. Under a banner reading "No German talk in this town," a rural Nebraska mob in tarred and feathered three German-speaking men and threw a rope around the neck of one. In the face of such ugly violence, the state legislature heroically passed a bill ... outlawing the teaching of German to children.

There, in miniature, you have a cause of World War II. Note that I said "a" cause. Hitler and his Nazi henchmen deserve most of the blame, but there can be no denying that the punitive humiliation of Germans and Germany following "the Great War" set the stage for the next one.

So we are Charlie. But is Charlie enlisting for World War III? If so, who is the enemy, and how do we get at him? Those are the hard questions.

Provoked by atrocities in its capital, France has declared a war on Islamist terror, and the United States backs it. Tens of thousands of Germans are marching against Islam in Europe. Don't get me wrong -- I'm all for eliminating the grotesque threat that Islamist violence poses. But, just as we mistook Iraq for al-Qaeda HQ, we risk an even bigger blunder now.

As Kenan Malik rightly observes, jihadis enact nihilist rage. They don't care if their targets are innocent or not. Yet for all their reckless slaughter, jihadis have a clear plan: to provoke us into mistaking all Muslims for terrorists. Already, signs of success are there: revenge attacks on mosques, the swelling ranks of far-right parties in Europe, and a widespread distrust of Muslims in America. Even some intellectuals who should know better are giving in to their darker emotions.

Since the outrages at the Charlie Hebdo offices, Richard Dawkins, a brilliant thinker in his realm of evolutionary biology, has committed himself in a frenzied string of tweets to a fallacy: The attackers claimed to be avenging the Prophet of Islam, therefore Islam causes murderous nihilism. That put him in company with Sen. Lindsey Graham, who hopped onto right-wing radio to insist, "We're in a religious war." The fallacy springs from assuming that Islam (or any other religion) is a unitary and unique causal force. It's not.

Religion is a binding ideology, one that constrains the purely self-interested behaviors we are naturally endowed with. As a powerful force in human affairs, it can be used for a wide variety of ends. The attacks in Paris showed one. Go see Selma to discover another.

Dawkins occasionally tempers his tweets with qualifications, only to undo them: "Of COURSE most Muslims are peaceful. But if someone's killed for what they drew or said or wrote, you KNOW the religion of the killers."

It's startling to see Dawkins stoop to stereotyping. But, after giving himself an inoculation, that's exactly what he does. Allow me to demonstrate. "If an abortion doctor is shot to death, you know the religion of his killer." Sure, we leap to the implied conclusion, but does this mean that Christianity per se causes the murder of abortion doctors? If so, why did George Tiller's fellow parishioners fail to put the good doctor to death?

Indeed, why are all those other Muslims -- more than 99 percent of them -- not rampaging killers? Is their faith too weak? Are they cowards? Nonsense.

Stereotyping, as Dawkins must know, is an evolved trait in humans, one that served our ancestors well in the era when making quick judgments about whether someone was a relation, an ally, or an enemy was a life-or-death skill. In a cosmopolitan, global culture, stereotyping kills. To imply that Islam per se causes terrorism is to commit a deadly error, for then you make an enemy of a billion plus people.

As a secular humanist, I am no cheerleader for Islam -- or any other religion. I recognize that religions are home to benevolence and the most dangerous ideology on Earth -- passionate idealism, the kind of idealism that can use "God's will" to justify any kind of atrocity, from slavery to indiscriminate slaughter. But, as Lenin, Mao, and Hitler proved, religion is not the exclusive home of toxic idealism, nor does any religion uniformly produce it.

I have long argued that a clear dividing line in religion exists: It's not the brand name that counts but the type. The vast majority of believers adhere to mainstream religion and seek three things there: community, moral guidance, and the comforts of ritual and belief. A minority get caught up in what I call Old Time Religion. OTR is authoritarian, reactionary, oppressive, and bent on domination.

Whatever the brand, it is the enemy of civilization. To stymie Islamist and other forms of Old Time Religion while keeping ourselves from sliding into World War III, we need to form a Good Faith Alliance of Muslims, Christians, Jews, Hindus, Buddhists, and, yes, secular humanists. We can join hands around uniting principles as people who stand for tolerance, reason, legal equality, and other modern virtues in one common purpose: to leave a better world for our children. Together, we shall overcome.