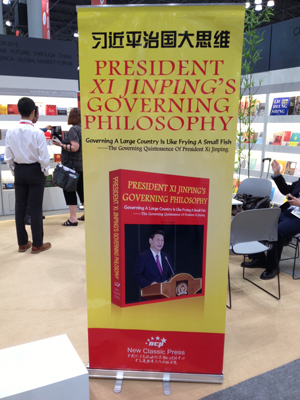 This week, New York City plays host to BookExpo America (BEA), the publishing industry's biggest annual trade show. As authors, publishers and marketers gather by the thousands at the Javits Center, BEA will also honor China as the "Global Market Forum Guest of Honor," bringing a delegation of 500 writers, publishers and Chinese government officials to take part in three days of panels and cultural events.

But this celebration of Chinese literature won't mention the 44-plus writers and journalists who are currently in prison in China, or the many more who have been harassed, threatened and forced into exile. Nor will it talk about China's massive censorship apparatus, which bans or omits references in books, television and films to anything the government doesn't want the Chinese people to know about, like the deadly military crackdown on the 1989 Tiananmen Square protests, the treatment of ethnic minorities and the perspectives of political dissidents, among many other topics.

PEN asked noted China scholar Perry Link, Chancellorial Chair for Innovative Teaching at the University of California-Riverside and Professor Emeritus at Princeton University, to talk about the significance of BEA's focus on China and to decode some of the event descriptions found on the BEA website. The interview forms part of a PEN campaign to tackle censorship and other free expression violations in China -- where the Committee to Protect Journalists documents at least 44 writers are currently in prison.

1. What strikes you when you read the plans for BookExpo America's focus on China?

The main question that comes to my mind is what the American side thinks it's doing. Publishers like to make money, and there are a lot of readers in China, so a commercial motive provides some of the answer. Naïveté, which dies hard in American views of China, can also go part-way in explaining why the top people at major U.S. publishers and even the president of a major U.S. university would agree to speak at an event like this -- "engaging with the other side "-- without looking squarely at the fact that this "other side" harasses and imprisons many of its best writers and intimidates the populace as a whole into self-censorship that distorts public presentation of what Chinese think about their country and the world.

2. The plans to present the Chinese literary market look pretty comprehensive -- anything missing?

Some of the best writers, including Liu Xiaobo, the Nobel Peace Prize Laureate, are in prison. Many others of the best are in exile: Gao Xingjian, Liao Yiwu, Su Xiaokang, Zheng Yi, Ma Jian, and others. Two of the most penetrating contemporary Chinese writers, Ha Jin and Li Yiyun, write in English in order to avoid not only censorship, but the subtle self-censorship that the very language of "the other side" at this book fair imposes.

3. Some of the session topics caught our eye. Why would the Chinese government-sponsored delegation want a session at a literary expo on, for example, the crimes committed to the Chinese people by Japanese militarists?

Since the mid-1980s, the rulers in Beijing have used "hate Japan" as a way to distract the Chinese people from problems inside China and to stimulate nationalism that bolsters support for the Chinese Communist Party (CCP). I'm sure that nothing at the exhibition will point out that about 100 times as many Chinese died in Mao Zedong's Great Leap famine (1959-62) as died at the hands of Japanese at the Nanjing massacre (1937).

4. The event description says that the book on Japanese crimes against the Chinese "provides visually perceptive materials for education in patriotism and safeguarding national interests." What do they mean by that?

The awkward English translation is the kind of thing that can make naïve Westerners view the other side as a bit childlike, even "cute." It is important to see that the other side is not cute or childlike. It is vicious.

Why China's rulers want to bring "education in patriotism" to New York is an interesting question that has two possible answers. The most likely is that the Chinese people who planned the exhibition work inside a power structure where it can be costly to "make mistakes," so they play it safe by trotting out unimpeachable jargon, even if it doesn't quite make sense. The other explanation- - allowing that it is at least possible that there is a sense-making reason -- is that the rulers in Beijing want to target an overseas Chinese audience.

5. Another BEA-featured book is described as showing "irrefutable evidence that China owns sovereignty over these (Diaoyu) islands." Is the sovereignty of those islands in dispute?

Yes. Sovereignty is in dispute between China and Japan. The islands are uninhabited. There may be mineral deposits nearby, but the reason for the event planners to raise this issue is the one I mentioned above: don't "make mistakes" when you go abroad. Your first mistake won't send you to prison, but it could cost a promotion, or even a job -- and anyway, why go down a road that can lead to prison or exile when you can stay inside the machine and turn the wheels for pay?

6. The event description says the book's argument adduces "historical research, linguistics, geography and international jurisprudence." Any idea how convincing the evidence actually is on Chinese sovereignty over those islands?

Bruce Jacobs at Monash University in Australia has studied this question in detail. The reason Beijing pushes the issue has nothing to do with the history of the barren rocks. Its "research" on the question is entirely of the kind where you begin with your conclusion and then set out to show why it is true.

7. The description of the planned launch of a book called "The China Dream" describes this volume as illustrating "that national rejuvenation is the greatest China Dream in modern times by depicting the charismatic Chinese character, the confidence in Chinese path, the re-positioning of China in international relations, and the grand goal and strategy for China's rise." What is the China Dream?

"The China Dream" is Xi Jinping's catch-phrase for his effort to stimulate popular nationalism in support of the CCP. It stresses material welfare, plus pride in the power of the state. When the dream was born, two and a half years ago, Chinese writers and editors at Southern Weekend in Guangzhou pointed out that the dream had a "missing middle": between material comfort (which well-tended animals can have) and pride in how wonderful the Party and the army are, people wanted dignity, respect and rights in daily life. That was the missing middle. Now the very people who took that stand themselves are missing, variously in prison and in exile.

8. What are the Chinese trying to achieve when they schedule an event that "plans to invite Chinese and American celebrities and introduce the English version of 'The China Dream' to western media, to create favorable public opinions about the book and shape its influence"?

Let's not say "the Chinese" are trying this. The majority of the Chinese people care much more about things like the quality of their air or whether they can afford the bribe necessary to get a needed operation for their child than they do about shenanigans in New York. What the CCP leadership is trying to do is persuade naïve American celebrities to cooperate in informercials that will build their soft power. (The Chinese celebrities are a different case; they are not naïve, but have long ago made the calculation that their best interests are served by cooperation.)

9. Another event -- the launch of "Civilisational Repositioning: China's Rise and the Future of the Arab People" -- describes the book as "point[ing] out that Chinese and Arabic civilizations could support each other to realize the Chinese Dream and the Arabic Dream." Does China have its eye on the Gulf?

Reminding us, again, that most of "China" would know nothing about this, the leadership of the CCP most definitely has its eye on the Gulf. The New Silk Road announced by the Xi Jinping government aims primarily in that direction.

10. Is there anything problematic about allowing the Chinese government to choose and frame topics for a conference like this one as they so choose?

What's problematic is that most Western viewers will accept this presentation as "China" and will not see that China is much, much more -- in both quantity and complexity -- than what the CCP wants us to believe.

As the publishing community spotlights China at BookExpo America this week, join PEN in speaking out for China's silenced writers, demanding an end to censorship, and calling for the release of all those imprisoned for their words in China. Under the slogan "Governments Make Bad Editors," PEN's campaign also includes a Shadow Expo during BookExpo America 2015 to counter the aggressive propaganda presented by the state-sponsored delegation in its China-focused events.