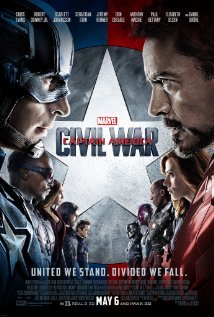 The time has come! Marvel's latest super hero film lands in theaters just in time for summer viewing. Based on the Civil War comic series which pits two favorite characters against each other - Captain America and Iron Man - this film's story unfolds in a two and a half hour epic that, according to our KIDS FIRST! reporters, is worth every minute. KIDS FIRST! Film Critic Brandon C., comments, "I have never had as much of a great time as I had watching Captain America: Civil War. Is that a great amount of hyperbole? Probably yes. But, hear me out." Gerry O. adds, "The length of the film is very long (142 minutes) with many characters and with that Captain America: Civil War still ends up being so far, one of the best films of 2016." Ryan R. concludes with, "The movie Captain America Civil War is finally here and let me tell you, "It is awesome!" I loved watching this movie for its amazing special effects, the high impact action scenes and the acting." See their full reviews below.

Captain America: Civil War can easily be considered an action film, but it doesn't stick to just that. The dramatic plot excites with careful writing and spectacular twists and turns. Of course, there can never be a superhero film without jokes here and there, but they don't push it over the limit and keep the audience entertained.

The length of the film is very long (142 minutes) with many characters and with that Captain America: Civil War still ends up being so far, one of the best films of 2016. 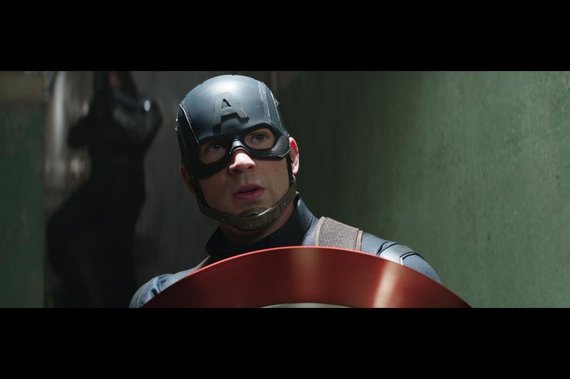 Captain America: Civil War starts off with several Avengers attempting to stop the robbing of a strong bio-weapon. The mission's going well, however, Wanda Maximoff (Elizabeth Olsen) accidentally kills dozens of civilians. The avengers must now sign a document saying that the UN (United Nations) can dictate where and what to do. The event becomes a disaster when a bomb goes off outside their headquarters. The Avengers are now split. Tony Stark/Iron Man (Robert Downey Jr.) agrees to accept whatever the UN has to say and not interfere. Steve Rogers/Captain America (Chris Evans) wants to find the terrorist. Eventually, this split gets worse and worse. To find out who wins, what happens and who ignites the bomb, you need to watch the film.

The length of the film may be one big thing about it that some people will see as negative - two and a half hour run time can be trying. However, it perfectly fits this film. The plot unfolds as very thick, complex and long. To try to squeeze it in a shorter run time would make the story feel rushed and confusing. There are other negatives to this film. Much like Captain America: Winter Soldier, the fight scenes go way too fast. Camera shots are only a split second long in the most intense fight scenes, making it very hard to understand what's going on. On top of that, there are a few plot holes in the film. And then, the viewer comes to the point that defeats all the other negatives: the final fight scenes. These fight scenes between characters combine exciting soundtrack, emotional acting, spectacular visual effects, smooth choreography and more. At times, up to 12 characters fight each other in the same scene and the end result is nothing less than epic!

My favorite scene features one of the fight sequences. It takes place in an airport with so many different superheroes including Black Panther, Spider man, Ant man, Iron Man, Captain America and many more. The feeling the viewer gets from it can only be called pure adrenaline. There many exciting moments in this film, but these perfectly put together fight scenes are easily the most exciting.

The film is not meant for young kids in the slightest. I recommend it to ages 13 through 18. I give it 5 out of 5 stars because, despite a few flaws - dramatic interactions between characters, emotional acting and nothing less than perfect fight scenes easily make up for those flaws.

The movie Captain America Civil War is finally here and let me tell you, "It is awesome!" I loved watching this movie for its amazing special effects, the high impact action scenes and the acting. In this film, the government's political interference regarding the Avengers' activities and the repercussions that happen when they are trying to save lives causes Captain America and Iron Man to take opposing sides. The rift between them forces the other Avengers to choose sides, even though they don't want to. Now are you behind Team Captain America or Team Iron Man?

Actors Chris Evans (Captain America), Robert Downey Jr. (Iron Man), Scarlett Johansson (Black Widow), Elizabeth Olsen (Scarlet Witch), Don Cheadle (War Machine), Sebastian Stan (Winter Soldier), Jeremy Renner (Hawkeye) and Paul Bettany (Vision) all give great performances that are dramatic, witty and comedic when necessary. Not to mention the stellar performances from the two newcomers Chadwick Boseman as Black Panther and Tom Holland as Spiderman. Chadwick Boseman's performance as Black Panther is very regal, strong and makes him one character not to mess with. Tom Holland is an excellent choice for Spiderman. I love how he portrays the character. He is funny, clever and his interactions with Iron Man are great. I can't wait to see the next Spiderman spinoff starring him. I also enjoyed the special effects, which are amazing and, in some instances, just jaw dropping! The character's costumes look fantastic as well. The only characters I missed in this movie were The Hulk and Thor. 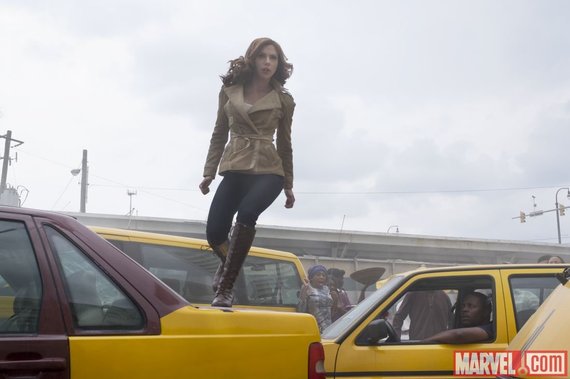 The moral of this film is "don't jump to conclusions." For example, when Bucky is accused of something, everyone in the government tries to kill him. Captain America tries to discover who did it, so he can prove the government wrong. Another moral theme is "vengeance won't make you feel whole and satisfied." One of the Avengers learns this lesson at one point in the movie.

I give this film 5 out of 5 stars and recommend it to people who like action, adventure, comic book-based and comedy movies. I recommend this film to kids ages 9 to18 and I think adults might like this as well. Some scenes may be a little intense for younger audiences. Make sure to see this film, which comes out May 6. 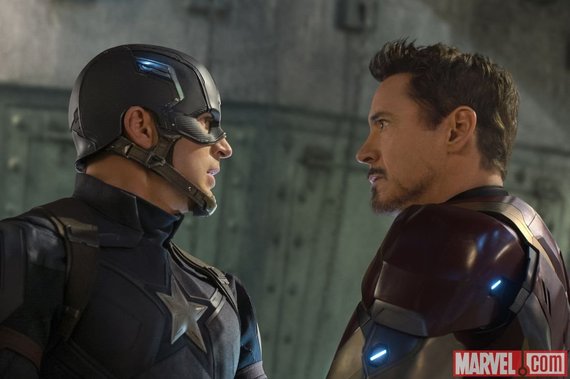 After about eleven years of watching and reading Marvel - from comics to video games to movies to TV shows - I have never had as much of a great time as I had watching Captain America: Civil War. Is that a great amount of hyperbole? Probably yes. But, hear me out. 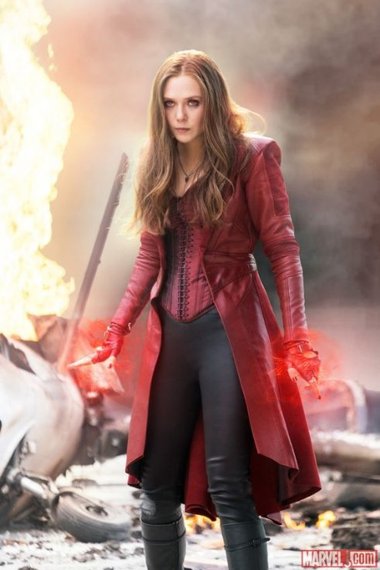 The film's plot revolves around the idea that there have been too many casualties surrounding The Avengers - including their battles in New York, Washington and Sokovia. The United Nations present the remaining superheroes (as Thor and Hulk have disappeared) with a document called the Sokovian Accords, which state that the heroes can do their jobs only when they are told to do so and if they act outside of their boundaries then they will be arrested. Tony Stark and several others agree to sign the document, while Steve Rogers declines to sign. The superheroes form their teams throughout the movie and they eventually clash in a captivating and entertaining battle. 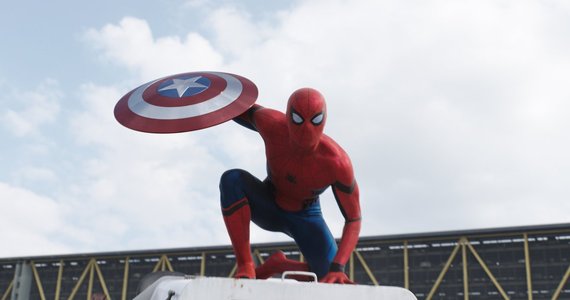 Captain America: Civil War includes the debuts of great characters such as Black Panther (Chadwick Boseman) and the new Spider-Man (Tom Holland). I cannot say enough how incredible of a job Tom Holland does as Spider-Man, as he is just one of the many actors in this film that creates intrigue and entertainment with their characters. As far as the storyline goes, the audience is presented with an excellent conflict which only furthers the anticipation as to who is going to win the battle. With other Marvel films, the good guys face the bad guy(s) and the good guys usually win. While some may get hurt, they usually end up fine at the end. In Captain America: Civil War, the audience does not have that luxury of just siding with "the good guys". Both teams present great points and deliver spectacular dialogue that keeps the audience involved in whatever is going on. 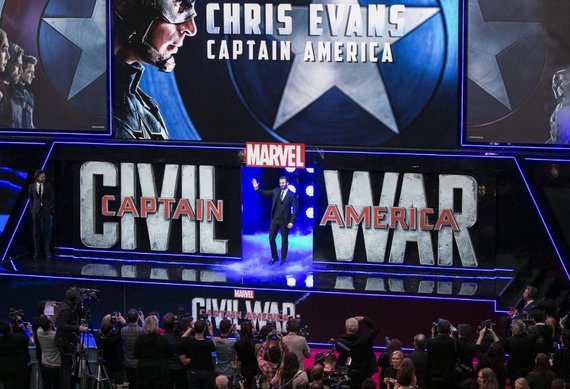 Technically, Marvel Studios proves once again that it knows how to make a film. Everything, from the lighting, to the camera shot variety is darn perfect. While the introduction is a bit messy and hard to follow, it is a minor setback in an otherwise great film. On a personal note, the fight choreography is what stood out for me. I like realistic approaches to stories and films. In Captain America: Civil War, some of the fights feel almost too real as every punch and kick means something. Every blow and action creates a devastating impact that is so compelling you needed to just sit back in awe of what is transpiring.

In conclusion, Captain America: Civil War will get you on the edge of your seats and leave you fully entertained and satisfied. I believe the movie is intended for the other side of 13-year-olds, as the action scenes are very intense and the occasional cursing is rough as well. I give this movie 5 out of 5 Captain America shields because of its brutal fight scenes, beautiful story, flawless visuals and incredible dialogue.