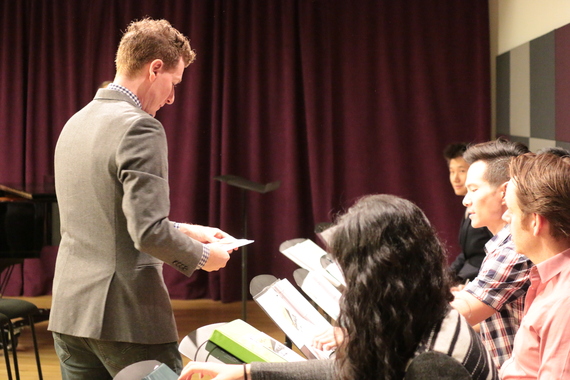 Diversity is the hot topic in the performing arts world right now. From film to stage, there are calls for creating equal opportunity for employment, and for new stories and perspectives to be told. Jasper Grant is the Artistic Director of b-sides productions -- an organization created for artists by artists, whose mission statement is to develop diverse and challenging works and reinvent theatrical tradition. We spoke about the relevancy of musical theatre today, his passion for it and why he is committed to fostering new work.

KM -- Why do you think musical theatre is relevant now, with everything that's happening today in society?

JG -- I feel like people don't find it strange to sing stories anymore; maybe it's because music as a medium has become much more contemporary, hip or urban. I really think that people like Duncan Sheik have allowed that to happen. He made use of this sit-around-the-campfire-and-sing-folk-tales-with-a-guitar style and incorporated truthful storytelling. He made it safe, he made it daring.

There has been a lot of talk of a golden age happening right now in our art form, and I agree. Such good things are being written right now, because people are okay with not being commercial. A lot of off-Broadway houses are giving permission for writers to simply do their piece here, do their piece now. It's inspiring new, smaller theatre companies to take bigger chances. Ten years ago, there was much more pressure on writers to get their show to the next level, a commercial one.

KM -- Why was it important to create the New American Musical Award?

JG -- As you know with a lot of readings/workshops, on the Friday at the end of the week you have an unofficial backers audition when investors come to see if they are interested. There is enormous pressure (especially on the writers) to get it "right" in a short period of time.

We wondered: what if we changed that? What if the writers got (three weeks of) time to write and get their script in front of a true dramaturg, great actors and a director? We could take all the pressure off of them financially etc, so they could figure out what their play really needs.

When we interviewed our finalists last year, the reoccurring story was that they didn't have a safe space to try out their material. Either you get your friends together in a living room, or you get Stephanie Block to do a week reading of it, when it's not ready for that sort of path. We're all about giving opportunity to all artists. If we don't start with the writers, where do we start?

We chose Cost of Living and we brought on John Michael DiResta, who is a fantastic dramaturg, because I felt like these new works needed work with the book. And what's been thrilling with Cost of Living -- I don't know if you know this -- but it won the Richard Rodgers Award this year.

JG -- To know we had a small part in that, that we added our spice in that soup. The sauce in the soup is so good, but now it's been flavored with us. 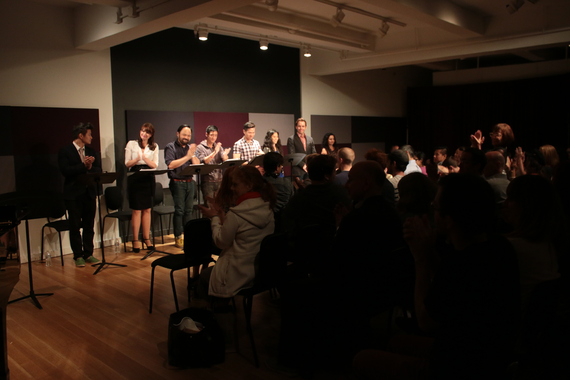 KM -- What do you think audiences need right now?

JG -- I think now, more than ever -- audiences want to be given permission to not think about their lives -- they want two hours to forget about the bills that are due, or the messy break up they are in. I think one of the reasons so many people love theatre is because it is an escape -- art shares things you aren't necessarily brave enough to say yourself, which is pretty powerful.

KM -- I think too, there are all of these contemporary shows that are presenting what are charged topics in society today -- transgender, race etc. People may have mixed emotions about those subjects and do not necessarily know how to relate to or wrap their heads around them.

JG -- Yes, and I feel like we have a responsibility. I think it's quite beautiful that Fun Home is going on tour. How wonderful that a story which unofficially centers around lesbian characters is going to be playing like, Kansas. How beautiful is that -- that the stories that we feel are not general, are becoming general. I'm coaching actors who aren't afraid to dive into shows like Southern Comfort or Fun Home, who want to tackle these big issues because they know how important it is for our society, for our world, to get these stories told. I believe we are truly on the heels of change.

What we loved about Cost of Living was that it was primarily an asian cast. And this is amazing -- we had a heck of a hard time casting it, because there were two asian shows happening on Broadway at the time. Most of the asian actors were working! What a great problem to have.

KM -- What would you say to writers now, who have a very deep personal connection with a story, but aren't sure about bringing it in front of people?

JG -- One of my mantras this year, as a human being is : if you can, you must. If you were given the gift of dance, you have to dance! Why are you denying the world of that gift, when you can make the world a better place by just dancing?

Many people make the mistake of thinking that they have to be "right" for every show written. Well, you're not right for everything. Find the stories that change you and have to be told with your voice; the stories you want to tell. Writers just need to keep writing and they're going to find their audiences. It may take 10 years, but all it takes is one person to latch on and change your trajectory. If you can, you must.