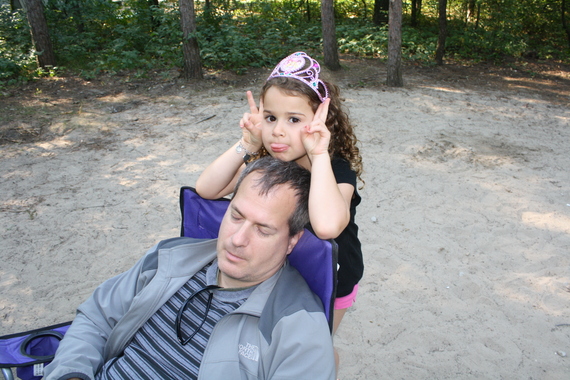 If you give a dad a day,

he'll be so excited about doing what he wants to do.

First, he'll plan to watch a baseball game or two.

Then he'll want to wash his car.

He'll also plan on taking a nice long nap on the couch.

He may even dust off his golf clubs and head to the golf course.

Just as he turns on the TV, your older brother will walk in and ask to watch the game with him.

Seeing the game will remind your brother just how much he loves baseball.

So he'll ask your dad if they can go outside and play catch.

After your dad says "NO" for the one millionth time, he'll finally agree to a quick game so that your brother will stop nagging him.

While they're playing catch, your brother will trip over your bike and spill your bubbles all over the driveway.

Seeing the spilled bubbles will remind your dad that he still wants to wash his car.

So he'll grab the hose and a few clean rags and fill a bucket with warm soapy water.

He may even wash your mom's car too.

When your sister sees the hose it will remind her that she is "totally sweating to death."

So she'll tell your dad that she must have the hose or she will absolutely die from the heat.

After your dad tells her to wait until he's done with the car, she'll put on her best pouty face and beg him to chase her with the hose.

Of course your dad, who is always a sucker for a good pout, will soon abandon his car washing to spray your sister.

But first he'll turn on the radio so he can at least find the score of the game.

As he's trying to find the right station, he'll catch the weather report and hear that it's supposed to storm later.

Hearing the forecast will make him think that washing the car isn't such a good idea.

So he'll spray your sister one more time; but not in the face like you wanted him to.

Then he'll grab his golf clubs and plan to meet his friend at the golf course while it's still sunny.

Just as he gets there, his friend will call and cancel because he now has to take his son to baseball.

Hearing about baseball will remind your dad that he can still probably catch the end of the game if he heads straight home.

Once he gets there, he'll grab a snack and the remote control and get comfortable on the couch.

Five minutes later, when the game is over, your dad will almost fall asleep. Just as he starts to snore, your mom will remind him that he better fix the grill.

She will tell him it's OK to go back to sleep but hearing a hint of sarcasm in her voice, he will reluctantly grab his tool box and spend the next two hours repairing the BBQ.

Finally having a working grill will remind him that he's hungry.

He'll want to ask your mom what's for dinner. But, because she is kind of mad at him for not fixing the grill weeks ago, he'll be too afraid to say anything.

So he'll ask you to check with her about dinner.

Hearing that it's close to dinner will remind your dad that the day is almost over.

If the day is almost done, he's going to need another day.

This post originally appeared on SpecialEv.com along with If You Give a Mom a Moment.

More:
father's dayParenting ParentsfatherhoodDads
Newsletter Sign Up
Raise the kind of person you'd like to know
Subscribe to our parenting newsletter.
Successfully Subscribed!
Realness delivered to your inbox