I don't want to start off with my quibbles about The Golem, which the Lincoln Center Festival is presenting at the Gerald Lynch Theatre through Sunday, because I don't want anything to discourage you from seeing this ingenious and ultimately quite moving show. It's presented by 1927, a decade-old London-based company formed primarily as a collaboration between Suzanne Andrade, a triple threat performer, director and writer, and Paul Barritt, a visual artist who works in animation and illustration and who is doubtless weary of being compared, even if favorably, with Monty Python's Terry Gilliam, but there it is. 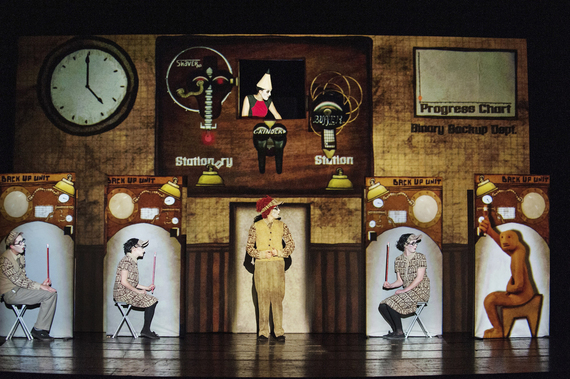 That collaboration -- along with a mesmerizing score composed by Lillian Henley and performed by her and Will Close -- has produced an eye-and ear-filling riff on Der Golem, an early 20th-century serialized tale of a pre-Frankenstein morality fable about a rabbi's solemn attempt to make a creature who could protect Jews from pogroms in the late 16th-century Prague ghetto. Unlike Mary Wollstonecraft Shelley's Monster, the Golem isn't composed of spare body parts, but merely, like Adam, of clay. Why God allows the rabbi to grant the creature the spark of life is anyone's guess, although the lesson of The Golem is similar to that of Frankenstein: Don't mess with the Life Force. After all, we still haven't mastered our own; how can we presume to control it in a creature beyond our control?

Andrade and Barritt have updated the tale. The central figure is Robert (Shamira Taylor), an anonymous cog who works in something called the "binary backup department" of some faceless enterprise whose worker bees are not unlike the women mill workers of Carousel who find release from their numbingly boring lives in the nearby amusement park (a show, now that I think of it, which also has Mittleuropean roots). Instead of a carousel, Robert and his co-workers let loose in a proto-Yoko punk rock band.

Strolling home one night through town (here the animation bristles with humor dark and light), Robert passes by shops that resemble Bleecker Street circa 1970, and comes upon a heretofore unknown business whose merchandise is slave creatures. Robert takes a Golem home (it's an animated, apelike figure, voiced by Ben Whitehead) and soon has it performing mundane duties around the house and at the office.

Inevitably, the Golem gets an update (Golem 2.0) and then another. He evolves from understanding commands to acquiring language, which leads to independence and mayhem. Technology runs amok. It reminded me in places of Elmer Rice's The Adding Machine (1923), on the one hand, and Spike Jonez's Her, on the other. I suppose my quibble is that this Golem is so charming -- I mean the show as much as the creature -- that the ontological tale gets pretty lost. And so the general takeaway -- technology bad, punk-rock good -- seemed kinda banal. Still, the show is a wonder, and here I am, still thinking about it.

Communication, or the lack of it, also figures prominently in Small Mouth Sounds, Bess Wohl's comedy, which has moved from the invaluable Ars Nova to a commercial off-Broadway run at the Signature Center. It's about half a dozen people who have gathered at a country retreat for a week of silence under the tutelage of a guru. They include a yoga-fit married man on the make (Babak Tafti), a lesbian couple (Quincy Tyler Bernstine and Marcia DeBonis) in crisis, a sad sack (Brad Heberlee), a Quiet Man (Max Baker) and a been there, seen it all type (Zoë Winters) irrepressibly sneaking looks at her cell phone or eating junk food.

Wohl has a great time with the idea that these disparate people must co-exist (sometimes in shifting combinations and alliances) without speaking, and the inventive director Rachel Chavkin conducts the proceedings with precision and sensitivity worthy of a Böhm or Maazel.

Wohl can't resist cheating on occasion, when someone or other simply has to speak, but it's her game and I guess she gets to make the rules. And I was disappointed that the heard but unseen guru is a standard-issue charlatan, or at least a bullshit artist of a not particularly high order. Too bad. Nevertheless, the ensemble is spectacular and the 100 minutes fly by.