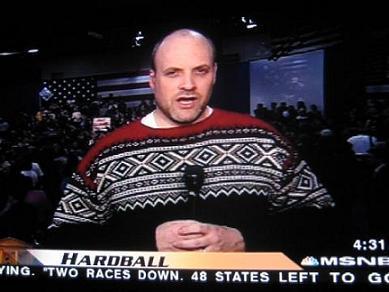 Howard Wolfson, you had a lovely day yesterday, and you gave a lovely and heartfelt speech about it from Hillary Clinton HQ on Tuesday night. That said, I'm confused: Shouldn't a communications manager know better than to wear that sort of...garment...on television? I mean, just because of glare n' stuff, not because it's not fashionable or anything. Or maybe a communications manager knows exactly why wearing that sort of...garment...is a good thing — because, just like J.Lo discovered after the 1999 Grammys, sometimes a certain...garment...can really get you noticed. Suffice it to say that Wolfson's...garment...was noticed by everyone watching MSNBC last night, who double-taked and said, "What the hell was that?" (I got this screengrab from Chris Mathews today, who is himself not exactly a fashion plate, and BriWi mocked it last night. ) Though in truth the pattern does give him a certain broad-shouldered barrel-chested burly cross-country skier vibe. Actually, funnily enough though it really does seem like a wildly inappropriate...garment...for Wolfson, I can totally see that sweater on Mitt Romney. Or on Ron Paul, with a pair of big fuzzy earmuffs. Cute! Dennis Kucinich and his wife would probably both squeeze in there, just to be close as possible.