Imagine being paralyzed: whatever position you are in right now, you must stay there-- until someone comes to move you.

As an American, the chances of you becoming paralyzed are roughly one in fifty.

With a U.S. population of 315 million, an estimated 5.6 million children and adults suffer paralysis. That's 1.7 percent of America's population, members of your family and mine.

One is my cousin, R--, who recently incurred a nerve condition called Guillain-Barré syndrome . He was paralyzed in hands and legs, but fortunately had the good sense to get to a physician immediately. GB can be fatal, if the chest cannot rise so the lungs inhale; the paralysis it brings can also be permanent, but generally it is not. GB affects the outer nervous system (peripheral) not the brain and spine. My cousin, if all goes well, should recover fully in one to six months.

My son Roman Reed became paralyzed with a spinal cord injury during a 1994 college football accident. His condition is considered permanent -- but not by everyone.

Roman is not waiting around. He may require assistance to get out of bed in the morning, but once he is up, he is moving, fighting, working to develop a cure for paralysis.

Right now, a California bill called AB 714 is being proposed by Assemblyman Bob Wieckowski (D-Fremont) -- to raise $2 million a year for paralysis cure research -- restoring funding to the Roman Reed Spinal Cord Injury Research program. The first hearing was held on April 16, in the Health Committee at the State Capitol, Sacramento, and it passed 16-2.

The next hearing will be on May 1 at 9 a.m. in the Appropriations Committee, and that will be much tougher. We may win or lose by a single vote.

Want to help? Send a FAX message (or e-mail, but fax is better) to the chair and vice chair of the committee, tell them you strongly support AB 714.

What kind of scientists will receive grants, if AB 714 becomes law?

Hans Keirstead and Mark Tuszynski are world leaders in paralysis cure research. Both have received grants from the Roman Reed program in the past, small grants which led to larger ones from institutions like the National Institutes for Health (NIH), the Christopher and Dana Reeve Foundation, and the magnificent California stem cell program.

The two men are very different. Tuszynski is quieter, preferring to focus on the science. 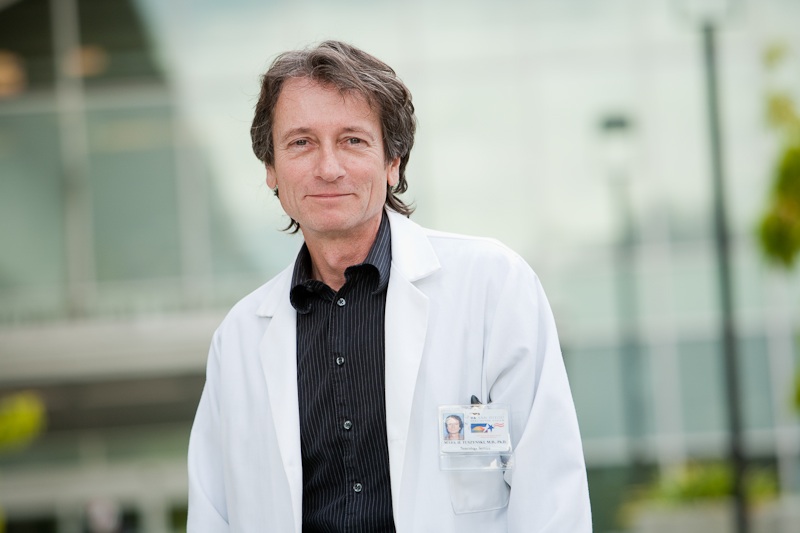 Dr. T. admits he was a skeptic about using stem cells to replace nerves lost after spinal cord injury.

"I did not think it would have much of an impact," he said, "because of the difficulty in growing axons through the injured spinal cord, and the complexity of neural brain circuits. How would stem cells navigate through the maze of the spinal cord?"

Tuszynski's opinion changed after his group started working on neural (nerve) stem cells, at the urging of a paraplegic scientist, Paul Lu, in his center for neural repair at UCSD.

"We tagged the nervous system-derived stem cells with a green fluorescent marker, which allowed us to track the cells after putting them into the spine," he said.

"To keep the cells from washing out of the spinal cord, we embedded them in a gel. Finally, we added proteins, to stimulate the cells' survival.

"To our astonishment, the grafted nerve cells extended new connections (axons) over long distances, some nearly the entire length of the spinal cord."

It is amazing to see. Usually, when a non-scientist like myself looks at a photograph of a damaged spine, it is hard to tell what is going on. A v-shaped gap in the spinal column, a little tentative fuzz which might or might not be new growth -- hard to get excited.

This was different. At a recent meeting of the California stem cell program, the audience
gasped at the micro-photograph of green-marked nerves leaping across the gap in the injured spinal cord, reconnecting on the other side. The new nerve cells were marked with green, so you could follow the growth -- it was like the whole spine was slathered with lime green paint.

And what did it mean, in practical terms, was there any recovered motion?

"Injured rats with completely severed spinal cords recovered significant motion, including the ability to move every joint of their limbs..." said Dr. Tuszynski, "But they still could not support their weight on their legs. So there is still room for improvement."

But Tuszynski and his colleagues are moving forward to test the procedure on non-human primates at UC Davis. Success or failure there will determine if the approach is brought to human trials...

"Chronic", he said. That is a huge word to a paralyzed person. It means permanent, i.e. anyone who has been paralyzed more than a couple of weeks, and is likely to remain so. Most experiments are done with new injuries, called acute. These may recover to an extent on their own, so it is hard to tell if a treatment worked or not. But if improvement is gained for a chronic patient, who has been paralyzed over time, that is success.

And the second scientist? Dr. Hans Keirstead is an outgoing individual who loves to fly his own helicopter -- and is a master of the world of business.

Famous for his use of stem cells to re-insulate damaged spinal nerves, an approach which Geron Inc. took all the way to human trials, (canceled for financial reasons, the tests were successful in their purpose, to test for safety), Keirstead also did pioneering work with an injectable protein called IP-10. He states that, "The treatment showed strong efficacy in Phase 2 clinical testing in humans with ulcerative colitis and rheumatoid arthritis. It is anticipated that the treatment will be used 'off label' for Spinal Cord Injury and other diseases and injuries of the nervous system."

Working with his father, Hans built hospitals in Africa, distributing 600 wheelchairs and several tons of multi-vitamins. His stem cell expertise involves him in many endeavors, including human trials of a way to fight cancer. ("Not my invention," he hastens to add, 'The approach was invented by Dr. Robert Dillman of Hoag Hospital. I led the scale-up of the manufacturing, and the commercialization of the program.") Presently he is attacking the problem of the spinal cord scar, which develops at the injury, and blocks the messages between brain and body.

Why did spinal cord injury call to him?

Keirstead is attacking paralysis from four directions: to reduce the damage from the body's reaction to new injuries; attempting to eliminate the spinal cord scar to allow nerve communication between brain and body; reinsulating of damaged nerves in the spinal cord; and the development of the motor neurons, great long nerves which stretch from spinal cord to muscle.

These are scientists the Roman Reed Spinal Cord Injury Research Act has funded in the past, and may again if AB 714 (Wieckowski, D-Fremont) becomes law.

And if their research is not funded, so that paralysis continues, uncured?

A paralyzed person faces lifetime medical costs of one to five million dollars.

A single individual's medical care could cost more than the entire annual funding of the program to end paralysis.

Cure -- or the unending expense of lifetime care -- that is our decision.