For Liberty, a documentary
of the Ron Paul grassroots movement, deserves attention. Ron Paul enthusiasts will recognize familiar names and faces and relive
unforgettable moments, and students of elections, campaign managers and
political activists of all persuasions should see it. Everyone
concerned with the direction of the country and the breakdown of
political discourse would find something moving. The seeds of this
grassroots movement are still growing.

One Amazon customer review
lauds, "this movie simply and eloquently captured the passions of an
unlikely coalition of people from all across the political spectrum who
quickly came together in response to a uniquely American message, and
who unexpectedly, enthusiastically and sometimes haphazardly ended up
immersing themselves entirely in a political campaign." Why then did
the campaign do so poorly? "The grassroots felt [the official campaign
staff] were at best incompetent" protested
Adam de Angeli of the Campaign for Liberty, the remnant of the official
presidential campaign on which he worked. He then doth protested too
much defending the failures of the official campaign in a documentary
about the grassroots. Incoherently, de Angeli criticizes the
documentary for avoiding examining mistakes while still harboring
delusions that the official Ron Paul presidential campaign brought
"hundreds" of Republican National Convention delegates in its fight for
the nomination (Green Papers shows Ron Paul winning only 20 of 2,380 delegates with 15 final votes).

This
movie puts faces on the people demanding a radical change towards a
more moderate government. Ross Perot mined this good government vein
in his two presidential bids with a call to put our own house in order
before promising new grandiosities and foreign interventionism. About
two-thirds of Americans are angry at government solutions and do not
think either party has the answers according to a recent Rasmussen poll. Recently Joe Scarborough
revisited a 2003 economic prediction from his guest Ron Paul that
warned that if we were to continue to inflate this bubble we would have
our housing crisis with damage world-wide; Arianna Huffington went out
of her way to agree with Dr. Paul.

People now protesting against the bailouts, out of control
government
spending and out of touch politicians in both parties
show the movement has grown beyond the Ron Paul "r3volution." A few
hundred thousand people, by my best estimates, recently converged on
the Capitol for the Tea Party protests. David Brooks explains these Jeffersonian roots. In my unscientific poll of the
9/12 Tea Party protesters, few recognized Ron Paul's name and nearly
all of those who did were dismissive or expressed a highly negative
reaction.

Two years ago, my friend Nicholas Sanchez prophetically remarked,
"This political train-wreck Republicans face can largely be traced to
Bush’s philosophical metamorphosis from a traditional,
non-interventionist conservative to the neoconservatives’ exemplar of a
'War President', and his positioning of the Republicans as the 'War
Party'." In fact, polls and other indicators increasingly show both a
resurgence of conservatism as well as disillusionment with the
Republican Party. After Dr. Paul warned the party has lost its way,
the Republicans suffered a crushing defeat. Support for foreign wars has since plummeted to an all-time low says CNN.

For Liberty: How the Ron Paul Revolution Watered the Withered Tree of Liberty
introduces us to the people who decide elections and the future of the
country--not just the activists but the swing voters. A 2006 study
by David Boaz and David Kirby found that about a fifth of voters hold
generally libertarian views. Grover Norquist labels it the "leave us alone" coalition. The pieces of a political realignment
waiting to happen are wonderfully edited on screen. As Ron Paul
demurred, "it was the message not the man": liberty is popular and the
constitution brings us together.

With a third of the country behind one of the two major parties, For Liberty examines
the people standing in the middle who decide elections. Those who want
to win over increasingly discriminating voters in 2010 and 2012 should
study this movie. As one woman in the film explains, the more they talk with their
neighbors the more they find they agree. The Rovian approach of divide
and conquer loses in the end. For Liberty beautifully shows us what Markos Mousitlas called the only true people-powered campaign in 2008. 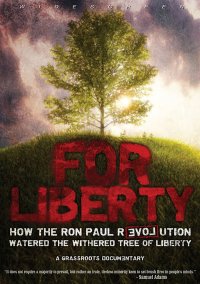