There's a moment of peace for me here right at the Domodedovo Airport in Moscow, as the hypnotic hum of the air conditioner and blanket of the sound sealed windows briefly block the chaos outside. The movie I've come to work on, an alien apocalyptic thriller called The Darkest Hour, decided no more than forty‐eight hours ago to halt production for a minimum of two weeks. The reason for this is a common clause in the world of contracts: force majeure, an "act of God" that is unforeseeable and out of the control of the parties involved. A hurricane, a tornado, flooding -- or in this case, devastating fires that have wreaked havoc across Mother Russia. 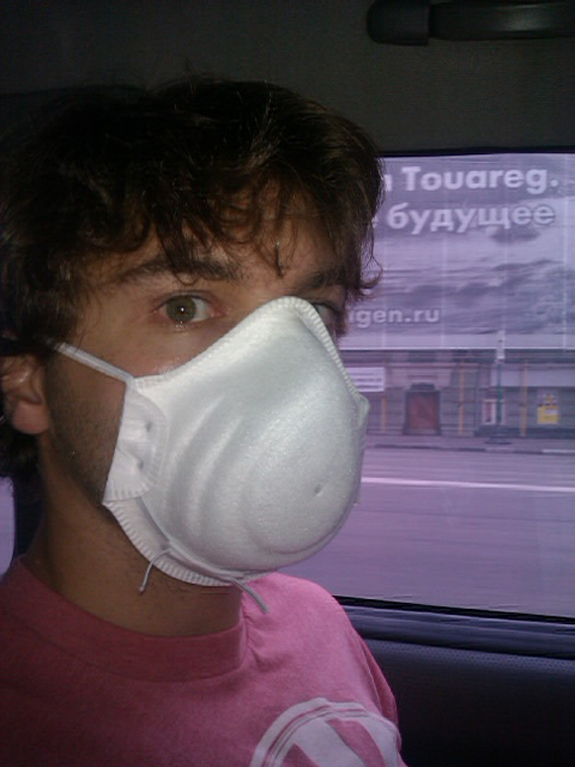 Since I landed here, almost exactly one month ago, Russia has been suffering through a record heat wave. Easily eclipsing the old Moscow heat record of 98 degrees registered in 1936, temperatures have now risen above 100. For a city that normally has summer temperatures sitting at an easy medium of the low- to mid-70s, this is an unbearable burden upon the millions of people living here. The Kremlin is now directly addressing the issue of climate change head on. President Dmitry Medvedev has posted a speech in English on the Kremlin's website:

Everyone is talking about climate change now... Unfortunately, what is happening now in our central regions is evidence of this climate change, because we have never in our history faced such weather conditions in the past. This means that we need to change the way we work, change the methods that we used in the past.

And not just the way they work, but also the way they try to cool off from the heat wave itself; the number of drownings -- mainly in unguarded areas of the Moscow River, and many under the influence of alcohol -- has passed 2,000. As of now, the average mortality rate in Moscow has doubled from its average to 700 per day. As if the sweltering, oppressive roast of the heat wasn't enough, enter the fires. All across Russia fires have been ignited in peat bogs, or underground marshes, many of which have dried up in the past decades, making them extremely susceptible to combustion. With hundreds springing up per day across Russia -- some of them even as close as forty kilometers outside Moscow -- the country is under the merciless siege of a natural disaster. The fires right now in Russia cover over 420,100 acres, and as of this writing over 500 individual fires are still burning. 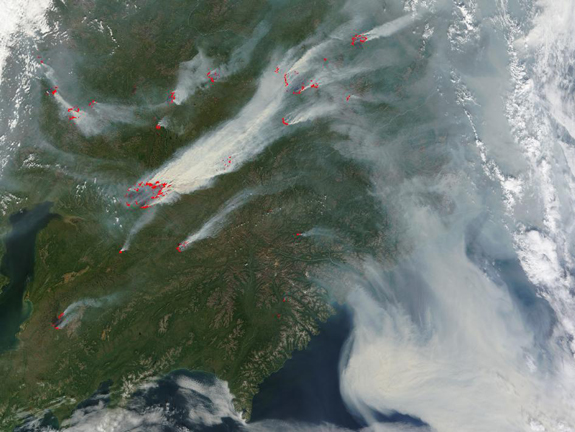 The resulting plume of smoke is said to be as long as the distance between Chicago and Los Angeles. Carbon monoxide levels were six times the maximum acceptable levels on Saturday, and tiny air pollutant particles in the smoke have seeped into every corner of the city, stinging eyes lungs, even as deep as the Moscow subway system, which is one of the deepest in the world. Even going outside at this point for one hour is the pollutant equivalent of smoking two packs of cigarettes. One can't help but feel pity for -- or conversely, admire -- the way so many of the Russians on the street still briskly walk, fiercely puffing on a cigarette with an indomitable shade of defiance on their face. These people are tough.

People have been told to stay indoors and avoid physical activities (in my case that includes running from aliens) for as long as they can, a recommendation that for many people in Russia just doesn't seem an option, as cars still fill the road in a chokehold with heavy traffic, most of which can barely be seen more than a hundred meters ahead. There's no knowing exactly when the smog will dissipate; maybe when it rains, or when the winds kick up, neither of which there is predicted to be much of in the next coming weeks. The people are being choked, having to simply brace themselves, an extremely difficult task when the subject of the actual air you breathe is breached. The government has recently opened up 123 air conditioned rooms, in hospitals and government buildings, among other places, that people can come to for a safe haven, or at least a break from the acrid air outside.

Our last day of work was on Saturday, the apex yet of concentration levels of carbon monoxide and low visibility. Wearing my gas mask that probably was more adept at preventing woodchips from being inhaled, I stepped out of my room at the Hotel Pokrovka and looked down the hallway, where a silver haze of smoke lingered all the way down the corridor. It was an eerie feeling that I won't soon forget. Outside, the smoke had become so dense that driving to our lot (we had very fortunately those last few days been shooting interiors) felt more ominous and unpredictable and just plain unknown than any workday I've ever experienced. The usual band of nicotine addicts -- huddled into their corner of the studio as always -- was much smaller than normal. Gas masks hung below their faces around their necks, eyes now jumpy and sleep deprived.

In the middle of shooting a scene where my fellow thespians and I were contemplating the safety of leaving our underground bunker and facing the alien infested apocalyptic world of Moscow above us, our producer called the cast and crew together for an emergency meeting. We would in fact be shutting down in the next forty‐eight hours, and many of us would soon be lucky enough to be flying to other places in the world, none of which was blanketed by smog. I felt a surge of relief to be escaping the scorching gray days of the past weeks, but as I looked around to my fellow workers on the film, all I could feel was concern for them. What will happen in the next couple weeks? Most of the 16 millon people of Moscow and the countryside surrounding it can't simply be generously put on a jet like me by a powerful corporation and flown across the world to a home of safety and fresh air. Most of the people will have to stay.

May we in return have them stay in our thoughts and hearts through this disaster. And let us not forget what we may all be partially responsible for--the accelerated climate change of our fragile planet.