Can a strong urge to urinate impair your ability to drive? Is yawning contagious? Will motorists stop double-parking if you threaten to flatten their cars with an armored tank?

The studies of these subjects might not win you a Nobel Prize. But they might win you an Ig Nobel -- an award given to research that makes you laugh -- and may even somehow benefit society.

"You probably wouldn't think the need to urinate can impair you as much as being legally intoxicated," said neurology professor Peter Snyder of Brown University, co-author of "The Effect of Acute Increase in Urge to Void on Cognitive Function in Healthy Adults."

His work -- based on giving human Guinea pigs a glass of water every 15 minutes and testing their brain functions -- suggests that bar-goers should go to the bathroom before deciding if they're in any condition to get behind a wheel.

Past winners have been honored for studying, among other things, why toast falling off the breakfast table tends to land butter-side down.

Winners include Peter Barss of McGill University, author of the medical report "Injuries Due to Falling Coconuts"; George and Charlotte Blonsky, who invented a device to help women give birth by spinning them at high speed; and the British Standards Institution, for publishing a six-page document specifying the proper way to make a cup of tea.

Seven of the ten new winners journeyed to Harvard -- at their own expense -- to accept their prizes.

Several past Ig Nobel Prize winners are to return to take a bow and, in one case, swallow a sword: Don Featherstone (1996 art prize, for creating the plastic pink flamingo lawn ornament), Dan Meyer (2007 medicine prize, for co-authoring the medical study "Sword Swallowing and Its Side Effects"), Deborah Anderson (2009 chemistry prize for testing whether Coca-Cola is an effective spermicide), and Hyuk Ho Kwon (1999 for inventing the self-perfuming business suit).

As he does every year, Marc Abrahams, master of ceremonies (and editor of the Annals of Improbable Research), will close the ceremony with the traditional, "If you didn't win an Ig Nobel prize tonight -- and especially if you did -- better luck next year."

CHEMISTRY PRIZE
Makoto Imai, Naoki Urushihata, Hideki Tanemura, Yukinobu Tajima, Hideaki Goto, Koichiro Mizoguchi and Junichi Murakami of JAPAN, for determining the ideal density of airborne wasabi (pungent horseradish) to awaken sleeping people in case of a fire or other emergency, and for applying this knowledge to invent the wasabi alarm.
REFERENCE: US patent application 2010/0308995 A1. Filing date: Feb 5, 2009.

MEDICINE PRIZE
Mirjam Tuk (of THE NETHERLANDS and the UK), Debra Trampe (of THE NETHERLANDS) and Luk Warlop (of BELGIUM). and jointly to Matthew Lewis, Peter Snyder and Robert Feldman (of the USA), Robert Pietrzak, David Darby, and Paul Maruff (of AUSTRALIA) for demonstrating that people make better decisions about some kinds of things — but worse decisions about other kinds of things‚ when they have a strong urge to urinate.
REFERENCE: "Inhibitory spillover: Increased Urination Urgency Facilitates Impulse Control in Unrelated Domains," Mirjam A. Tuk, Debra Trampe and Luk Warlop, Psychological Science, vol. 22, no. 5, May 2011, pp. 627-633.

PSYCHOLOGY PRIZE
Karl Halvor Teigen of the University of Oslo, NORWAY, for trying to understand why, in everyday life, people sigh.
REFERENCE: "Is a Sigh 'Just a Sigh'? Sighs as Emotional Signals and Responses to a Difficult Task," Karl Halvor Teigen, Scandinavian Journal of Psychology, vol. 49, no. 1, 2008, pp. 49–57.

BIOLOGY PRIZE
Darryl Gwynne (of CANADA and AUSTRALIA and the USA) and David Rentz (of AUSTRALIA and the USA) for discovering that a certain kind of beetle mates with a certain kind of Australian beer bottle.
REFERENCE: "Beetles on the Bottle: Male Buprestids Mistake Stubbies for Females (Coleoptera)," D.T. Gwynne, and D.C.F. Rentz, Journal of the Australian Entomological Society, vol. 22, 1983, pp. 79-80.
REFERENCE: "Beetles on the Bottle," D.T. Gwynne and D.C.F. Rentz, Antenna: Proceedings (A) of the Royal Entomological Society London, vol. 8, no. 3, 1984, pp. 116-7.

PEACE PRIZE
Arturas Zuokas, the mayor of Vilnius, LITHUANIA, for demonstrating that the problem of illegally parked luxury cars can be solved by running them over with an armored tank.
VIDEO
OFFICIAL CITY INFO

PUBLIC SAFETY PRIZE
John Senders of the University of Toronto, CANADA, for conducting a series of safety experiments in which a person drives an automobile on a major highway while a visor repeatedly flaps down over his face, blinding him.
REFERENCE: "The Attentional Demand of Automobile Driving," John W. Senders, et al., Highway Research Record, vol. 195, 1967, pp. 15-33.
VIDEO 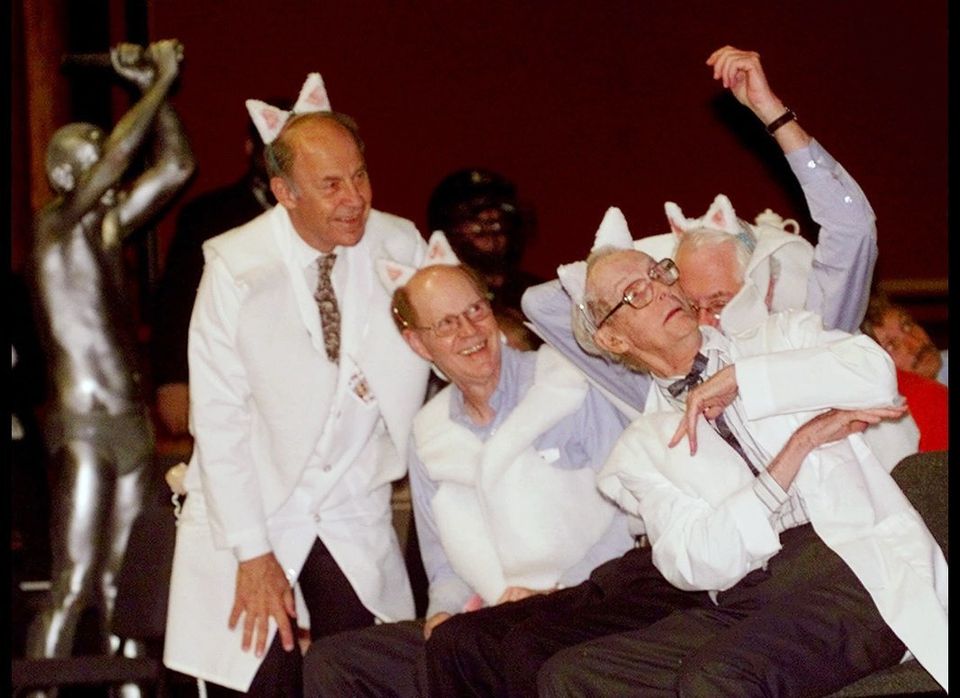