CAMBRIDGE, Mass. — Amid a flurry of paper airplanes, hosts adorned with little more than silver body paint, and the world's first and only opera about a centrifugal-force birthing machine, the 2013 Ig Nobel Prizes were awarded tonight (Sept. 12).

The Ig Nobels, which are awarded each year in the historic Sanders Theater on the Harvard University campus, honor scientific research that makes people laugh, then makes them think — and then makes them laugh again. The science is real, and though it's been published in prestigious, peer-reviewed academic journals, it all has considerable popular appeal.

Who hasn't wondered, for example, about the effect that opera music might have on mice after they've had a heart transplant? (It helps, apparently.) And who among us, when seeing an amputated penis — after it's been partially gnawed on by a duck — hasn't asked, "Hey, is there a surgical technique that can help here?" (Answer: No, there isn't.) [The 10 Winners of the Ig Nobel Awards of 2013]

The Joint Prize in Biology and Astronomy Prize went to a team for their celestial discovery that lost dung beetles find their way home by looking at the Milky Way, that is, after they do a little jig on their perfectly rolled balls of poo. Physicists snagged an Ig Nobel for figuring out that walking on water is possible, if the water walker and the water are located on the moon. 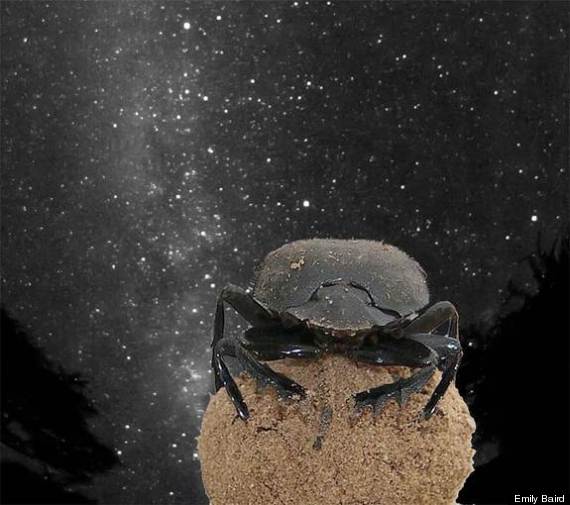 Dung beetles use the glow of the Milky Way galaxy to navigate.

Finally, these and other scientific inquiries are getting the recognition they've long deserved. And while some recipients are in on the spoof on the Nobel Prizes and enjoy the laughs as much as the spirited audience, others are apparently nonplussed by the honor bestowed by the Ig Nobels.

Notably absent, for example, was the winner of this year's Ig Nobel Peace Prize, Belarus President Alexander Lukashenko, who declared it illegal to applaud in public. He shares the prize with the Belarus State Police, who arrested a one-armed man for clapping. But neither of these visionaries sent representatives to the unceremonious ceremony.

Another no-show was the winner in the Safety Engineering category, Gustano Pizzo, who invented an electro-mechanical system to drop would-be airplane hijackers through a trap door, seal them in a package, and then parachute that package — hijacker and all — into the arms of the police. Sadly, Pizzo died in 2006 before he could receive his Ig Nobel Prize, which comes with a $10 trillion bill (a $10 trillion Zimbabwean dollar bill, that is).

And though there's no category for research that could be greeted with a resounding "duh," the winners of this year's Ig Nobel Psychology Prize were a group of international scientists who confirmed that people who think they are drunk also think they are attractive. Their gobsmacking research was published in the prestigious British Journal of Psychology. 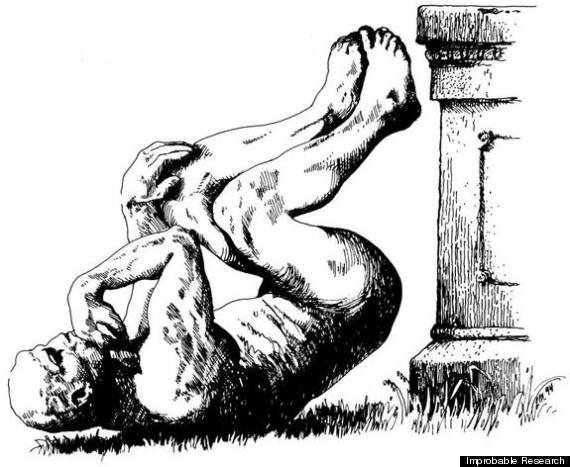 "The Stinker" is the official mascot of the Ig Nobel Prizes.

Among the highlights of this year's ceremony was the premiere of an original opera in four acts, "The Blonsky Device," which celebrates the work of George and Charlotte Blonsky. The couple was granted a U.S. patent in 1965 for a machine that would facilitate the birth of a child by centrifugal force. (The theme of this year's award ceremony was Force.)

The Blonskys' innovation featured a large circular table onto which a pregnant woman was strapped. Like a giant record player, the table — and its passengers — rotated at high speeds. For their invention (which was apparently never built, let alone used), the Blonskys were awarded an Ig Nobel in 1999.

The Ig Nobel award ceremony is, according to the playbill, "reluctantly inflicted upon you by the international science humor magazine Annals of Improbable Research (AIR)."