R. Kelly's "Ignition (Remix)" turned 10 recently, and a group of intrepid fans have found quite the way to celebrate the occasion: Change the national anthem of the United States to the timeless party tune.

That's the notion behind a White House petition filed on the administration's website. Full text and a screenshot of the petition is available below, but essentially the "undersigned" are asking Obama to "recognize the need for a new national anthem, one that even a decade after its creation, is still hot and fresh out the kitchen."

"Ignition (Remix)" was released on Jan. 22, 2003 and begins with Kels telling the listener that he "doesn't normally do this" before memorably noticing that "it's the freaking weekend" and accordingly "having [him] some fun."

At the time of this writing, the petition had nearly 2,000 of the 100,000 signatures it needs to reach by its April 2 deadline. If it reaches that number, the White House is semi-technically obligated to respond, though the administration has been known to ignore some that seem to be making a mockery of the system.

On Monday, a White House official responded to a petition that asked for cell phone unlocking to be legal. The official expressed his support for the idea.

Previous petitions have included a government-commissioned Death Star and other off-the-wall requests. The administration did respond to the Death Star request, citing fiscal impracticality as among the reasons a Death Star will not be made.

Here's the full text of the "Ignition (Remix)" petition:

WE PETITION THE OBAMA ADMINISTRATION TO: change the national anthem to R. Kelly's 2003 hit "Ignition (Remix)."

We, the undersigned, would like the Obama administration to recognize the need for a new national anthem, one that even a decade after its creation, is still hot and fresh out the kitchen. America has changed since Francis Scott Key penned our current anthem in 1814. Since then, we have realized that after the show, it's the afterparty, and that after the party, it's the hotel lobby, and--perhaps most importantly--that 'round about four, you've got to clear the lobby, at which point it's strongly recommended that you take it to the room and freak somebody. President Obama: we ask you to recognize the evolution of this beautiful country and give us an anthem that better suits the glorious nation we have become. 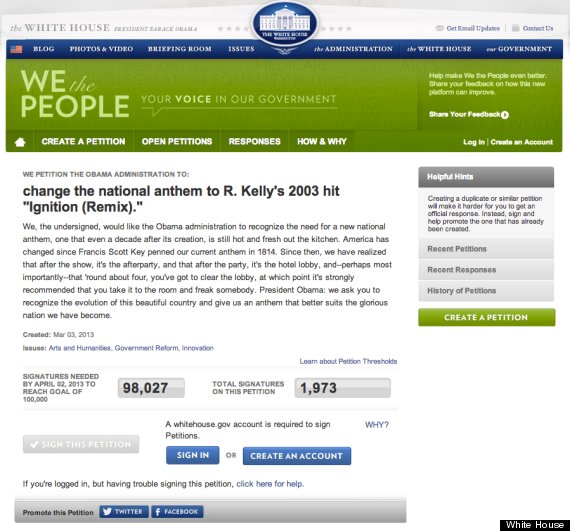