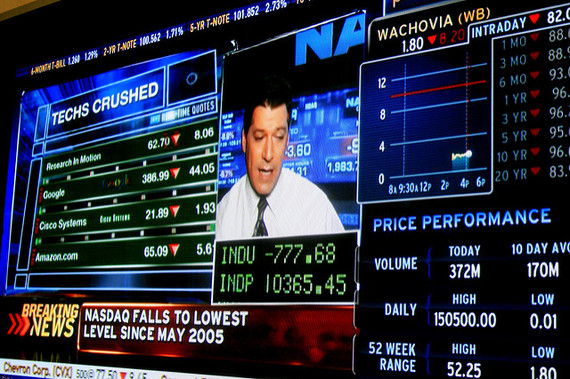 Almost every day I get an email from a concerned investor. Their litany of worries includes the terrible start to the year, market uncertainty, geopolitical risk and concern over who will be elected as the next president of the United States.

These investors are easy prey for the steady drumbeat of "advice" featured in the financial news. The import of much of this advice is to motivate you to "do something" to adjust your portfolio in response to changing market conditions. Examples abound.

Goldman Sachs wants you to short gold on market "overreaction."

Jim Cramer recommends using charts to try and time the highs and lows of the market. There may be worse ideas, but none come to mind. Historically, efforts by "experts" and "gurus" to successfully time the markets have failed miserably.

JPMorgan Private Bank's global head of equity strategy sees opportunity for equities where there is "decoupling" between the price of the stock and increased earnings.

Frankly, when I see the list of fines levied against JPMorgan Chase, I wonder why investors still entrust their hard-earned money to the firm's care. It's seems like relying on the latest predictions of its "strategists" would be the least of an investor's concerns. However, to the extent you may be tempted to rely on any predictions from "strategists" or others, remember this wise observation by Jason Zweig, a financial columnist for The Wall Street Journal: "Whenever some analyst seems to know what he's talking about, remember that pigs will fly before he'll ever release a full list of his past forecasts, including the bloopers."

Instead of relying on market seers, consider this:

At the beginning of the 15-year period ending Dec. 31, 2014, there were 2,711 U.S. stock mutual funds. Only 42 percent of them survived to the end of that period. Surely, those fund managers had extensive resources. Presumably, they had their own analysts and "strategists." Their demise was likely due to bad performance.

Of the funds that survived, only 19 percent outperformed their benchmarks.

If this is the performance of well-educated fund managers, entrusted with billions of dollars in assets and highly motivated to "beat the markets," how do you like your chances?

What if, instead of listening to emperors with no clothes, on Nov. 9, 1992 (its inception date) you just bought and held the investor shares version of the Vanguard Balanced Index Fund (VBINX)? The fund invests roughly 60 percent in stocks and 40 percent in bonds by tracking two indexes that represent broad barometers for the U.S. equity and U.S. taxable bond markets. It has an expense ratio of only 0.23 percent.

This fund has had an average annual return of 8.2 percent since its inception. No market timing, stock picking or paying any attention to the next "hot" fund manager.

I'm not suggesting you limit your stock holdings to the United States. You should be globally diversified. However, the performance of this fund illustrates the returns available to investors who invest in low-cost index funds, don't chase returns and pay no attention to short-term market fluctuations.

You should be one of those investors.