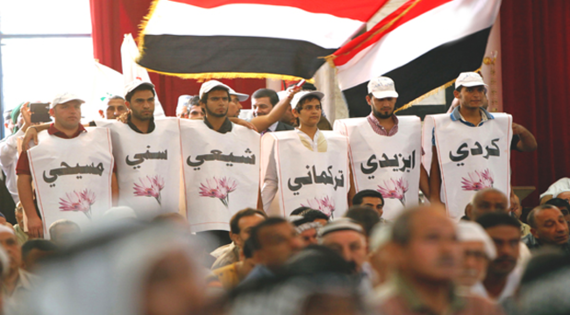 A multi ethnic group, including Iraqi Sunnis and Shias protest against sectarianism in al-Muqdadiyah, Friday, 22 January 2016.

Last month, an improvised explosive device killed a leader of Iraq's Hashd al-Shaabi, or the "Popular Mobilization Units" (PMU), in the Sunni majority town of Gharma. The town is not far from Fallujah, and the PMU are majority Shi'a. If we follow a popular narrative in Iraq post 2003, we may assume this is another case of Sunnis fighting back against a Shi'a security force. According to Reuters correspondent Ned Parker, for example, the US has let "Shi'a militias" "run amok" in Sunni towns. But there is a fundamental problem with this representation.

"The security forces have launched a probe to identify the perpetrators of the assassination attempts on the leaders of al-Hashd al-Shaabi and al-Ashaeri."

Colonel al-Jumaili is a Sunni from the al-Jumail tribe, as was his Hashd al Shaabi colleague who was killed, moreover, the Hashd al-Ashaeri are a pro-government Sunni force. These are Sunni members of the Hashd al Shaabi and by some estimates their numbers reach around 20,000. Add to that the tens of thousands of Sunni police officers and army soldiers. Pay close attention to the news about Iraqi army advances, and you will find Sunni names among the senior Iraqi officers and spokesmen on every front across Iraq.

Be that as it may, you would never know this from the Special Reports peddled by Reuter's Ned Parker, which are often one sided, confused, and guilty of engaging in partial journalism based on a modus operandi defined by cherry picking of facts. In May 2015, for example, Reuters ran a special report on al-Hashd al Shaabi supposed "looting and house burning" in Tikrit. The report noted how "Sunni lawmakers who visited Tikrit complained that events have spun out of control since the security forces and militias retook the city," before immediately adding, "(Sunni) Parliamentarian Mutashar al-Samarrai credited the government with orchestrating a smooth entrance into Tikrit. But he said that some Shi'a paramilitary factions had exploited the situation."

The most notable aspect of the report is the mention of "some factions." The PMU is comprised of around 40 different groups, many of them with Sunni members and particularly in the Tikrit area, where thousands of Sunnis from the Jubour tribe have joined up, as Abed Mutlak al-Jubouri says, "there is a new reality. Sunni, Shi'a, everyone is fighting ISIS."

Parker's Tikrit report neglects to mention that while it is likely some Shi'a fighters were involved in house destruction, the violence appears to have been led by the Sunni Jubour tribe, who attempted to exact punishment on locals who had sided with ISIS. In fact, by some accounts the majority of property destruction was committed by angry locals. This is logical enough, given how brutal ISIS have been to Sunnis. So why does a supposedly impartial, professional journalist insist on reducing the variegated socio-political conflict of Iraq to simple, lazy, and neo-orientalist notions depicting irrational warring between Shi'as and Sunnis?

Later, Sheikh Abdul Hamid al-Jabouri, a Sunni tribal elder with the Jubour tribe admitted that some families accused of links to ISIS would not be permitted to return to al-Alam, near Tikrit. Again, this is not a Shi'a punishment against Sunnis. The special reports of Reuter's correspondent Ned Parker do not illustrate such nuances, instead portraying a sectarian battle of "Shi'a militias" constantly tormenting Sunnis.

Some publications however, have managed to paint a balanced picture, with one New York Times piece highlighting Sunni participation in Shi'a paramilitary groups in the immediate aftermath of the Tikrit battle, and also noting the risk of Sunni on Sunni tribal violence. Parker instead chose to warn,

"If Sunnis dislike what they see in Tikrit, they may not back the government's efforts against Islamic State."

Over a year later, this warning simply has not come to pass, as the story of the Sunni Hashd Colonel mentioned earlier illustrates: Sunnis are fighting for the Iraqi government because of what ISIS have done to them, not joining ISIS because Shi'a Hashd have entered their towns. Almost exactly a year before the battle of Fallujah in the spring, there were 4000 Sunnis rallying in southern Anbar to fight ISIS, the same number that US spokesman Steve Warren announced would take part in the Fallujah battle.

Undoubtedly however, there have been atrocities, carried out by both Sunni and Shi'a Hashd fighters, against their former tormentors ISIS, and in some cases against civilians. Parker refers to allegations in Saqlawiyah, where a mass grave of ISIS victims, some 400 civilians and soldiers was found in June, a discovery announced by the town's mayor. For his latest report, Parker has apparently researched allegations of a massacre by members of Hashd unit Kataeb Hezbollah, thought to be several thousand strong; in other words, less than 10% of the Hashd al Shaabi.

For his Fallujah's special report, he relied upon "interviews with more than 20 survivors, tribal leaders, Iraqi politicians and Western diplomats." But their testimony is very thin throughout the piece, and in Iraq political identity often strongly informs testimonies. While these claims need to be taken seriously and immediately investigated, the initial problem is that one unit of Hashd (Kataeb Hezbollah) is being used to slander a force that, as noted, comprises thousands of Sunnis, and in some cases has been invited into Sunni majority areas by Sunni Sheikhs. Generally, Parker follows a problematic methodology that has little basis in social sciences. Eye-witness accounts are not always true or representative of events on the ground. He does not place the testimonials within the socio-political context. For example, how does he distinguish between the testimony of a partisan local vexed at the status quo and its seemingly favourable relation to Iraqi Shiʿas, and between a genuinely persecuted local who may have very well been the victim of some sectarian PMU unit? This isn't entirely clear in his reports.

Secondly, we must also be aware of eyewitness bias; in June, a sheikh in Anbar told the Daily Beast that 300 Sunnis had been "buried alive" by the Hashd al Shaabi, but nobody has since mentioned this claim--the claim has seemingly vanished and was not even mentioned by Anbar Governor Suhayb al-Rawi. Al-Rawi has demanded an investigation into the Saqalawiyah allegations, therefore it follows that if 300 people had been buried alive he would, at the very least raise this. But it was simply reported as fact.

Whether stories are exaggerated or not, atrocity allegations must be met with zero tolerance from the Iraqi government. Encouragingly, Grand Ayatollah Ali al-Sistani has been consistent in his pleas for Iraqi security forces to protect the Sunni population. In Salahaddin and Anbar, where thousands of Sunnis have signed up to fight terrorism, it appears Sistani's wish is overwhelmingly being respected. If it were the case that the Hashd and the Iraqi Army really were leaving a trail of atrocities in their wake across Iraq, the number of Sunnis in their ranks would likely be few to nil and progress against ISIS would be slow as hundreds of thousands Sunnis resisted.

Parker, claims that "Sistani's pleas and the American threats (to uphold human rights) fell on deaf ears", when in fact Sistani's call will likely be upheld, as it derived from the Prophet's directives. If anything, humanitarian aid missions to Sunni areas led by Hashd al Shaabi units and Iraqi army units have been nothing but exemplary, with Shi'a Hashd units facilitating aid drops by the Preemptive Love Coalition.

Meanwhile, US calls for Iraq to observe the rule of law are part of their commitment as a former occupier of Iraq and current partner in the War on Terror to make sure Iraq preserves human rights. But in an incredible over-simplification, Parker accuses the US of allowing "the Shi'ite militias to run amok against their Sunni foes."

It is this basic reduction of such a complex problem that, ironically, could fuel a regional sectarian narrative about Iraq and push peace further away. In this respect, Parker's claim that "Washington has fueled the Shi'a-Sunni sectarian divide that is tearing Iraq apart" is not only an over-reaction, it is a dangerous one, but one that unfortunately is being taken by some observers as "analysis."

It's very alarming to see Reuter's "Special Reports" being so heavily dependent on such biased and ill-informed assessments. In fact, I would not be surprised to read forthcoming reports depicting an imminent "sectarian holocaust against Sunnis in Mosul," in spite of the aforementioned Sunni participation in the coming battle. Unfortunately, appearing in such a prestigious outlet such as Reuters, many will again simply take this as fact. I would encourage readers to investigate further afield and draw their own conclusions.