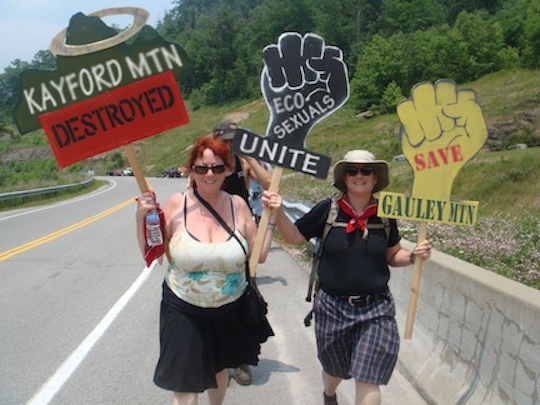 Eco patriotism gets a delicious and effective makeover in Goodbye Gauley Mountain: An Ecosexual Love Story. And leave it to two enterprising lesbian filmmakers, who also happen to be in a love affair with Mother Earth, to effectively capture the heated dilemma of mountaintop removal and the dramatic ripples effects it has on the environment.

The ladies in question are Elizabeth Stephens and Annie Sprinkle--partners in life, art, and civil rights and eco activism--and they have given birth to one of the most seductive environmental documentaries of the year.

It premieres at a special screening in Charleston, West Virginia Saturday, August 17.

The practice of mountaintop removal mining (known as MTR) to access coal has alarmed activists near and far. It all begins with the clearing of trees on a mountain, followed by the drilling of blast holes, which are then filled with a potent mix of ammonia nitrate and diesel. The holes are ignited, an explosion happens, and that's the grim end of the mountaintop--and the lives of any remaining plants and animals. Nature's leftovers are basically shoved off of the mountain and sent down into the valley below--again, decimating any vegetation, animals or streams that happen to be in its destructive path. As the doc explores the matter in West Virginia, we're told that more than 500 mountains have been obliterated and 1 million acres of forest have literally been eradicated.

But those are but a few of the alarming facts we discover here. In between, the audience is offered a heartfelt look at the people, the towns, the companies responsible for the drama and more. Although Stephens narrates the story, the duo produced, directed, and star in the film together. But it's Stephens who gives the film much of its heart. Part autobiography, part coal mining history, and part performance art soiree, the sobering mix of honesty and playfulness is downright infectious.

It's as if Michael Moore and Morgan Spurlock crawled under the eco bedsheets with each other and spawned an offspring you can't help but root for.

Stephens' interest in MTR--and her love of West Virginia, in fact--have long threads. Her family's mining roots reach as far back as the 1600s--beginning in Cornwall, England. Stephens was born in Montgomery and in the doc, she notes how was raised to marry into the coal business. Somehow, she made the journey west, to California, instead, and eventually became an artist and professor at UC Santa Cruz. She married Annie Sprinkle, also an artist and a notable feminist adult film star, who now boasts a PhD in human sexuality.

Together, they make for an eclectic couple and have been life partners--and juicy collaborators in art--for 12 years. Over the last decade they have produced 16 performance art weddings--two of the weddings revolved around them; the remainder were creatively dressed in environmental wrappings and revolved around making vows and marrying nature entities.

Their activist strategy to shift the metaphor from "Earth as mother" to "Earth as lover" has been generating buzz over the last few years. And their declaration that they are "ecosexuals" certainly factors into the mix.

"The Earth is our lover," the duo notes on their website. "We are madly, passionately, and fiercely in love, and we are grateful for this relationship each and every day. In order to create a more mutual and sustainable relationship with the Earth, we collaborate with nature. We treat the Earth with kindness, respect and affection."

The women often lecture and/or perform at universities and other portals, raising the level of awareness on a number of environmental concerns.

But Goodbye Gauley Mountain, which has been three years in the making and is now making the rounds at a variety of film festivals, is a keeper. It will go down as one of the most creative romps to shed light on "King Coal" and the profound tragedy taking place in the Appalachian Mountains.

Photo (above): Jordan Freeman. Check out the film's trailer below: 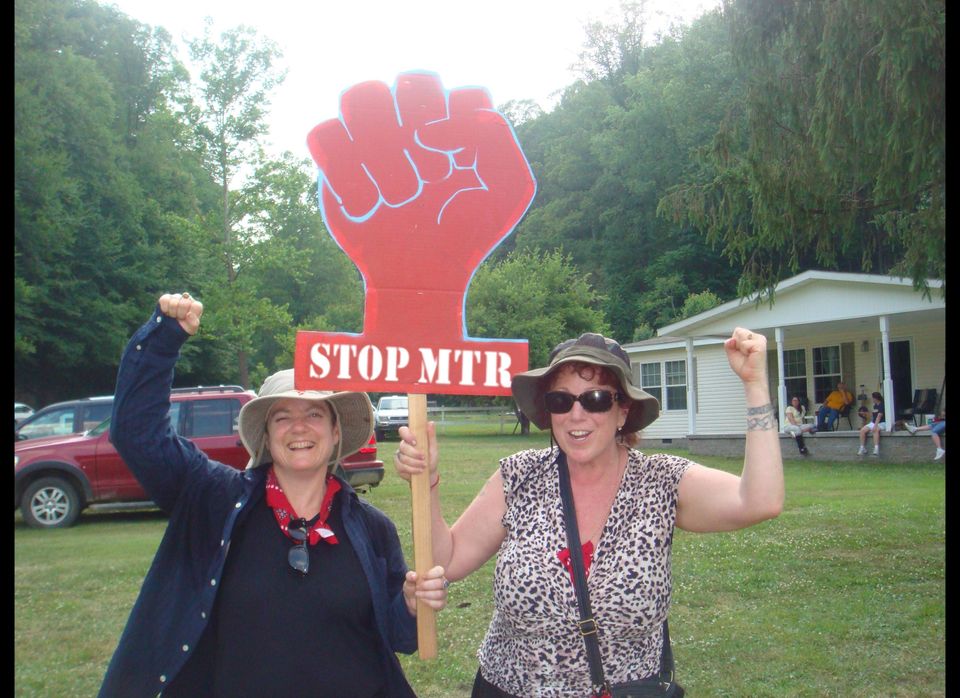