I'm a big fan of Fox TV's Hell's Kitchen, and not because of any particular fascination with the preparation of food. Sometimes it's interesting of course, but the chief draw of this series is the often comical interaction of the chef competitors and celebrity chef/entrepreneur Gordon Ramsay, who sometimes is more tyrannical than a storm trooper, and is certainly as fierce as a marine drill sergeant. 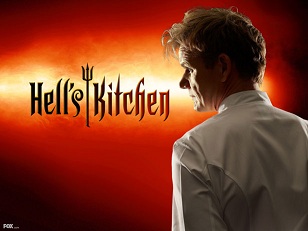 In addition, the internecine rivalries and sometimes burlesque arrogant portrayals of the contestants are alternately painful and hysterical to behold in their bids to win the grand prize to become executive chef at one of Ramsay's restaurants.

Now, in fairness I'm not even an experienced amateur chef, and rarely prepare anything close to an exciting meal for guests. However, I have eaten at so-called fine restaurants -- many of which are renowned -- and I have to take issue with Gordon Ramsay's presumption that he knows better than most about whether food has good taste.

All taste, of course, is personal, whether we're talking about good taste in stylish stuff such as clothing, furniture or design, but even the most knowledgeable cultural authorities or hippest folks might be at odds when it comes to the distinctive predilection experienced in the buds of our mouths. Even so, in this area the egocentric Ramsay thinks he is unmatched, and to judge each player's acumen, he often features a little game in which he tests the palate expertise of his would-be chefs.

He will blindfold them as he did on this week's double episode and ask them to identify what he places in their mouths. Invariably they will more often than not get the food description wrong. If he gives them filet mignon, they answer it tastes like chicken. If he gives them iceberg lettuce, it will horrify him that they respond with Romaine.

Now, regarding that part of the taste test I won't protest, because as Ramsay often demonstrates through attempts to trick the contestant it is important that the proper ingredients are present in a dish before it is passed on to the servers, who deliver the much awaited meal to the diners in his ultra expensive restaurants. So, when his professional chef colleagues hand the contestant pork instead of veal as the harried chef wannabe inspects it at the "pass station," it should be immediately noticed and sent back for the appropriate substitution to ensure that the order is correct.

However, another of Ramsay's taste tests, with which I firmly disagree, is when he displays five or six dishes in front of the contestants and asks them to reveal their favorites. Secretly, the viewers are given a head's up that all of the "prepared" food but one has come from a fast food outlet or a deli counter. To his shock and our amusement, the chef candidates, each of whom has professional experience of one form or another, mostly choose one of the dishes that didn't come from one of Ramsay's exalted restaurants.

In Wednesday's episode, chef competitor Sabrina Brimhall chose Chinese egg rolls that emanated from a take-out place. Nona Sivley chose a chicken sandwich from a gas station convenient store refrigerator. Only Rob McCue chose the chicken wings that were cooked at Ramsay's London West Hollywood establishment. As an amusing afterthought, Nona giggled, saying she didn't like the wings at all, and Gail Novenario said she also thought the chicken sandwich was good.

However, Ramsay's snobbism was such that he said, "The truth of the matter is your palate is in need of desperate work." To that, I say Bull! I don't care who Gordon Ramsay is and how accomplished he may be in the kitchen. It's one thing to be able to discern ingredients. But, as to the matter of what's pleasing, one doesn't learn it, the satisfaction instead is earned.

While I can't begin to match the number of fine restaurants where Mr. Ramsay has eaten, I can say there've been instances at well-known and acclaimed gourmet spots where I have been extremely disappointed with, for example, a pasta sauce that, hold onto your hats, didn't match the flavor of the contents in a Prego jar.

How does that make me wrong and how does it make Gordon Ramsay right or, worse, that I'm some sort of philistine? If something is truly better it should be apparent. Maybe you don't know why or what's actually in the meal you're eating, but if it's fabulous it should be like the first time you had sex. Your body tingles in a manner you've never felt before. However, if it's bland or unappealing, well, I can only say, I never liked liver and from time to time I continue to try it, and no matter how it's prepared I still don't like it.

His taste -- meaning how the food is appreciated when it rests on my tongue or that of yours -- is no better than ours. The enjoyment of food is a singular essence; it does not need to be studied. Paraphrasing Gertrude Stein with respect to her description of her native Oakland, it's either there or there is no there there.

So, the fact that these contestant chefs preferred the fast food/deli counter fare to the chicken wings at Ramsay's revered restaurant is perhaps more an indication not that what they ate was so terrific, but that Ramsay might consider rethinking some of the recipes he features on his menus.