Seventeen days after KFC launched its infamous double down creation to a storm of coverage and opinions, IHOP is introducing its effort at grabbing headlines (guilty as charged) with its own middle finger to responsible eating, the AP reports.

IHOP's "Pancake Stackers" will be a limited-time offering through June 20, and consist of: a layer of cheesecake sandwiched between two pancakes, available in strawberry, blueberry, or cinnamon apple, all topped with whipped cream. They will be available a la carte or as part of a combo meal, with eggs, hash browns, plus bacon, porks sausage links, or ham, which will tally up to 1,250 calories -- over twice that of a 540-calorie KFC Double Down.

Said Carolyn O'Keefe, IHOP's senior vice president of marketing, to the AP: "It's an opportunity to give our guests another reason to come into IHOP." 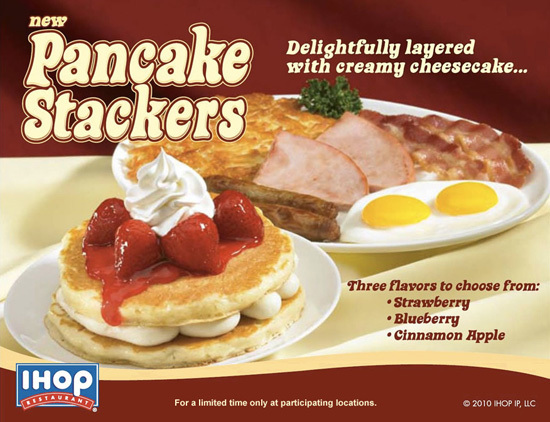