I very much looked forward to seeing Inception starring Leonardo DiCaprio, who is my favorite actor. He's not your typical movie star, often choosing roles, however much the lead, which are really character portrayals in spite of his increasingly handsome looks. And the pre-release buzz has been fantastic in newspapers and magazines.

Which is why I was so disappointed from the get-go in the lavish effects-laden Inception, written and directed by Christopher Nolan, late of the blockbuster Batman smash hit, The Dark Knight. Unfortunately, the story of Inception, however fanciful and intriguing in log-line terms and even in the movie trailers, doesn't deliver and takes us through a meandering morass of sometimes mishmash proportions that had me looking at my watch several times throughout its overlong two hour twenty minute length. 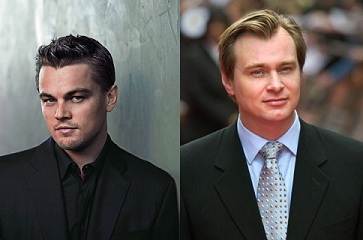 DiCaprio is Dom Cobb, the leader of a dream team, not to be confused with the USA basketball team at the 1992 Barcelona Olympic games. He and his minions, including the wonderful Joseph Gordon-Levitt and Juno's affecting Ellen Page are engaged in an overly explained technical process of invading other people's consciousness in order to learn secrets for a variety of reasons: wealth, power and, if we are to believe Ken Watanabe's character, world security.

The only problem is that others are onto their game and equally adept, so that at any point while DiCaprio's group is fully engaged in a dream, with all of his colleagues somehow aware of what they're doing, which is in itself quite remarkable, their antagonists are also capable of changing the course of events, causing all sorts of havoc with their surrogates called projections, who menacingly engage Leo and his gang.

I won't tell more and risk spoiling a plot that is frankly spoiled by its very inception, or should I say conception. I will only say Nolan's heavy-handed story contrivances are so complex and require constant explaining by DiCaprio and the other characters that whatever acting talents they all have, and in this group, which includes Michael Caine, Cillian Murphy, Marion Cotillard, Pete Postlethwaite and Tom Berenger they are plentiful, it is often painful to behold.

One has to concentrate so hard to take in the convoluted dialogue proffered by DiCaprio, who is so gifted and is normally so natural and believable that it takes away from the artistry he portrayed in films as diverse as The Aviator, The Departed, Blood Diamond and Catch Me If You Can. None of those films was perfect, but they offered him a chance to show so many dimensions of his own boyish character, and in some instances a persona far from his own, but he still came off convincingly.

With Inception there is very little stretching except for the action sequences, which really don't suit him well in a movie where there's such slight character development or something to sustain our interest. Yes, Dom Cobb has personal problems and throughout all this mayhem longs for the fulfillment of a generally modest wish that one can't help comparing to the title character in ET. We are reminded of this periodically and it is this relatively innocent desire that drives him to fulfill one last project so that he can realize his true objective.

However, the film with its intricate dreams and sub-dreams and sub-sub dreams (dreams within dreams within dreams that have rules of their own) is so complicated that in attempting to follow the cutting back and forth to characters simultaneously engaged in the different states of dreams, it made one long for the seemingly simplistic flash sideways of the last season of ABC's Lost, which seems like a child's fairy tale in comparison.

I have no idea how this film will do at the box office, though it needs to do very well to pay back the $160 million it cost to make. And the money spent is evident on the screen, with locations in Paris, Africa and Japan, just to name a few. However, it's hard to believe the word of mouth on YouTube, Facebook and Twitter will be good and that the average moviegoer will flock to see it.

I look forward to Leo DiCaprio getting an Oscar, but I doubt that Inception will do the trick. Then again, he does have the earlier released Shutter Island, and perhaps it will be re-released in time to remind the Academy voters that he's indeed a splendid actor.