The new website IJustMadeLove.com lets users tell the world when, where, and even how they had sex.

IJustMadeLove.com is sort of a combination of Google maps, Loopt, and Twitter -- with sex.

And lots of it: at last count, 11, 694 people had posted their most recent romantic rendez-vous'.

Want to post your latest lay? Click the button "Yes, I just made love!" (you'll be met with a cheery, fist-pumping "Congrats! Show us the spot"), and then you can zoom in on the very street (even building!) where you got lucky. See a screengrab below: 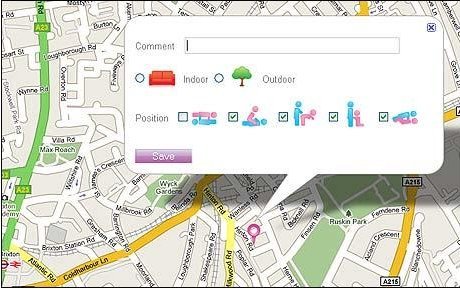 (The site is powered by Google Maps)

You can explore other people's sexual encounters (depicted by blue and pink colored humping bunnies) on a global or local scale. (Couldn't that get weird for college students on a confined campus?)

So far, it looks like Americans are in the lead for lays. The Telegraph reports:

An arguably disappointing 804 were from the United Kingdom, compared to 4,409 in the United States. A mere seven, however, admit to having had sex in Saudi Arabia.

You can also sort results on the love map by displaying posts from the last month, week, day, or hour.

The Telegraph also notes that there are some limits: "Once a user has added his or her moment of passion, the site prevents them from making another for a realistic 20 minutes." Hope that doesn't cramp your style.